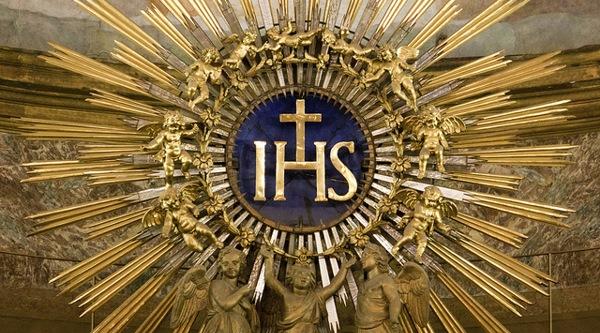 The Society of Jesus celebrates its titular Feast of the Most Holy Name of Jesus on 3 January (although in most places, due to the celebration of the Epiphany on Sunday 3 January, it is transferred in 2016 to 4 January). Fr Tim Byron SJ of Manchester’s Holy Name Jesuit Community explains the history of the devotion and invites us to embrace it this year.

One of the things that I have often admired in Islam is the respect for prophets’ names. The reverence that this expresses is something that has always been important to me: I have a lingering memory of bowing my head at Jesus’s name when praying the rosary at primary school in Merseyside. Researching this article I discovered that the inclination of the head at the name of Jesus as a devotional practice was decreed – yes, decreed! – by Pope Gregory X at the Second Council of Lyon in 1274.[i] So from thirteenth century Lyon all the way to 1980s Crosby…. that is impressive staying power!

The devotion to the Holy Name of Jesus has waxed and waned for 1500 years in the Church, a pattern it shares with other devotions. It is still strong in certain parts of the global Church – particularly in the Caribbean, Philippines, parts of Africa and, believe it or not, the US military; however, in Europe it seems to have gone the way of many other sometime-cherished devotions and remnants of its popularity are now hiding in grandparents’ attics, gathering dust. But it is a devotion with a fascinating history, and perhaps it is the time for it to make a comeback in the UK, not least because of Pope Francis’ stress on the deep value of the popular devotional life of the Church.

The abbreviation of IHΣΟΥΣ, the Greek for ‘Jesus’, in the form ΙΗΣ (‘IHS’) appears in manuscripts from the second century, but it was in the Middle Ages that devotion in these isles took off.  St Anselm, the twelfth century Archbishop of Canterbury, wrote a very popular ‘Prayer to the Name of Jesus’. St Bernard of Clairvaux, the great reformer of the Cistercians, preached a famous sermon in which he described the Holy Name as a balm which has three qualities: healing, nourishing and illuminating. This sermon still survives in the office of readings for the feast. This Year of Mercy that has been called by Pope Francis, who has likened the Church to a field hospital, stresses the importance of healing coming first.

It was in the 15th century that a Franciscan, St Bernardine of Siena, created a new impetus for the devotion, with the creative use of props. At the end of his sermons he would display a tablet bearing the letters of the Holy Name in gold. This was received enthusiastically in the days before CGI, but as always, it became too popular for some. The Dominican Girolamo Savonarola fulminated that Bernardine was treating it as some sort of charm and summoned him to Rome. His indignation backfired as Pope Martin V listened to a careful and thorough exposition of the Cult of the Holy Name and wholeheartedly endorsed devotion to the Holy Name, giving Bernardine prestige and authority. However, to clarify any future attempt to derail enthusiasm for the Holy Name, the pope asked for the crucifix to be added to the letters so ‘Ihs’ became ‘Iħs’, as can be seen in the coat of arms of Pope Francis . The crucifix often either hovers above the ‘h’ or is incorporated into its stem.

The Dominicans, perhaps to make up for Savonarola’s misplaced zeal, started Confraternities of the Holy Name of Jesus and famously Joan of Arc had a great devotion to the Holy Name, her dying words being ‘Jesus, Jesus, Jesus’... and all of this was before the Society of Jesus even arrived on the scene. So although Ihs or Iħs are often linked to the Jesuits, it is good for us to remember that we were latecomers to the scene and it is a devotion of the universal Church. According to Nadal, it was only after the vision of La Storta that Ignatius insisted on the Holy Name becoming the titular name of the Society of Jesus,[ii] in the face of much indignation and opposition.

The Holy Name in Manchester

When the Jesuits built their church in Manchester – an impressive Gothic structure which now stands in the middle of a sprawling university, a huge hospital and the Manchester Academy, a world famous music venue – it was never intended that it would take what has become an iconic title in the North West.

Built in 1871, the church was a sign of the confidence and the ambition of the recently restored Catholic Church in England and Wales. Originally it was to be named the ‘Gesù’ after the mother church of the Society of Jesus in Rome, where St Ignatius is buried. A temporary church was indeed named the Gesù, although it was locally known as ‘the Shed’. However, the Bishop of Salford, William Turner,[iii] suggested that the Gesù would sound strange to the local Catholic population, whose numbers had swollen with refugees from the Potato Famine in Ireland, whereas the Holy Name would make more sense. It seems he was right, as the Holy Name has taken on an iconic status in Manchester – a reminder to us Jesuits not to fall into the trap of speaking our own language![iv]

In his Apostolic Exhortation, Evangelii Gaudium, Pope Francis writes that popular piety is not,

...devoid of content; rather it discovers and expresses that content more by way of symbols than by discursive reasoning... It is a legitimate way of living the faith, a way of feeling part of the Church and a manner of being missionaries... Journeying together to shrines and taking part in other manifestations of popular piety, also by taking one’s children or inviting others, is in itself an evangelizing gesture.[v]

The Feast of the Most Holy Name of Jesus is a good time to take up Pope Francis’ invitation to us to become evangelisers, by embracing and proclaiming the respect due to Christ’s name and remembering its power to heal, nourish and illuminate.

And I will call upon Your name

And keep my eyes above the waves

Fr Tim Byron SJ is Chaplain to the Manchester Universities and is a member of the Holy Name Jesuit Community in Manchester.

[iii] Bishop William Turner, the first Bishop of Salford 1851-1872, and an ancestor of Fr Freddy Turner who would be headmaster at Stonyhurst from 1961-63

[iv] See the Jesuits in Britain’s ‘Jesuit Jargon Buster’; and the recent ‘Do you Speak Ignatian?’ series from Xavier University.