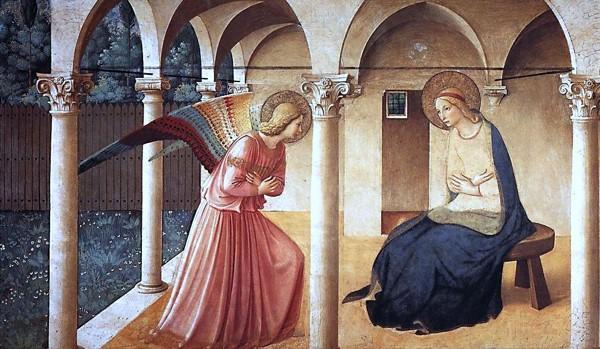 The Annunciation has been rendered countless times by artists over the centuries, and Fra Angelico’s fresco is surely one of the most familiar and celebrated depictions of the encounter between the angel Gabriel and Mary. The arrangement of the scene draws the viewer into the most intimate relationship that is being established despite the distance between the figures – how is James Hanvey SJ moved to respond?

San Marco is one of the gems of Florence. It is the Dominican friary, once the residence of the preacher Savonarola and also of one of the most remarkable and innovative artists of the 15th century, Giovanni da Fiesole, more commonly known as ‘Beato Angelico’ or ‘Fra Angelico’.

San Marco is almost a gallery of Fra Angelico’s work. As you go through the friary his work comes to meet you; it invites you to stand before it. Fra Angelico will not let you be a fleeting tourist. He quietly holds you, insists that you attend; stop looking, and see with interior eyes.

Not only is Fra Angelico’s work artistically innovative, it is also contemplative. This is especially evident in the works painted on the walls of each of the cells occupied by the Dominican friars. These are smaller, often very personal and mystical works, designed to serve the prayer of the occupant and draw him into the mystery of salvation. All the scriptural scenes depicted are made up of faces and landscapes that any inhabitant of Florence and the surrounding countryside would recognise. The event is not some moment in the past, it is now, in this place, and I am part of it. In his use of space and light, and also the quiet dynamism of his scenes – sometimes they appear to anticipate the surreal, especially when they are compositions of the instruments of the passion – Fra Angelico moves away from gothic conventions. The frescoes are sparse, the people and their gestures are clear but not too busy; light and space are created out of the careful interplay of place and people. In this way Fra Angelico produces a sense both of stillness and amplitude, even within a small frame, that makes room for us.

All of these features are on display at one particular location in San Marco: at the top of the stairs leading from the public spaces and works of the ground floor to the upper floor where the friars have their cells. The top of the staircase is framed by ‘The Annunciation’.

It is not by accident that we rise up the staircase into its presence; it marks our entrance into a different level of life: from the busy world of the friary below into the space for rest, prayer and meditation upon the word/Word of God. This private space becomes a sanctuary for the friars (or us) to meditate upon the mysteries of Christ’s life and, in the silence, open the interior space of the attentive mind and heart to hear the word. The invitation at the base of the fresco is to pause and say an ‘Ave’. We stand on the threshold not only of public and private spaces, but exterior and interior worlds, the interplay of nature and grace. Fra Angelico’s faith imagination is always drawing inspiration and depth from that admirabile commercium – the ‘wonderful exchange’ – of the incarnation.

By placing ‘The Annunciation’ at the point between the two dimensions of the friar’s – and the viewer’s – life, the active and contemplative, Fra Angelico makes us ‘ascend’ into the moment. The space of the scene is arranged so that we too stand just before the loggia. Although the loggia is itself well defined and has the stillness of a cloister, it is also filled with thresholds: we can see from the outer space of the garden to the enclosed space of the encounter, and within it the suggestion of the door leading further to the inner chambers of the house.

Not until we are directly in front of the scene do we notice that the figures of the angel and Our Lady are massive, too large for the space in which they are meeting. It would be impossible for them to use the small door and the tiny window positioned between them. Fra Angelico was certainly aware of Masaccio’s innovative use of mathematical perspective, so the disproportionality must be intentional. It takes effect from the bottom of the staircase and allows the figures to grow as we approach until we stand before them, held and overwhelmed. It is as if all the time Fra Angelico is moving us from being viewers to beholders. The very size of the figures comes to fill the whole scene, evoking in us a deeper response, an ‘experienced understanding’ with the interior eyes of faith; it cannot be articulated, only held and pondered.

‘The Annunciation’ is remarkably uncluttered. There are just two figures: Mary, wrapped but inclined towards the angel, who makes the subtlest of movements towards her. These understated physical gestures carry a quiet intensity of attentiveness. Neither the angel nor Mary speak, yet we are in no doubt that they are communicating. Although they do not touch, they are in the most intimate relationship. They, too, are caught in the event which is happening; it is all the more absorbing because it is not visible, at least to the naked eye.

Again, Fra Angelico almost imperceptibly transfers us from an exterior to an interior space of contemplation. Although the traditional symbols of the Annunciation are absent, in this austerely beautiful moment there is one that delights and carries with it the joy of the encounter. It is the garden, which stands in contrast with the clean and unadorned spandrels. It plays upon the title of Mary, hortus conclusus, a ‘garden enclosed’, which echoes the Song of Songs.

The delicacy of the flowers conveys the skill of the artist, who was an illustrator of manuscripts before becoming a painter. The rich profusion of the garden’s floral carpeting suggests the new spring of redemption; it recalls the first garden from which humanity was exiled and which now is about to be restored. The promise is now, it is here, in this moment uniting two worlds: heaven and earth, external and inward, action and contemplation. We are privileged to be drawn into the moment, to hear the angel’s wordless prophetic greeting and Mary’s response which echoes through time and gathers all creation. What better way to honour Fra Angelico’s ‘The Annunciation’ than to pause, wrapped in the moment, and silently say our own ‘Ave’.

James Hanvey SJ is Secretary of the Service of the Faith for the Society of Jesus.