Skip to main content
Photo by Matt Unczowsky on Unsplash 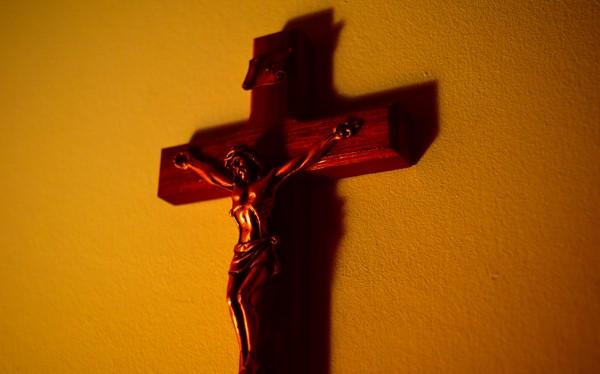 ‘How can a cross, which ostensibly signifies suffering, disgrace and humiliation, be seen as a symbol of hope?’ Teresa White FCJ finds, in poetry and painting, ways in which we can see the light of the resurrection in the midst of the darkness of the crucifixion.

In the season of Lent, ‘this time of tension between dying and birth’,[1] the cross is the unspoken word, the place of solitude and silence. ‘This is the land. We have our inheritance.’ And our land, our inheritance, is most readily expressed through paradox, that amazingly creative way of knowing that mediates between the visible and the invisible, between light and darkness. In the land of our inheritance, the poet tells us, there is ‘Speech without word and/ Word of no speech’; there is calm and distress, memory and forgetfulness, worry and repose, hope and despair, ignorance and knowledge. A paradox is not simply a figure of speech used by scholars and poets to express difficult or interesting concepts: apparent contradictions are part of life. Many things are not what, on the surface, they seem to be. The role of the artist includes looking more deeply into things and seeing that sometimes puzzling inconsistency can have its own truth.

Salvador Dalí’s painting of the crucifixion is a visual paradox: without denying the desolations of reality it points beyond death, and sheds light on the tension between dying and birth. We see Jesus on the cross, suspended in darkness between earth and heaven; yet both the figure and the cross are suffused with light. There are no nails, no wounds, no blood, no signs of the deep suffering and unspeakable cruelty involved in that most horrendous of deaths. The Scottish poet, Edwin Morgan, reflecting on this painting, writes: ‘It is not of this world, and yet it is,/ And that is how it should be.’ For here, ‘“…light and death once met.”’[2] Is he saying that although the cross ends in death, it is open to the life of grace in all its abundance? Dalí’s is a tender picture of Jesus crucified. Here we have ‘the divine Word, spoken inwardly in the silence of the Trinity, outwardly in the created universe, and historically in Jesus of Nazareth’.[3] And the Word is Love.

This painting is not a statement of hopelessness. Jesus appears to be accepting of his destiny: there is a generous nobility in his gesture of embrace, and the whole canvas is filled with a tranquillity that encompasses but points beyond death. It is true that the gentle touch of Jesus, his compassionate glance, have no place here, for his hands are placed on the crossbeam and we cannot see his face. His eloquence, too, is silenced: from this cross he speaks no words of wisdom and blessing and healing, words with which he had captivated the crowds, words through which he spread the good news of God’s love for all people. The men and women who had revered him, called him a prophet, believed him to be the Messiah, now look upon him in his humiliation. His naked body is his message now. For those with eyes to see, the meaning is clear: great suffering, wretchedness and poverty can lead to a flowering of beauty and goodness and love. To those who have nothing, much will be given.

Dalí named his painting, ‘Christ of St John of the Cross’, acknowledging that his inspiration came from a drawing by the 16thcentury mystic of the title. Doubtless he had also pondered the saint’s writings, with their constant allusions to paradox, to the apparent contradictions in the spiritual life. ‘The endurance of darkness’, John wrote, ‘is a preparation for great light.’ The painting shows that, in Jesus, darkness endured leads to great light: in Jesus, death and rising come to pass. In that light, Jesus has moved far beyond the moving reproaches of the book of Micah: ‘O my people, what have I done to you? How have I hurt you? Answer me.’ (6:3) Such reproaches find no echo here.

The cross, the most ancient and widely recognised Christian symbol, is hailed in the 6th century Latin hymn, Vexilla regis, as the spes unica (‘only hope’) of salvation. How could a cross, which ostensibly signifies suffering, disgrace and humiliation, be seen as a symbol of hope? The Brazilian theologian and philosopher, Leonardo Boff, gives an insightful explanation of this paradox:

The cross, then, is the symbol of the rejection and violation of the sacred rights of God and the human being. It is the product of hatred. There are those who, committing themselves to the struggle to abolish the cross of the world, themselves have to suffer and bear the cross. The cross is imposed on them, inflicted on them, by the creators of crosses. But this cross is accepted. Not because a value is seen in it, but because there are those who burst asunder the logic of its violence by their love. To accept the cross is to be greater than the cross. To live thus is to be greater than death.[4]

Seen in this light, the cross is a powerful reminder that God brought victory out of defeat, life out of death, hope out of despair. Elizabeth Johnson echoes Boff’s understanding of the cross as breaking the logic of violence: she says that, ‘Jesus’ brutal death enacts the solidarity of the gracious and merciful God with all who die, and especially with victims of injustice, opening hope for resurrection amid the horror.’[5]

Christians see the cross as the sign of the deepest love in the universe. And yet the cross offers no place of comfort: ‘All you who pass this way, look and see: is there any sorrow like the sorrow that afflicts me?’ (Lamentations 1: 12) The cross invites us to heighten our awareness of the solidarity of God, who accompanies us on our human journey, brings healing and solace in our anguish. The French poet, Victor Hugo, in four brief lines written in memory of his beloved daughter who died tragically, hints that through the cross, God finds us, meets us, shares our sorrows:

You who weep, come to this God, for he weeps.

You who are suffering, come to him, for he heals.

You who tremble, come to him, for he smiles.

After reading this beautiful poem, Charles Spurgeon, a well-known 19th century British Baptist preacher and a contemporary of Hugo, showed a sensitive appreciation of its content when he wrote: ‘Suffering people do not seek the consolation of the Christ who is to come so much as ... that of the Christ who has already come, a man weighed down by sorrow and distress. Jesus is the one who shares our anguish, the one who can say, more legitimately than anyone else, “I am the man who has seen affliction.”’

But death is not the end of the story. We know, with the conviction of faith, that failure and death are not what they appear to be.

Lent: A Way Out of the Shadows

A life spent in love: On the 80th anniversary of Edith Stein’s heavenly birthday
Pierre Favre on the mercy of God
Edith Stein: truth at the service of humanity
Pierre Favre: ‘Everywhere there is good to be done’
Why would anyone want to be a Jesuit today? The wisdom and example of Peter Canisius