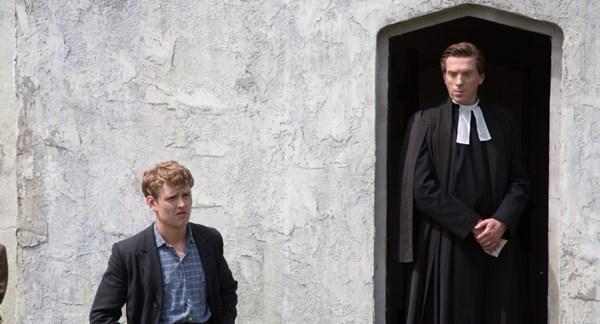 An unpleasant, extremist Protestant minister; an oppressed woman; the arrival of a young, criminal, city-dweller; and a remote Scottish island: this combination sets the stage for a fairly clichéd and limited analysis of the evils of religion in Corinna McFarlane’s The Silent Storm. The themes of authoritarianism, the often-violent oppression of women, the crisis of religion during periods of secularising social change, and tension between religious belief and the natural world, are all worthy of exploration. However, the way they are dealt with in this film is far too simplistic to mount any kind of thought-provoking argument.

Many of the plot failings are hidden by excellent acting. Damian Lewis brings something of Homeland’s highly conflicted Sergeant Brody to this Presbyterian minister, while Ross Anderson gives a good performance as Fionn, the wronged orphan who has been sent to the island as part of a correctional programme. And the film does have other redeeming features: the landscape, as one would expect for a production filmed on a Scottish island, is very beautiful. This being said, the scenery isn’t given the attention of which it is worthy; there are no wide, sweeping shots of the coastlines or the rolling hills. Also worth noting is the extraordinary camerawork: the use of Steadicam gives the audience’s point of view a real weightlessness and allows the viewer to feel involved in the very personal experiences playing out on the screen.

The real problem with the film is its overall premise. Rather than do justice to the complexity of even one of its interesting themes, the film instead challenges a needlessly simplistic view of religion with a confused understanding of nature.

The Christianity seen in this film is nowhere near the experience of most Christians. The Presbyterianism on which it focuses is an easy target. Its restricted idea of predestination leads its adherents to try to see signs of God’s favour within their own lives, a tendency made famous by Max Weber in The Protestant Ethic and the Spirit of Capitalism. They therefore begin to strive after salvation as if it was something earthly that they could achieve: you have to behave like the redeemed, so sin is something to be purged and eradicated. The film’s real target is the extremism and fanaticism that can follow from this, but instead of making this explicit, McFarlane lumps all Christian experience in the same box as that of Minister Balor.

The critique of a ‘religious ideology’ therefore never really gets beyond the basics. In fact most of the issues dealt with here are the stuff of the very first question of the Summa Theolgiae. To give the Thomist answer to the objections of McFarlane: ‘…man is directed to God, as to an end that surpasses the grasp of his reason.’ (To reason, we might also add physical effort.) Because God is outside of our experience, we can’t attain friendship with him in this life, or happiness with him in the next, simply on the basis of our own efforts. This is something we can only achieve by God’s grace. This is a view of God completely alien to Minister Balor, but familiar to most Christians.

The film attempts to pit nature against this angst-ridden Protestantism. In McFarlane’s worldview, nature is beautiful because it is free; and the film relies on Aislin (Andrea Riseborough), Balor’s wife who hates the Protestantism she has been dragged into by her husband’s ministry, to demonstrate this. However, the view of nature presented in the film is really rather confused. Whilst nature is held up as representing everything essentially feminine, the film points to the future in the young man from Glasgow who becomes, in the words of McFarlane after the screening, the male/female blend of modern society. It seems very difficult to celebrate a powerful and natural femininity whilst at the same time hailing the bright future of the performative gender of the late twentieth century.

The greatest confusion comes at the end when the film’s only identifiable Christian action takes place. Aislin stands in the breach between her husband and Fionn, and declares her love. In the end it is love, not some confused concept of nature that wins out against the evils of authoritarian religious practice.

St Henry Morse SJ: ‘A saviour of life unto life’
Alfred Delp: committed to Christ
‘The Fight Between Carnival and Lent’
Ignatius and the Stars
Persepolis