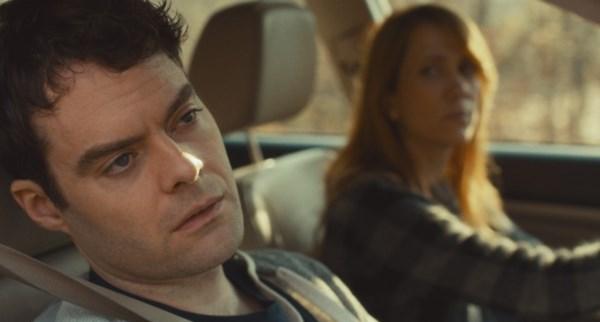 These are the words, something of a lukewarm absolution, that Milo (Bill Hader) offers to his sister, Maggie (Kristen Wiig), after she confesses to having slept with three other men since her marriage. Milo’s wrists are gauzed, which seems to have something to do with the young man in an amorous photograph now abandoned at the bottom of a fish tank.  Even if Milo and Maggie are high on nitrous oxide now, slumped on the floor of the office where she works as a dental hygienist, there is still something a little touching about this makeshift reconciliation.  Admittedly, the moment is cut short when Milo races off to reunite with his English teacher who molested him as a freshman.

The Skeleton Twins might be described as an almost-comedy, a film which might have warmed our hearts had its flawed heroes not been so successful at sabotaging their own.  There is a persistent sensation of never quite getting to the bottom of things, or rather, of half-conscious groping towards existential rock-bottom. What is sought is some kind of misplaced reassurance, something solid and incontrovertible in a world of professional disappointments, suicidal fathers, moral compromises and half-smiles.  Since it seems that both of the main characters are aspiring to complete emotional breakdown, it is hard to be quite sure if we want them to succeed.

Somehow, though, the tone is not particularly grim, even keeping up what might be dubbed a grey cheer.  This can be attributed to the film’s honesty, which is laudable, by-and-large: what we see is what we get, warts and all – or rather, painted moles and all, recalling the Halloween parade which Milo attends made up in gruesome drag. Let’s admit it, sometimes honesty is ugly.

One of the most honest moments of the film, for instance, is when the twins’ mother makes a flying visit to New York from Arizona.  She may have missed her daughter’s wedding in order to go to a new age spirituality convention instead, but at least she’s here now, right?  And she is there to see her son, who has nearly killed himself and is recovering at his sister’s home, isn’t she?  This is the optimistic suggestion made by Maggie’s husband, Lance (Luke Wilson, whose brilliant performance of good-natured, All-American dim-wittedness is almost worth the price of admission alone).  But, alas, it turns out that mother is only stopping by because another of her conferences is taking place down the street at Woodstock, something about cleansing or positive energy or crystals. This is honest and this is hard. There are just bad mothers.

The film’s primary virtue is the courage it takes to show this. Like goldfish in a tank, which is a recurring image, the twins and all their problems are conspicuously on display. There is just a hint, too, when they return to Milo’s in Los Angeles, that this honesty might save them.  If they can just manage to make it in Hollywood, and blow up their troubles to the size of the big screen, then all this grinning agony might be good for something.

But it doesn’t seem to work.  No problems get solved, only acknowledged, and while some pathology has come out of the closet, there are still some serious skeletons in there.  Will Milo go back to waiting tables and continue failing as an actor?  Did he really kick his depression, corrosive drinking and suicidal trajectory simply by electing not to sleep with his teacher again?  Will Maggie stop furtively popping contraceptives out of sheer terror about becoming a mother?  Will she work through her adulterous sex compulsion and/or work things out with her husband?  All of these questions go unaddressed, and the consolation on offer is that at least these troubled children have reencountered family at the rocky bottom of life’s fishbowl.

Maybe this is an image of hope-in-despair, of the twins, like their goldfish, as creatures who are drowning in life yet somehow keep on living.  As an ending to almost-comedy or the beginning of a rebuilt life, this may not be a terrible place, but it is not great.  A good life would seem to require more than honesty and, especially with all the unacknowledged sexual confusion they display, the way to a good life for the skeleton twins may involve some pretty difficult truths.  But then again, maybe good isn’t your thing.