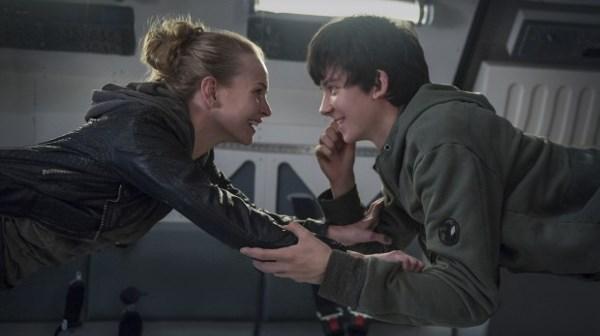 Gardner Elliot (Asa Butterfield) is from Mars. His mother was part of the first mission that sent astronauts to the planet to live for an extended period of time. When it was discovered en route that she was pregnant, rather than abandon the mission, the decision was made to keep her condition a secret and to have her give birth on Mars, with unknown and unpredictable consequences for the child. His mother died in childbirth, leaving Gardner to be ‘raised by scientists in a bubble’. Now 16 years later, he is going to visit Earth for the first time. But there is a complication: having grown up on a different planet, his body, and more specifically his heart, may not be able to cope with Earth’s gravity, and so he must be closely monitored. Being a teenager, however, with no patience for adult worries, he escapes to accomplish his own mission: to find his father. In this he is helped by Tulsa (Britt Robertson), an online friend who is the only person he knows on Earth besides astronauts.

Under this heavy layer of science fiction, The Space Between Us is at its heart a film about teenage misfits: the hard-bitten, world-wise cynic who has spent her life in foster care, and the boy from Mars who knows so little about life on Earth and how to act with people. While travelling across America in search of Gardner’s father and avoiding both the authorities and those concerned for Gardner’s health, they discover the meaning of love, friendship, family and what it means to be human. It is a tried and tested formula with a little twist, and it works well for the most part. There are some awkward bits of dialogue, but it is in the main a funny, light-hearted film. Asa Butterfield and Britt Robertson work well together, and Butterfield is charming as the naïve, open-hearted boy filled with wonder at the ordinary things that make up life on our planet.

I was pleasantly surprised at the pro-life, pro-family outlook of the film. This is not to say that this is a moralising or even a particularly moral movie. Rather, the perspective from which it has been written is in some sense refreshingly old-fashioned, if one is allowed to say such a thing. For example, Sarah Elliot’s pregnancy and the birth of a child on Mars are deeply problematic, but the controversy centres on whether or not to bring her back to Earth and whether or not Gardner’s existence should be public knowledge. Whether Gardner should be allowed to live is never called into question.

There is an interesting moment later in the film in which Nathaniel Shepherd (Gary Oldman), the brains behind the Mars colony, exhibits an increasingly emotional concern for Gardner’s safety, which he explains as the difference between knowing him as a face on a screen and encountering him as a person. This observation can be applied to any number of ways in which we interact with others, especially in our technology- and social media-saturated world, but it struck me most in our relationship to children in the womb and the way they have been dehumanised in the eyes of society. It is much easier to make decisions regarding the life of another human being if we fail to perceive their personhood.

The question of what it means to be human, though central to the story, is never asked explicitly and so never becomes overpowering. The focus is on Gardner’s relationships with others, which are in fact the key to understanding his humanity. This perspective, wherein relationships are integral to Gardner’s humanity, goes against the grain of society’s emphasis on self-determination and the importance of the individual as an individual rather than as also a member of a greater whole. It is very much in line with the Church’s teaching that membership within society is a necessary part of our human nature and enables us to live out our human potential, chief among these societies being the family (cf. Catechism of the Catholic Church, §1878-1881). This same understanding feeds into our conception of the mystical body of Christ, and it informed and is expressed so clearly in John Donne’s famous poem, which begins, ‘No man is an island entire of itself.’ It is an insight that we are losing in our Western society to our great detriment. For the irony is that each individual can only live out his or her greatest potential and true vocation as an integrated member of society, as part of a greater whole.

The Space Between Us | Official Trailer 2 | Now Playing