Skip to main content
Participants in the pre-Synod meeting at St Ignatius, Lethem in Novebver 2018 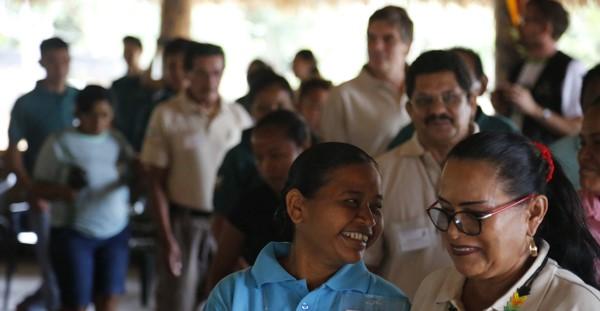 The focus of the Synod of Bishops for the Pan-Amazon Region that begins in Rome on 6 October is anything but narrow – witnessing to the realities of the Amazonian peoples and their wisdom demands the attention and participation of the whole Church. Giacomo Costa SJ explains how the dynamic between the local and the global will be the key to the success of the synodal process that seeks ‘new paths for the Church and for an integral ecology’. [1]

Those of us who do not live in these lands need your wisdom and knowledge to enable us to enter into, without destroying, the treasures that this region holds.[2]

When Pope Francis met with the indigenous peoples of Amazonia at Puerto Maldonado in January 2018, he made it clear that listening to them and all of the communities living in the Amazon is a priority for all non-Amazonians. Before ‘we lend our voice to their causes’, offer solutions or, even worse, impose our agenda and our problems on them, we are called to ‘to listen to them, to speak for them and to embrace the mysterious wisdom which God wishes to share with us through them’.[3] This is not easy, especially at a distance, even if in recent times ‘indigenous peoples have begun to write down their own history and to document more formally their own cultures, customs, traditions, and knowledge’,[4] making their worldview more accessible.

This worldview and the lifestyle derived from it is often encapsulated in the expression buen vivir (in English, ‘good living’), the Spanish translation of expressions from different Amazonian languages, such as sumak kawsay, alli káusai or shien pujut. It is a way of life that has its roots in the indigenous traditions and refers not so much to a codified doctrine, but rather to practices related to creating relationships between individuals and groups through the bond with the land. Therefore, at the core of this worldview are the relationships between water, land, the natural environment, community life and culture. As stated the Instrumentum laboris, quoting an official document of the Amazonian peoples: ‘It is about living in “harmony with oneself, with nature, with human beings and with the supreme being, since there is an inter-communication between the whole cosmos, where there is neither excluding nor excluded, and that among all of us we can forge a project of full life.”’[5] Buen vivir is a question of contemplation, respect and care of the biome of which you are a part,[6] which ‘influences health, life together, education, cultivation of the land, the living relationship with nature and “Mother Earth”, the capacities of resistance and resiliency of women in particular, rites and religious expressions, relationships with ancestors, the contemplative attitude, the sense of gratuity, celebration and festivity, and the sacred meaning of the territory’.[7]

For Westerners, it is essential to listen to these words with our minds empty of the heavy baggage that can weigh us down: from the myth of the ‘noble savage’ to the tension between perceived backwardness and modernity. The Amazonian cultures are something else completely: a highly complex civilisation which for centuries has dealt with the challenges of modernisation and colonisation, and continues to come to terms with both internal and external conflicts and contradictions, envy, anger, violence, aggression, corruption, etc. Buen vivir is not an idyllic condition taken for granted once and for all, but is a path as real as it is fragile. Moreover, it does not exclude a relationship with other cultures: for example, its logic incorporates access to education, health services and other fundamental rights that indigenous people enjoy like any other citizen.

The important thing is to respect the Amazonian peoples’ autonomy in defining the parameters and the components of the buen vivir without applying indicators of poverty, well-being or development which they find alien and possibly incomprehensible. The Western definition of quality of life cannot do without some economic comfort and the attainment of certain levels of consumption. This makes it very difficult for us to understand how people with few material goods and with very limited ‘security’ in life – like most Amazonian peoples – can boast of good living.

At this point, a radical question arises about the definition of ‘a good life’ that is at the foundation of a Western model of progress. In order to take up this healthy provocation, we need to free ourselves from the stereotypes and prejudices that do not allow us to take the Amazonian peoples seriously, so that we can enter into an authentic dialogue with them, one free from any sense of paternalism. As the Instrumentum laboris admits, the problem also applies to the Church: ‘It has a tendency at times to impose a culture alien to the Amazon that prevents us from understanding its peoples and appreciating their worldviews.’[8] So much so that some radical criticism of the Church claims that no evangelisation project is free from a colonial attitude. Pope Francis urges us not to fall prey to these risks: ‘We need urgently to appreciate the essential contribution that [indigenous peoples] bring to society as a whole, and not reduce their cultures to an idealized image of a natural state, much less a kind of museum of a bygone way of life. Their cosmic vision and their wisdom, have much to teach those of us who are not part of their culture’. [9]

For us ‘non-Amazonians’, this means getting used to seeing things from a range of perspectives and accepting being questioned by those of other peoples; rather than acknowledging other perspectives passively out of a Western guilt complex, we should be stimulated by other peoples and in turn stimulate them. Identifying the limits and ideological biases of social and economic analyses coming from Latin American contexts is legitimate, but on the condition that we simultaneously accept their right to draw the conclusion that our ideal of ‘a good life’ is imbued with materialism; that our culture, even our ecclesial culture, exudes not only secularisation, but secularism, and finds it difficult to allow a discernible space for transcendence. Moreover, that the individualism in which we are immersed without even noticing it anymore, makes us incapable of thinking in terms of collective actors, of communities and peoples.

Something similar also applies to a more explicitly Christian and theological agenda: finding suspicious echoes of paganism in certain expressions of the faith must go hand-in-hand with renouncing the idea that there exists a Christian culture par excellence, an unquestionable paradigm against which other models can be judged. The polyhedral perspective of Evangelii gaudium and the primacy of dialogue in the paradigm of integral ecology can also inform the relationship between forms of Christianity enculturated in different contexts. Each must open up to recognise and be grateful for the contribution of the other.

The title of the Synod also indicates its objective: ‘new paths for the Church and for an integral ecology’. ‘New’ should be understood here in in the radical sense that the term takes on in the encyclical Laudato si’ when it refers to ecological conversion, stating that it is essential to ‘once more broaden our vision’ if we want to build a progress ‘which is healthier, more human, more social, more integral.’[10] This is why a genuine ecological culture ‘cannot be reduced to a series of urgent and partial responses to the immediate problems of pollution, environmental decay and the depletion of natural resources. There needs to be a distinctive way of looking at things, a way of thinking, policies, an educational programme, a lifestyle and a spirituality which together generate resistance to the assault of the technocratic paradigm.’[11] An entity that is so delicate and rich in bonds between its different dimensions such as the Amazonian biome is an emblematic example of this need.

The term ‘paths’ chosen for the title of the Synod suggests an icon of the challenge that awaits us, that of the means of communication, which is one of the critical points for the Amazon. The ‘new paths’ it needs are not the highways that many want to lay down – which would contribute to its destruction, with serious consequences for the entire planet. Nor do these ‘new paths’ entail re-proposing the dugout canoes that glide along the rivers, if it means locking the peoples of the Amazon into an idealised past. Let's see how the Synodal Assembly and the processes that come out of it will lay out these ‘new paths’. First of all, it is about involving the communities and peoples of the Amazon with all their variety and differences, being aware that ‘shaping a Church with an Amazonian face includes an ecclesial, social, ecological and pastoral dimension, often conflictual.’[12]

This project involves us non-Amazonians more than we think. First of all, because we benefit from the positive effects of the Amazon region in global environmental terms; and secondly because the contradictions threatening its very survival originate elsewhere and intertwine with the way our global economy works: with models of progress and economic growth that still see the environment as a resource to be plundered, with the choices of large multinationals which are driven only by the quest of maximising short-term profit, and with lifestyles built on the logic of consumerism. On its own, the Amazon will not be able to withstand these formidable pressures: in order for it to continue to exist with its own face, it needs the rest of the world to give it the space to do so. This is a responsibility that involves us all: as consumers, investors, citizens and voters, calling on the creativity of everyone with a view to building genuinely sustainable alternatives.

This is an abridged version of a text originally published in Italian: Costa G., ‘Sinodo per l’Amazzonia: perché coinvolgerci e come?’, in Aggiornamenti Sociali, 8-9 (2019) 533-540 and at www.aggiornamentisociali.it. Translation into English by John Coughlin.

[1] The Assembly has been preceded by a process of preparation and by the publication of the Preparatory Document (8 June 2018) and the Instrumentum laboris (17 June 2019). The texts, together with a great deal of other informative material, are available at www.sinodoamazonico.va. The role played by the Pan-Amazonian Ecclesial Network (REPAM) in the preparation of the Synod is unprecedented. REPAM was established in 2014 with the aim of finding the best ways ‘to incarnate the Gospel among a particularly vulnerable section of the people of God’, according to the words used by its coordinator, Mauricio López (see ‘REPAM: per una Chiesa dal volto amazzonico’, in Aggiornamenti Sociali, 6-7[2019] 512-516).

[9] Pope Francis, Address to the meeting with indigenous peoples of Amazonia.

Respect, recognition and dialogue: the Church in the Amazon

On consulting the Amazon: Newman and the Amazon Synod

The Amazon biome: From ‘backyard’ to ‘main square’