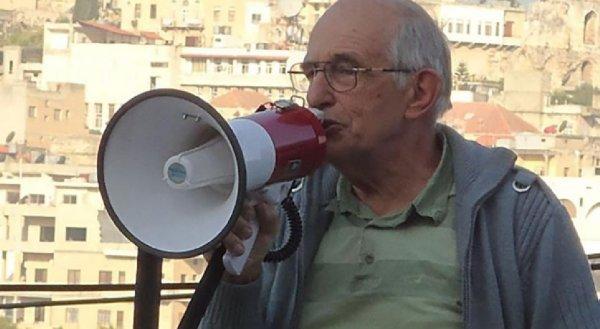 On 7 April 2014, Fr Frans van der Lugt, a Dutch Jesuit who had been living and working in Syria for nearly 50 years, was shot and killed in the city of Homs.  He had refused to leave that city when it came under siege, choosing instead to remain and share the pain and suffering of its people. Writing for America magazine, Patrick Gilger SJ reflects on the life and death of a man who won the hearts of Syrians, using the words of one of Fr Frans’s brother Jesuits in Syria.

Frans van der Lugt SJ – who on April 7 was shot in the head, twice, in front of his home in the city of Homs, Syria – had been living under siege for 20 months when, in January, he recorded a video message challenging the outside world to help. He ends this video, one that made him famous outside Syria and likely contributed to his death within it, by saying: ‘We do not want to die out of pain and hunger. We love life and love living it and we hate to die out of agony. Thank you very much.’

Each Monday the Jesuits of my community here in Omaha have Mass together, and dinner. In between, because we are part of the Wisconsin Province and this is our way, we have cheese and crackers, beers, and we talk about the day: how the class taught by one went, the talk given by another, what we read in the paper, how the students are doing; the normal stuff of life.

On April 7 during this time a group of four or five or six of us stood near our round breakfast table, surrounding a friend of ours, Tony Homsy SJ. It is normal for Jesuit communities to be ethnically diverse these days. In ours there are the usual German- and Irish-Americans along with an Asian-American, a Mexican- American, a young priest from Indonesia, another from Panama, etc. And there is Tony, who is from Aleppo, Syria.

Tony and I are friends. We have become friends over the eight months we’ve lived here in Omaha together, he studying media and journalism, myself learning to be a priest. We’ve seen movies, learned how to tease each other, watched basketball. Friends. But I am still an American; there is no cultural norm in America for how one starts a conversation about martyrdom, even with a friend. Especially when it happened some 12 hours before. So I left it to our Indonesian brother to ask him how he was, and he did.

‘Sure. Yes,’ Tony replied. In the everyday chatter of the recreation room our circle was quiet as we felt sad, too, and waited for his next words.

The war in Syria started in March 2011. Father Frans had by then been living and working for 48 years in Syria – as a psychotherapist, a retreat leader, pastor and founder of Al Ard, an organisation that cares for those with mental disabilities and provides one of the rare spaces where the three Abrahamic religions can come together and pray. He was considered a kind of holy puzzle by many Syrians: a Dutchman who learned to love Syria perhaps more than they themselves.

Many are the reports that speak of his care for the Syrian people, or of how after many years he had learned to think of himself as belonging to Syria, or of his refusal to leave the people of Homs and flee to safety. It’s this loyalty that led The New York Times to report that the attack that killed him ‘carried a heavy symbolic importance.’ It continues:

Individual deaths are often lost sight of in a war that has claimed more than 150,000 lives, and opponents of the government have sometimes complained that the plights of foreigners or members of religious minorities in the country get more attention than those of other Syrians. Indiscriminate government bombing kills people daily in the northern city of Aleppo and other places around the country. Nearly every Syrian family seems to include someone who has been killed, wounded, kidnapped or detained. Still, the killing of Father Frans struck a chord, because he chose voluntarily to share the plight of the people who stayed in the Old City.

When he died Father Frans had been a Jesuit for 55 years and a priest for 43. He was killed on April 7. April 10 would have been his birthday. He would have been 76 years old.

Tony’s next words: ‘Frans was famous – for 40 years he did this—he was famous for his maseer, his “march.” This was a kind of eight-day walk, a mini-retreat-pilgrimage, that he would do each year.

Tony is an animated speaker, hands in motion, eyes bright, gestures forceful – characteristics I have been known to use in teasing imitations of him that make him laugh. Tony turned 29 years old on March 18, the third anniversary of the start of the war in Syria. ‘I never went on the full eight days with Frans,’ he says, ‘although he is the one who gave the final approval that I should join the novitiate—that I am a Jesuit now. The most I did was three days with him.’

‘At the end of those days we walked to a tiny ice cream shop, all of us, Christians and Muslims.’ A pause.

And then, ‘My brother novices and I, we loved him and we would tease one another, joke about him doing Zen retreats instead of Ignatian retreats, how the people know Father Frans instead of Jesus.

‘But he was faithful, I see it now. He was passionate about life, love and not fearing death. Full of joy. I see Christ clearly in him now. In deeds more than in words. And he did it very simply. Just living in simplicity with people, putting aside his years of study, not being their therapist—their Ph.D.—but their brother, their pastor; just another Syrian with we Syrians.’

On April 8, in Rome, Vatican spokesman Federico Lombardi SJ, praised Father Frans as ‘a man of peace who showed great courage in remaining loyal to the Syrian people despite an extremely risky and difficult situation.

‘In this moment of great pain,’ he said, ‘we also express our great pride and gratitude at having had a brother who was so close to the suffering.’

The morning after Father Frans’s death, in Omaha, I speak with Tony again: ‘Yesterday I saw a picture of Frans’s body,’ he says. I do not know what to say.

I had needed time to think, pray. I needed to get something to write down the stuff he was saying. I’d asked him to come have coffee in the morning; we would talk. He has.

‘In Homs there are two Jesuit buildings,’ he says, ‘the residence, where we live, and a building that’s like a parish centre, a place where we teach and have a chapel. They are maybe five minutes apart by bicycle, and there are two Jesuits who live in the parish centre outside the blockade. Just Frans lived inside. Almost nothing passes in and out of the besieged area of Homs these days.’

I finish typing his words. Take a sip of coffee.

‘For the last two years—they live five minutes apart—they have not seen each other in person, only in pictures. And then he is killed. And not even his body can pass the blockade. Still they only meet in pictures.’

‘My assignment next year, if the siege ends,’ Tony says, his shoulders and eyes pointed at the floor, ‘will be to live in Homs. If the siege ends we will go back to our house. I might live in his room next year. Who is worthy to live in the room of a martyr?’

There are only nine Jesuits in Syria now. The same number of Jesuits who live on the floor with Tony and me here in Omaha.

There are 22 million Syrians, and just as many opinions about why Father Frans was killed, what it means, who is responsible.

It is one of the puzzling things about him, apparently. He seems to have crossed too many lines and been too widely beloved at the same time. A rare thing in Syria today where it seems that everything one says places one in a category. You like so and so? Oh, you support the rebels. You do this and that? Oh, you support the regime. But not Father Frans. He, it seems, gave Syrians at least one place of unity.

After Mass, our conversation, dinner yesterday I went to my room and thought again about Father Frans. I list the interrogatives: who, what, when, where, why.

I say as much to Tony in the morning, and he cuts me off. ‘We ask these questions—I ask them, too—we ask them because we want justice, revenge.’ He is emphatic now, fingers punching the air. ‘But this will just kill Frans again. Punishing these ones who did it… Frans could have been killed anytime these last months by a bomb, by assassination, by starvation. But he stayed. He was living his mission to be with the people, all of them. For or against the regime, Christian or Muslim.

I nod, at first slowly, then faster as my agreement picks up steam. Yes.

I do not know what martyrdom means, or death. Talking with Tony, praying about the death of this single man among the 150,000 who have died since 2011, sitting alone thinking – more ways of tolling the bell of incomprehension. And this would be a haunting thing, a howling, caustic ghost of a thing, if I were not a Christian.

This might be what I like most about believing in Jesus: the ability to not have to know. To not have to drape the white sheet of language over its emptiness. To not have to rope this event to reason in order to pull it, hand over hand, back from beyond the cliff of rationality where it hangs. To not have to be the one who gives meaning to the fact that an old man, one who liked ice cream and Zen and hiking retreats with Mass and reflections, was shot in the head three days before he turned 76. It is not a Christian’s job.

We human beings are not the ones who get to make this death meaningful. God is the one who breathes life, calls us from the grave, makes any death – even a martyrdom, even this one, even if it becomes the catalyst for peace in Syria – meaningful.

Which does not make our remembering, or our actions in memory of, or the action of remembering, mean nothing. Not in the least. Instead it puts us, like St. Peter, in our place. In the deep waters, casting our nets into the wide sea, knowing that we are not the ones who place the fish.

This article is published in the 2 May 2014 issue of America magazine.  Reproduced with permission.

Finding God in South Sudan and the USA

Social Networks and the Arab Spring