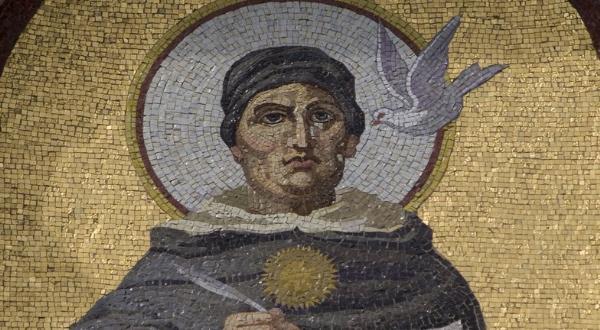 28 January is the Feast of the great Doctor of the Church, St Thomas Aquinas. But why does the theology of this Dominican priest who died in 1274 still carry so much influence today?  Renowned Aquinas scholar, Fergus Kerr OP explains why there has been a turn back to Thomism in recent years, and gives just a few reasons why we are still reading Thomas Aquinas.

You could graduate today with first-class honours in divinity in most British universities knowing next to nothing about Thomas Aquinas. On the other hand, fifty years ago, in Catholic colleges and seminaries, you might have heard of no one else: an even worse state of affairs, you might think!

There was always more of interest in Aquinas than just his apologetics and natural law ethics.  The narrow picture of his work that suggests otherwise derives from the textbooks simplifying Aquinas’s ideas that the authorities in the Catholic Church imposed on seminarians, from the 1870s, as the hoped-for antidote to the subversion of the student clergyman’s faith by the allurements of ‘modern thought’ (Protestant private judgment, fideism, Cartesian consciousness, German idealism, Marxism etc.).

This kind of Thomism was already being challenged in Catholic circles in the 1920s by what would come to be called Transcendental Thomism: Jesuits like Joseph Maréchal and Pierre Rousselot.   Enthusiasm for Aquinas shown by lay philosophers such as Etienne Gilson and Jacques Maritain helped to renew Catholic thinking about metaphysics, aesthetics and political theory in advance (as it turned out) of the Second Vatican Council.[1]

One result of the reorientation of Catholic theology after the Second Vatican Council, however, was the disappearance of Thomist apologetics and natural law ethics:  the new emphasis on biblical and early-Christian studies, existentialism and phenomenology in philosophy, the social sciences, and so on, eclipsed Aquinas.   Now, however, due especially to North American scholars, but with antecedents in the work of lay Catholics before the Council, there is a remarkable return to the thought of Aquinas, at least in some areas.

Building on scholarly research on the historical context, David Burrell shows that, instead of his focus lying mainly in demonstrating God’s existence as in pre-Vatican II apologetics, Aquinas has a phased or layered conception of the One God. God as source and goal of all that exists, the God of whose reality knowledge was attained by the pre-Christian philosophers – literally ‘wisdom-lovers’ and effectively themselves religious; secondly, that same God self-revealed as the Lord whom the people of the Law of Moses were commanded to obey; and thirdly, the very same God, of whom knowledge has been communicated by Christ to the Apostles and thus to Christian believers: God as Trinity.[2]

This takes for granted a certain reading of ancient Greek philosophy as itself religious and virtually theological.  Moreover, centuries before Aquinas, Jewish philosophers such as Philo of Alexandria (c.20BC-c.50AD) envisaged God as the metaphysical first principle of the universe: perfectly simple, unchangeable, and so on.   Aquinas’s One God may be approached, that is to say, not as the first step towards ‘the God of the philosophers’, oblivious to Scripture, but as a late moment in the long tradition of considering the God of the Septuagint in the light of a Platonising metaphysics that dates back at least to Philo. In short, in the context of interaction with Jewish and Muslim thinkers, David Burrell shows how Aquinas fashioned his doctrine of God and of creation by drawing on the work of Ibn Sina (980-1037) and Rabbi Moses ben Maimon (1135-1204), retracing the immense effort of conceptual clarification in the three traditions, Judaism, Christianity and Islam, as it comes together in the Middle Ages. Burrell offers not mere historical scholarship but an invitation to rethink the doctrine of God as such, in what we might, somewhat anachronistically, call an ‘ecumenical’ and ‘inter-religious’ way.

A second way of learning from Aquinas was inaugurated by the lay Catholics Elizabeth Anscombe, in her Intention, in which she demythologises modern notions of will[3]; and Peter Geach (her husband), who did the same for notions of mental states in his Mental Acts, in which he was openly contemptuous of ‘decadent Scholasticism’ and the work of ‘many of [Aquinas’s] professed followers’.[4]

The assumption in mainstream philosophy since the seventeenth century has been that there were – are – two major centres of interest: first, the ‘Cartesian’ conception of the self, with direct access by means of introspection to our interiority and thus tending towards solipsism; and second, if we are to have knowledge, the need to posit intervening entities of some kind - mental images, sense data or whatever - that stand between our minds and the objects that exist in ‘the external world’, thus laying us open to the charge that we have no direct knowledge of the world around us.  In contrast, Aquinas thinks of the objects in the world as potentially intelligible and becoming so as our intellectual potentialities are realised, so there is nothing intervening between the mind and the world (neatly put in Latin: intellectus in actu est intelligibile in actu).   While it would be exaggeration to claim that this turn to Aquinas is transforming current debates about the relationship between mind and world, there is at least this plausible third position on the table between out-and-out Cartesian mind/body dualism, and the much commoner and indeed dominant physicalist/materialist brain/mind identity theories.   Under the heading of Analytical Thomism, this position has been labelled the ‘mind-world identity theory’ by John Haldane: of course we can often be mistaken or misled but most of the time how the world seems to us is how the world really is.[5]

Thirdly, consider the advance of ‘virtue ethics’, increasingly engaged with Aquinas.   The key intervention originally was Anscombe’s attack on modern moral philosophy in 1958.[6]    Back then, when moral philosophers were split between utilitarianism and Kantian duty for duty’s sake, Anscombe dismissed the former as barely worthy of being called moral philosophy at all, and concentrated on exposing the latter as continuing surreptitiously to feed off reverence for divine command ethics as promulgated in Scripture. Now that belief in divine law has been largely abandoned, so she contended, concern with such notions as duty, obligation and the like, had become senseless.  While Protestants at the time of the Reformation did not deny the existence of divine law, their most characteristic doctrine was that the law was given by God, not to be obeyed, but to show sinful humankind’s incapacity to obey it, even by grace: this applied particularly to the requirements of ‘natural law’. Anscombe’s proposal in her groundbreaking essay was that the best course was to abandon any further attempt to make sense of duty or obligation, and to return instead to Plato and Aristotle. Should we do this, we would then find that ‘philosophically there is a huge gap, at present unfillable as far as we are concerned’ – a gap which needs to be filled, she proposed, by ‘an account of human nature, human action, the type of characteristic a virtue is, and above all of human “flourishing”’.

While not explicitly mentioning Aquinas, Anscombe’s provocative sally signalled the return to Aristotle (rather than Plato, as it turned out) and the massive expansion of interest in ‘virtue ethics’, particularly since the work of Alasdair MacIntyre, who recognised her essay as the catalyst.[7]     Instead of treating the happiest outcome for the greatest number of people as the criterion for the right course of action to follow, or alternatively submitting to the imperative call of duty, we should focus on describing the virtues that go to making the kind of people whose character would invite us to trust and consult them.

On the other hand, we need not write off natural theology. One of the major achievements in recent Anglo-American philosophical theology is the reading of Thomas’s Summa contra Gentiles that is offered by Norman Kretzmann.[8]  In that book, we have not just a monumental achievement of medieval philosophy, but a vast thought experiment that should be studied on its own, for itself (and so independently of the Summa Theologiae): a great work of philosophy that offers the best available natural theology in existence. Kretzmann holds that, prescinding from appeals to divine revelation as evidence and justification, it remains possible, desirable, indeed inescapable, for us to investigate by means of analysis and argument, the question of the existence and nature of God and the relation of everything else to God considered as reality’s first principle.  For  Kretzmann, there is nothing misguided in reasoning about God: on the contrary, it is now, as it was before the birth of Christianity, and quite independently of personal religious allegiances, a worthwhile and enjoyable intellectual endeavour.

There is a good deal else one could mention but these are some of the debates in which appealing to Thomas Aquinas seems worthwhile.

Fergus Kerr OP is a Dominican priest based in Edinburgh. He is the Editor of New Blackfriars, and the author of Theology after Wittgenstein (1986) and After Aquinas: Versions of Thomism (2002).