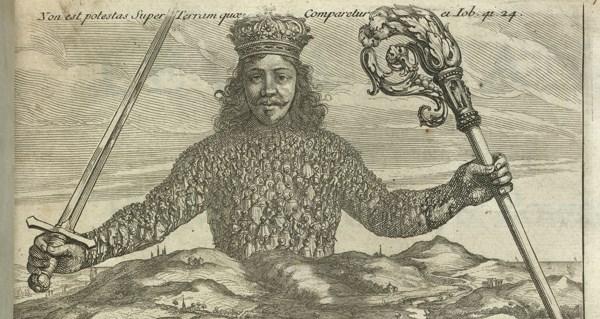 Theresa May has warned of ‘paralysis in Parliament’ in the event of her Brexit deal being rejected by the House of Commons on Tuesday 15 January, and called on the MPs who will be voting to support the deal ‘for the country’s sake’. But what does it mean for parliament to do what is for the good of the whole country? Patrick Riordan SJ draws on the philosophies of Jean-Jacques Rousseau and Thomas Hobbes to help us think about how the Will of the People can be discovered and acted upon in any situation.

The year 2019 promises to provide political fireworks to match those of recent years. We are likely to be caught up in debates on various issues, debates in which ‘sovereignty’ and ‘representation’ are key terms that will be used and possibly abused. So it might be useful to reflect on what justifiably can be said using these concepts. A good place to start is with the French 18th century philosopher, Jean-Jacques Rousseau (1712-1778).

Rousseau, one of the towering pillars of civic republicanism, has had a bad press from the liberal political tradition in Britain. This is largely because he has been misrepresented as saying that people should be ‘forced to be free’. A careful reading of his argument reveals a different position. His point is that individuals who wish to be free, and who recognise that they cannot be free as long as they are subject to and therefore dependent on rulers, could only achieve their desired freedom if they combined to form a ‘People’, united in pursuing what is for the good of the whole. The great threat to such a unified People is – as Plato recognised in the Republic – that sectional or particular interests dominate citizens’ consciousness and override concern for the common interest. The end result of that dynamic would be a loss of the hoped-for freedom and subjection to the particular interests of the most powerful section of society. Anyone who saw the danger to freedom posed by the temptation to pursue a private gain would ask her neighbours to help her keep on the straight and narrow. Rather than risk the loss of freedom, citizens would ask for the support of coercive measures.

The desire for freedom from any form of domination is frequently misunderstood. This is the context for the republican rhetoric of the ‘Will of the People’, which supposedly intends the common interest as opposed to any particular interests of a section of society. The will of particular lobbyists competes with the Will of the People and so jeopardises freedom. Despite his enthusiasm for his argument, Rousseau is unable to provide a clear answer to the question: how do you know what is the ‘General Will’, the Will of the People, as distinct from a particular will? Far from a majority in an election providing warrant for determining the General Will, not even total consensus, 100% agreement in a full turnout, would guarantee it for Rousseau. The will of all is not the same as the Will of the People, because, as he sees it, the electorate are in danger of being misled and misinformed by leaders who mistake a particular interest for the general interest.

The commentators who read the choice of 52% of those who voted in the EU referendum as the Will of the People adopted Rousseau’s rhetoric without attending to his fuller theory, which could have allowed suspicion of an even greater or overwhelming majority. But there are also other incongruities. Rousseau insisted that the People, pursuing its own General Will, is Sovereign. He uses the term in the sense established by Aristotle: sovereignty is the highest authority in a polity. The People is Sovereign in giving itself the law, expressing its General Will. But this sovereignty, being a matter of will, cannot be represented or delegated. No parliament of elected representatives could be sovereign, according to this account of sovereignty. Representative democracy was unacceptable to Rousseau. The only kind of democracy he could accept was direct democracy, but that, requiring participation of all citizens in deliberation and decision-making, could only work with a very small state and only as long at the issues remained relatively uncomplicated. The common assumption that republicans who speak of the Will of the People are democrats is shown to be mistaken. Rousseau even wrote the following in explanation of his commitment to this republican ideal of the People as Sovereign, and government agencies as instruments of the People:

I therefore give the name ‘Republic’ to every State that is governed by laws, no matter what the form of its administration may be: for only in such a case does the public interest govern, and the res publica rank as a reality. Every legitimate government is republican. [Footnote: I understand by this word, not merely an aristocracy or a democracy, but generally any government directed by the general will, which is the law. To be legitimate, the government must be, not one with the Sovereign, but its minister. In such a case even a monarchy is a Republic][i]

Rousseau had read the works of the great 17th century English philosopher of politics, Thomas Hobbes (1588-1679), for whom these terms of representation and sovereignty are equally central. Despite some surprising similarities between the two thinkers, they take contrasting positions. For Hobbes, the Sovereign is the Representative of all the members who, by covenanting with one another, form a single society under government. Hobbes elaborates on the notion of representation. The Sovereign – which may be an individual such as a monarch, or an assembly such as a parliament – is understood to act with the combined force and authority of all who have submitted to it. The frontispiece of the first edition of his book, Leviathan, carried an illustration to convey the central idea:[ii] the body of the Sovereign, in this case depicted as a monarch, is composed of the myriad individual persons in the commonwealth. The Sovereign as highest authority carries the symbols of both civil and ecclesiastical power. And so it is in representing in the public space all of its subjects that it is possible for the Sovereign to be present and act. In fact, on Hobbes’s account, this is the only way in which the Sovereign can be politically significant: there is no other way to escape the chaos resulting from everyone looking out for himself. Hobbes also insists that this meaning of representation is not to be interpreted as entitling any individual or group to object to the Sovereign for failing to represent them in the sense of advancing their particular interests. Whatever legitimate interests they may have are the ones allowed to them by the Sovereign.

Hobbes is certainly not the only or the principal influence on British political institutions, but his understanding of the Sovereign as the Representative of the people is compatible with the evolved comprehension of the UK’s Parliament. Edmund Burke (1729-1797), elected to the House of Commons for Bristol in 1774, explained to his constituents that he owed them his hard work and his judgment of what was in their best interest: ‘Your representative owes you, not his industry only, but his judgment; and he betrays you, instead of serving you, if he sacrifices it to your opinion.’[iii] The MP is not a delegate, or a messenger, sent to communicate the will of his constituents, but someone charged to exercise judgment along with others concerning the good order of society and the best interests of its members. To form judgments based on reasons is the task of the legislator and the legislative assembly.

Even with this understanding of the role of the politician in the sovereign assembly, there is a tension with the practice of voting. It is not the stronger reasons that carry the day in a vote in parliament, but the greater number. May one still speak of judgment based on reason when the parliamentary arithmetic is so critical? The judgment supported by the majority is the successful one, whatever the reasons in its favour. In the absence of consensus there has to be some way of making a decision, and voting is one way of doing so. This is what can be said in support of the practice: majority rule is a means of reaching a conclusion in the context of persistent disagreement. It is wise to recognise this very practical context for these central institutions of elections and parliamentary votes in our current form of government. Instead of mystifying what takes place with the rhetoric of the Will of the People it would be preferable to recognise the practical contingency of having to take a decision in the absence of consensus. If there were consensus, there would be no need to take a vote. The current situation is that neither major party is able or willing to resolve internal differences with a vote, and the parliament as a whole seems equally hamstrung. This is a dangerous state of affairs for our political institutions and it requires each Member of Parliament, each representative, to exercise judgment for the good of the whole. This concern for the overall good, is at the heart of both Rousseau’s promotion of the General Will, and Hobbes’s understanding of Representation, despite their very contrasting theories.

Patrick Riordan SJ is a tutor and fellow in Political Philosophy and Catholic Social Thought at Campion Hall, University of Oxford.

Reform, Morality and the Coalition