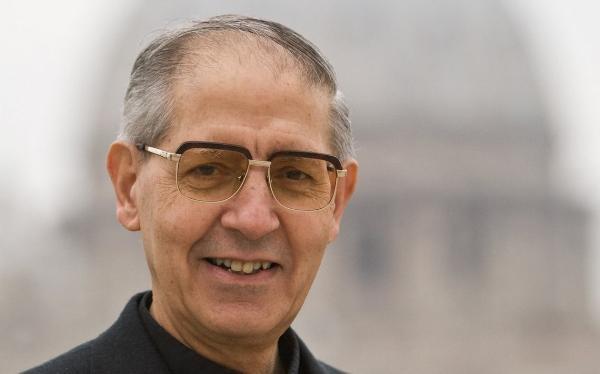 In an exclusive interview given recently to the editors of Jesuit journals, Father Adolfo Nicolás, the new Superior General of the Society of Jesus, is questioned about the challenges now facing the Church, the Society and him personally. In this first of three parts, Fr Nicolás talks of his surprise at his election, the change of perspective this has brought about in him, and his desire – and the Church’s call – for the Society to be both loyal and creative.

A new period in your life has just started. You are now the General of the Society of Jesus. What’s your hope? What do you expect from Jesuits?

What is my hope?  Now, at the very beginning, I fully realise how much I don’t know: how things work, what all the relationships are, many other things, and so my hope is that I can grow into the job. Basically this means growing into this service: how can I best serve the Society and serve the apostolates Jesuits are involved in?  That is what I hope for myself. I don’t think I can define more than that at this stage.

What I do expect from the Jesuits?  If I try to put things into one idea or one phrase, I would say I really hope that we insert ourselves deeply into what we do – be it pastoral work, education, research, spirituality – not in terms of success or in terms of exterior factors. Whatever issue we take, even those questions that sometimes people feel so awkward about (like relationships with the local hierarchy), if we can go deep enough into it, we can find so many possibilities for cooperation, for helping people, because in the deepest parts of ourselves we encounter the Lord who inspires our best service of others. Asking Jesuits to go deep into the issues and deep into discernment on what the possibilities are and how we can serve better, that will be my key and central part.

Since you were elected as a general you have met the Pope twice. The first time was during a private audience; the second time you were received by the Pope with all the members of the Congregation which elected you. Then, in reference to his predecessors, the Pope affirmed that the Church needed the Society, counted on the Society that you are leading now. What did that arouse in you?

I have to confess that these past two months have produced a change within me. I think I have come to a much more vibrant and personal relationship with the Holy Father and all he represents.

This tradition and the way it has been renewed makes it very clear that the term ‘black pope’ has no meaning. This expression is one of those popular things that goes around but has absolutely no foundation in truth. The Superior General of the Society of Jesus is not the head of some organization parallel to the Church; he is the leader of a group that exists to serve the Church.  If we want to identify our place in the Church, the best expression is Ignatius’s expression that we are “the least Society,” just one group among many others who are trying to serve the Lord’s people, no more. The Church can do without the Jesuits, but the Jesuits cannot function without the Church.

I think this change in me, the change of approach or perspective, situates me in an authentically peaceful relationship with the Church. I don’t think that loyalty to the Church or the hierarchy or cooperation or affection in our relationship with the Pope have ever hindered the Society in any way from being creative, from being daring, from being dynamic and from thinking freely. So, why should it now?  Only when we narrow our concepts into unhelpful, rigid channels do we limit our ways of serving the Lord. But again, let us go deeply into the issue. In this case it means that we want to continue to be universal and to be related to the whole Church. Being closely related to the universal Church means being closely related to the Pope, whom St. Ignatius believed was in the best place to know the needs of the universal Church.  So, for me the experience of this General Congregation regarding our relationship with the Holy See has been the recovery of something that belongs to the heart of our tradition.

The Pope himself referred to Jesuits at the utmost of their creativity – De Nobili, Ricci and the reductions in South America.

Don’t you think that the creativity of the Jesuits in the Church is not very well perceived by some people?

Many people have a wrong idea of obedience. They think obedience is giving up the talents you have received, giving up thinking and being creative, giving things up for the sake of becoming some kind of slave or robot carrying out somebody else’s thinking.  This is not an authentic way to be human; this could never be obedience. Another thing is that people think safety lies in not creating, but that is simply an expression of lack of imagination. I think an apostle, a pastor, a parish priest, a teacher, an educator without imagination and creativity would be a disaster. He would just try to impose on everybody one, limited, constricted, rigid approach, and that would be very bad for everyone.

What was your experience of GC 35? What have you received from it beyond the decrees?

Obviously the first thing was the surprise of the election. That was totally different from any other experience I’ve ever had!  From a position of reflecting about things, even being committed to things, but more in a reflecting mood, I came to be part of a process in which you see people searching with such honesty and simplicity, and all really totally concentrated on thinking about what is good for serving the kingdom of God, for serving the Church, for building up the Society of Jesus. That changed me. At the start I was sure the election of the new general would have nothing to do with me. I thought, if by any chance my name would come up I would convince people that I was a wrong choice.  I even considered not accepting for the good of the Society. But then I came to a point of realising the process is so prayerful, and the search that went on was so genuine that you just cannot say no. You have to be obedient to the Spirit speaking through the community.  It’s a community event of being obedient to the Holy Spirit speaking through the community.  This has been a very important experience for me, and it has changed me without any effort on my part.

Another big experience of this Congregation was the tremendous experience of mutuality in spite of the great diversity. It was the most diverse General Congregation we have ever had. In the last one there were still many superiors who were Europeans working in Africa, Asia or Latin America. Now we had much more variety and much more representation of people who grew up in the local Church where they now serve. But in spite of this diversity the feeling of being one has been very strong. For instance, the Indians, who were the biggest single group, never acted together as a bloc; they were all individuals, and they did it on purpose. One of them said, “We came here to serve the universal Church, the universal Society, we have no positions as a bloc”. They really have been extremely faithful to that. It applies also to others. We’ve seen variety among the Africans, among the Indians, among the Asians, among the Americans, among the Europeans; there were no cliques, no parties, no special interest groups. This is a very extraordinary point.

This was not the first time you have attended a General Congregation.  What was particular about GC35?

Compared with the past Congregation, GC 34 the only other one that I know first hand. A peaceful reaffirmation of our position in the Church has been something very unique in this Congregation. In the past maybe because of our history there were more tensions, more visible ones. This time in spite of people still bringing hurts in from past difficulties there was a willingness to reaffirm our position in the Church, in our relationship to the Holy Father, without reducing our mission, without becoming servile, without giving up what we think God wants from us as a group that tries to help the Church to be creative and open and responding to new challenges. I think this has been something particular of this Congregation.

I think so, and very much. I have felt the support of the Congregation very strongly. I never felt in the past two months: “Okay, people have given me this task, say ‘do your best’ and go back home.” On the contrary I have felt I have ongoing support and affirmation from many, in many different ways. Personally I felt people very close. Also institutionally they have given me really good men as general counsellors.  I have seen a willingness from the Assistancies (groupings of Jesuit Provinces) to give me really the best men they have. So I’m very confident that even if I make mistakes there will be people around who will prevent me from making too many mistakes — and that’s a great help. I feel I can count on all the 225 members of the General Congregation for the future, and these people are important for the work of the Society. Therefore I feel much more confident today than on 20th January, the day after I was elected.

This is the first part of an interview with Fr Nicolás conducted by Tomasz Kot SJ and Jan Koenot SJ in Rome  on 7 March 2008, two days after the end of the General Congregation.  The questions were prepared by editors of European Jesuit journals: Carlo Casalone SJ (Aggiornamenti Sociali), Jan Koenot SJ (Streven), Tomasz Kot SJ (Przegląd Powszechny) and Albert Longchamp SJ (Choisir).

Read Part Two of this interview

Read Part Three of this interview

The New Jesuit General Part Two: 'Has spirituality been replaced by ideology?'

The New Jesuit General Part Three:  'Is there too much diversity in the Society, or in the Church?'