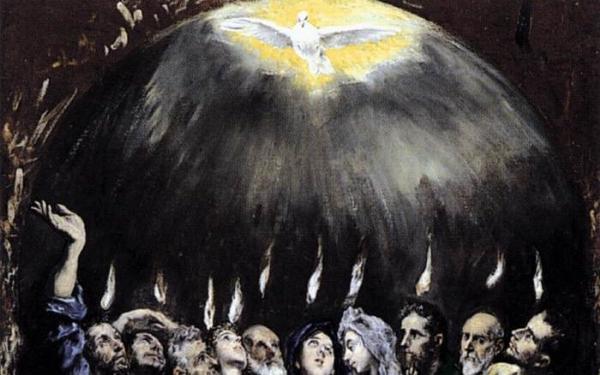 What does the account of the ‘descent of the Spirit’ in the Acts of the Apostles tell us about the place of the paschal mystery in the life of the Church? In part two of a study of the feast of Pentecost, Nicholas Lash explains that we cannot comprehend the sending of the Holy Spirit without recognising how it relates to the Easter event.

The Spirit of Easter

The principal doctrinal development of the [Second] Vatican Council’s Constitution on the Liturgy was the re-establishment, at the centre of Christian life and worship, of the paschal mystery.[1] The event that redeemed the world is the redemptive incarnation of the Word of God. But that event is only complete in his establishment in glory at his Father’s side. In the days of his flesh, Jesus was still at some ‘distance’ from his Father. Although he personally knew no sin, he became part of an alienated humanity, mankind isolated by sin from the glory of God: ‘for our sake he made him to be sin who knew no sin’.[2] The culmination of the incarnation is the conquering of death and sin, the ‘closing of the gap’ between God and man, in the passage of Christ through death to glory. Only in the ascension is the incarnation complete, because only then is the humanity of Christ filled with the Spirit of God.

But this establishment of Christ in glory only brings about our redemption in so far as it makes possible our incorporation into the risen Christ. The purpose of the paschal mystery, as the realization of God’s glory in the humanity of Christ himself, is to establish him as source of the Spirit to bring about the same process of recreation, renewal, divinization in us,[3] the members of Christ. In the days of his flesh, Jesus could arouse a response in his hearers which was already supernatural because it was the free response of man to the freely given Word of God. But the dwelling of God amongst his people is only complete when he dwells amongst them, not as a man among men, but as the very principle of their thinking and their loving: when he dwells in them through the gift of the Spirit.[4] In the days of his flesh Jesus promised the Spirit, but ‘as yet the Spirit had not been given, because Jesus was not yet glorified’.[5]

Our redemption, as a reality transforming us personally, is dependent on the glorification of the Son of Man. Only when one of us (our head) who, like us, was ‘far from God’, has become fully with God (Emmanuel), can he bring us close (redeem us, recreate us) in the Spirit. That is why ‘without the resurrection and its consequent glorification, in which the Father establishes Christ in his humanity as a principle of the Holy Spirit, we would not be redeemed’.[6]

Now we see why it is that the sending of the Spirit is essentially a part of the Easter event.[7]

Included in the resurrection, as the eternally-enduring saving status of Christ, there is also the ascension, his establishment as Lord, and the sending of the Spirit which is Christ’s exercise of actual lordship. Essentially, all this together forms the one and only enduring mystery of salvation: the very person of the glorified man Jesus as the reality of salvation.[8]

This aspect of the Pentecostal mystery, as a continuing reality, is clear from the innumerable occasions in the letters of St Paul, and in the prayers of the liturgy, in which we pray for the ‘coming’ of the Holy Spirit. It is also clear from the number of occasions, other than the day of Pentecost itself, on which the ‘descent of the holy Spirit’ is recounted in Acts.[10] Moreover, it should not be overlooked that St John, whose theology shows such a strong sense of the unity of the paschal mystery, records the first ‘sending of the Spirit’ as taking place on Easter day itself.[11] We can, therefore, agree that ‘ . . . there is something arbitrary in the promotion of the fiftieth day after Easter to the feast of Pentecost as the sending forth of the Holy Spirit. This is obviously a case of thematic presentation (based on historical fact), and in the present instance also in connection with the Jewish Pentecost’.[12]

We are now in a position to examine more closely St Luke’s account, in the second chapter of Acts, of that outstanding ‘descent of the Spirit’ that took place on the feast of Pentecost and to discover, in more detail, the significance of this event for our understanding of the paschal mystery in the life of the Church.

The eschatological outpouring of the Spirit

Throughout the Old Testament, the image of the breath of God (spirit, wind) had been a primary image for describing the creative activity of God,[13] his inspiration of those who were to bring his word to his people[14] his sovereign guidance of the Messiah,[15] his gathering of the messianic people. It is this last point on which Luke concentrates: the creation of the messianic people of God in the power of the Spirit is a sign of the ‘last days’.[16] The Church, the community called by God, is a community in which each member has been renewed by the Spirit. The covenant finds its fulfillment here, for the law, which structured the community, has now become an interior reality in the hearts of God’s faithful people.[17] The people thus created and united by the Spirit are a joyful brotherhood who meet together to hear the teaching of the apostles and to break bread.[18]

A community of witness

As the witnesses to God in the Old Testament had been inspired by the Spirit, so Jesus had promised that the apostolic community’s witness would be grounded in, and assured by, the gift of the Spirit.[19] It is important to insist that all office in the Church is a gift of the Spirit,[20] and that the Spirit is not bound by the confines of office.[21] Apart from the fact that some of the more startling charismatic gifts are no longer common, the characteristics that Luke notes of the new people of God remain the essential features of the Church. ‘Certainly, there is a difference between the suddenness of the renewing change in the apostles, from the way they were before Pentecost to the way they were afterwards, and the change in our own Christian lives which are renewed by the Spirit only silently, unobservedly and gradually. But still, the difference is also due, partly, to our own lack of sprightly faith in the power of the Spirit’.[22]

So far as Luke’s account of the miracle of tongues is concerned, it seems probable that, as so often in the bible, two originally independent accounts of the incident have been merged. The first [23] would see the gift of tongues as ecstatic (and therefore unintelligible) ‘speaking with tongues’, the sign of men completely taken over by the Spirit.[24] The second[25] would see in the fact that the new community speaks in the accents of all men a sign that the destruction of human community through sin[26]has been healed. Both ideas are important if we are to capture the full significance of Peter’s sermon, but the second, in particular, stresses the universality of the new community in the Spirit.

The fulfilment of the paschal mystery

The theme of the second part of Peter’s sermon is that this eschatological outpouring of the Spirit can only be understood in relation to the glorification of Jesus Christ.[27] We have already discussed this aspect of the mystery of Pentecost in sufficient detail.

The paschal mystery, the achievement of the covenant-relationship of mutual life, knowledge and love between God and his people, realized in the person of Christ at Easter, is made a permanent dimension of human history ‘in these last times’ through the continual sending of the Spirit. There now exists a community, drawn from ‘every nation, from all tribes and peoples and tongues’[28] whose members have been called by God to new life ‘through water and the Spirit’, whose functionaries have been sent by Christ in the Spirit to continue the apostolic ministry, whose duty it is to witness to the resurrection of Jesus ‘to the end of the earth’,[29] whose role in history is that of ‘sacrament of intimate union with God and of unity for the whole human race’,[30] whose principle of life is the Spirit of Easter, who, ‘by the power of the gospel.., gives the Church youth and continual renewal, and brings her safe to the consummation of union with her bridegroom. For the Spirit and the bride say to the Lord Jesus: Come’.[31]

We said earlier that the principal doctrinal achievement of the Constitution on the Liturgy was the re-establishment, at the centre of Christian life and worship, of the paschal mystery. Another, almost equally important point of doctrinal emphasis is the stress on the manifold presence of the risen Christ in the priestly people.[32] But to say ‘presence of the risen Christ’ is to say ‘grace’, or ‘presence in the Spirit’. If we combine these two factors, we see that the constitution is expressing the rediscovery in the Church of the perspective that dominated the early Christian consciousness; a perspective that we described earlier as a vivid awareness of our incorporation here-and-now into the paschal mystery.’

The contemplation of these elements – the death of the Lord, his resurrection, glorification, and the sending of the Spirit – must not distract us from a clearer vision of the whole. The celebration of the liturgy is never a simple matter of keeping an anniversary; it is always our joyful encounter, in the Spirit, across the sacramental signs, with the risen Lord of history, through whom we give to God, the almighty Father, in the unity of the holy Spirit, all honour and glory.[33]

[1]Cf arts. 5, 6, 10, 47, 81. Among the many excellent works on the paschal mystery that have appeared in recent years, mention should be made of an outstanding collection of essays in liturgical theology in La Maison-Dieu 67-68 (1961).

[3]The eastern Church, in particular, has never been frightened of thus describing our transformation by grace: dearly the term needs using with discretion.

[17]Jer 31:33; Ezek 36:24-28. In regard to these texts, cf remarks above about the later rabbinic interpretation of the Jewish Pentecost as a covenant-feast.

Read Part One of The Pentecostal Spirit