Skip to main content
Photo by Macropixel?s at flickr.com 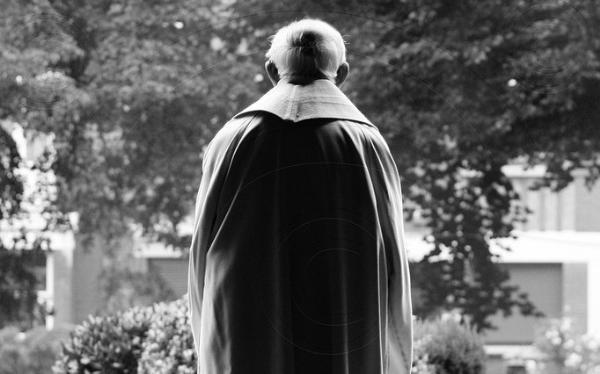 ‘In the daily rhythm of receiving and being given, the priest allows himself to be shaped by the ebb and flow of grace, alive in the rhythm of the Spirit breathing in him.’ As part of Thinking Faith’s series to mark the ‘Year of the Priest’, James Hanvey SJ describes how the life of a priest is shaped by the relationships to which he is committed, yet is characterised always by the mysterious surrender of himself to the life of the Church.

When things are in transition and the old certainties, languages and systems seem to be dissolving, the question of identity becomes a recurring anxiety.  Although the sacrament of priesthood confers its own immutable character, identity is always worked out in a context, in a community, in relationships.  As these change then so will the experience of ministry and its range.  In this situation identity will appear unstable and meaning difficult to establish with confidence.  Yet, in an odd way the immutable character of the sacrament of priesthood commits the priest to these relationships in all their fluidity – relationships he does not choose but is given; relationships that he cannot simply shake off.

Even when such relationships are at their most painful, somehow they continue to shape and determine a life, a ministry, a way of being.  The sacrament does not remove the priest from the world, from the lives of the people he is called to serve, from the Church that walks the rough path of history, living with generosity and love in cultures that are hostile or simply uncomprehending.  Instead it commits him more completely and more insistently to live in all these realities.  Always in his life is the dynamic of the incarnation.  It carries him beyond himself into the depths of the world, the secret places of the human heart and the human dream and, of course, the brokenness of both.

He lives there, with his people, knowing the poverty of his own resources; the daily encounter with his fragility and the many things he does not know, the answers he does not have.  In these moments he can only trust to the future – not so much a time but a person whom he has come to know and love as his Lord.  He lives with the struggle, with the pull to withdraw – just a little – to take control and to measure out his energy, choose his paths and find his resting places.  He knows that he was not called for his strengths but for his weakness.  He knows that those consoling words of Paul, that God’s strength is perfected in his weakness, are not empty words.  But when he has to drink from the cup of weakness or eat the bread of his loneliness, when the drag of routine can almost hollow out any strong sense of identity that has life, it is not easy to live these things as a real grace, a real moment of meeting with the God who has called him.  But if he does not give in to fear, rush into activity or find some theology or spirituality that will offer comfort and security, if he can hand himself over to the faith the Church has in him and remain faithful to the sacrament at the centre of his life, something begins to disclose itself.  Slowly, over a lifetime, he does not discover an answer but an act, a way of being.  It is a way of being hidden.

Our culture makes us want to know who we are.  It commands us to ‘be ourselves’, to be the masters and makers of our lives; this is the ultimate freedom.  But the priest is not self-made; all he has, he has received.  This is the mystery at the centre of his life and in every moment he is ‘given’, handed over.  He remains an enigma to himself, a puzzle, because he can never be in command of the sacrament that has now claimed him; the One who has made his home in him.  All he can do is receive himself from the sacrament which is effective in every minute of his life whatever his situation or condition.

As a priest, his life moves in the very opposite direction of ‘sovereign self’.  In the very moment of receiving himself he can only let go, let himself be given.  Given in all those small and unnoticed ways; in the ordinariness of sacraments which he celebrates for God’s people, in the prayers he says, sometimes badly and distractedly; in all the lives he touches, sometimes absentmindedly, sometimes with love and insight and care; and in those hidden moments when someone opens their life to him in its pain and despair, its guilt and its shame, when somehow he finds a word or maybe no word, but his presence is an unacknowledged healing.  So, in all this daily rhythm of receiving and being given he allows himself to be shaped by the ebb and flow of grace, alive in the rhythm of the Spirit breathing in him.  He allows himself to be lost in the life of the Church.  He gives himself to the unsung gestures of love and he recognises that on some days, just on some days, he might understand a little of their beauty and their mystery.

Occasionally, if he’s attentive and faithful to the rhythms of this sacrament that has become his life, he might begin to glimpse a form, another life that moves within his own without which he would have no life. He might recognise the One in whose life his own lies immersed and hidden.  And when he comes each day to say those simple words, not his own words but the words he has been given, he knows he is in the school of love. ‘Take and receive…’ Not just words but an act; an act which he knows he can never fathom or exhaust.  Here, pronounced and performed, he is born to himself and to Christ and to his people. He will know the Life he carries; the joy, even in sacrifice and surrender, of being poured out and given away.  In these words which he is given to speak, his life has become a Eucharist; a ‘yes’ which he says yet knows is always beyond him, ‘Take and receive.’ Here, in this act, all the hidden surrenders gather into Love, into Christ, and he knows whose identity he carries.  He knows himself in living this life beyond his own.

Take Lord, and receive
All my liberty, my memory, my understanding,
and my entire will,
all I have and possess.  You have given all to me.
To you, Lord, I return it.
All is yours, dispose of it wholly according
to your will.
Give me your love and your grace, for this is
sufficient for me.

Fr James Hanvey SJ is Superior of the Jesuit Community at Farm Street, London and lecturer in Systematic Theology at Heythrop College, University of London.