Skip to main content
Photo by newbeatphoto at flickr.com 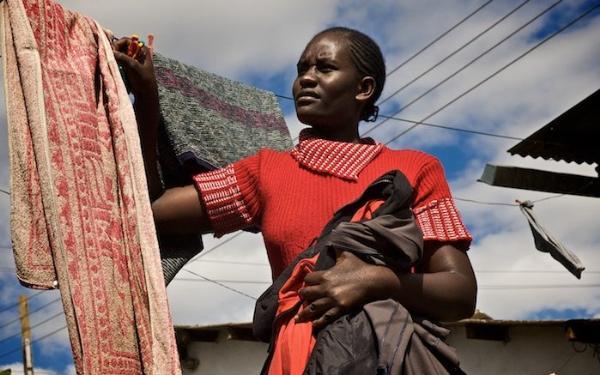 Michael Czerny SJ recounts the impression that Caritas in Veritate made on an HIV-positive mother in Nairobi, who has faced in her life many challenges to the ‘integral human development’ that the encyclical seeks to promote.  How can Pope Benedict’s letter help Rosanna, not only through her reading and understanding of it, but through ours too?

‘To all people of good will, on integral human development in charity and truth,’ the latest encyclical starts out. So what might Caritas in Veritate say to a poor woman with HIV in Africa? And can she in turn help a reader of Thinking Faith grasp what the Holy Father is saying?

When I read Caritas in Veritate, I thought of Rosanna, an abandoned mother in her twenties, HIV-positive, struggling to get by in a Nairobi slum. ‘Six years down the line,’ she says, ‘my family has not accepted me, not my mother or sisters or husband. I’ve lost jobs because I’m positive.’ She also lost an infant daughter to AIDS, but her ten-year-old son – conceived before Rosanna got infected – is negative. Jomo is a bright, healthy boy who loves drawing and football. His mother tries to keep healthy, too. ‘I want to see my son grow up.’

Rosanna does not take ARVs (antiretroviral drugs) but, when sickness strikes, the African Jesuit AIDS Network (AJAN) which I coordinate, helps meet the hospital bills. From time to time, Catholic AIDS programmes invite Rosanna to tell groups the story of her difficult life, explaining her HIV status and encouraging young people to live well and to avoid the mistakes which lead to infection. AJAN supports her courageous witnessing too.

Rosanna is grateful for the assistance but has been looking for something more. ‘Myself, I am young, I want to have a future even if I didn’t finish elementary school. I want my son to be someone.’ HIV-positive and unable to do physically demanding work, she stands little chance of finding anyone to hire her. But recently she hit on an enterprising idea. The landlords in her slum refuse to provide water, telling the abject tenants to find it for themselves. So, with AJAN’s help, she has bought a storage tank and a pump and set up a water business. Things are going well, and she is paying back nearly 2% a month.

I was trying to imagine what Caritas in Veritate might mean for Rosanna and Jomo but, as providence would have it, she dropped in to my office. So instead of guessing, I gave her a four-page summary of the encyclical and, after an hour’s careful reading, she came up with pretty clear ideas of its relevance for Jomo and herself.

1. Rosanna and Benedict XVI love life and see society in much the same way. ‘I know the encyclical is about the whole world,’ she said, ‘but when I read the Pope’s words, he is talking exactly about Kenya, even my slum. He says that the market must not become “the place where the strong subdue the weak”, but it is.’ Billions of us live as neighbours to one another in our global village (or our slum?), yet with too little in the way of fraternal relationships. ‘Kenyan authorities see the poor as a problem. If you do not have a job, they try to send you back up-country.’

‘Our politicians feel supported by foreign aid and just take advantage of the poor.’ Accordingly, aid is misdirected and badly distributed; it creates dependence, generates corruption, abuses the poor and solves nothing. ‘Without ethics, we are in a total mess.’

2. The Pope ‘is thinking in the right channel’, Rosanna said, but many of us have become discouraged and, frankly, lazy. Addicted to sound bites and ideological slogans, the local-cum-global picture seems too complicated to understand any more. Ever more resigned to a fragmented world, perhaps without realising it, we just let others (‘the market’) decide.

By contrast, Benedict XVI seems tireless in wanting to understand and find the way forward. Without preaching yet showing us how, the Pope invites us to think clearly about (our) society and (our) economy. He shows us how to put order into our thinking, keeping things in their proper places. Social science seeks the facts and the trends, social policy implements governmental decisions about what to do; but only we (believing and thinking people) can weigh up the pros and the cons, only we can opt for the basic values and work for what is best under God for the whole human family.

For example, Benedict XVI shows that respect for life and responsible sexuality are essential: ‘Openness to life is at the centre of true development.’ Rosanna concurs. Honesty and true charity aren’t born of sentimental wishing; they hang on a complete picture of humankind, which can only come from God.

‘In promoting development, the Christian faith does not rely on privilege or positions of power,’ the Pope affirms, ‘but only on Christ.’ To which Rosanna adds, ‘so I urge the Church to show us what being a Christian is all about. Isn’t it loving your neighbour?’

3. Do not think the encyclical is full of grand social schemes. Throughout, the Holy Father calls for practical solutions to real problems. ‘Solutions need to be carefully designed to correspond to people’s concrete lives, based on a prudential evaluation of each situation.’ Rosanna is equally practical, coming up with the idea of selling water to better the lot of her neighbours and her little family.

The heart of the encyclical is gift, gratitude, graciousness, gratuitousness: ‘gift’ and ‘gratuitousness’ come up about three dozen times. To acknowledge the abundant gifts that we are and receive is to be filled with gratitude; it is also the fundamental truth of our situation. So, we are creatures before we are bosses or employees; responsible, but not totally in charge; each our own person but radically related to one another. Instead of doing whatever we like, as global culture cajoles us to, without reference to humanity and God, things will get better only if we each graciously, gratuitously give our best: mind, heart, goods, time.

For Rosanna, forgiving her relatives, living for Jomo and his future, teaching youth to be responsible in the face of AIDS, leading a little support group for HIV-positive women, selling water to her neighbours – all of this helped prepare her to read and appreciate Caritas in Veritate very much.

Surely the best that she and I can offer is encouragement to read Caritas in Veritate. Yes, really read it and consider and pray over every sentence carefully. The message is in the title: ‘Think! Love!’ We must do both if Rosanna and Jomo and we are to have authentic human development.

Michael Czerny SJ is Director of the African Jesuit AIDS Network (AJAN), based in Nairobi.

Adapted from an article originally published by The Catholic Register, Toronto.

More on Caritas in Veritate:

Frank Turner SJ – ‘To all people of good will’

AIDS, Africa and the Value of Abstinence