Skip to main content
Photo by spentrails at flickr.com 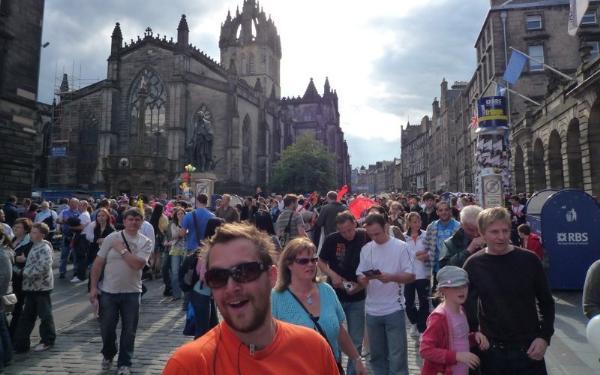 The summer season is punctuated by festivals, which unite people who share a passion for the arts though they may be of many nationalities and from all walks of life. In bringing people together, can these events reveal something of the relationships to Christ and each other to which we are called in the Eucharist? Fr James Crampsey, a parish priest in Edinburgh, sees a reflection of the biblical notion of pilgrimage in the city’s annual festival.

After forty years away, a year ago I returned to Edinburgh to live and work. My brother was driving me over from Glasgow and at a certain surprisingly early point in the journey on the M8, you get a glimpse of Arthur’s Seat, and as the journey goes on, you continue to see it from a variety of angles. A few weeks ago I was in Fife, and from different places along that beautiful coast, too, Arthur’s Seat appears in different configurations, but always recognisable – inviting you, drawing you towards itself.

On closer approach to Edinburgh, it is the Castle that becomes the homing beacon. The similarity to the Temple of Jerusalem and the mountain on which it stood is suggestive. So it is not too difficult to see a comparison between the word picture which Isaiah (66:18-21) paints of the pilgrimage of the nations, from the extremes of the known world – Tarshish (Southern Spain), Put and Lud (Africa), Javan (Greek settlers in the Aegean) and Tubal (near the Black Sea) – with the pilgrimage of the nations which travel to Edinburgh for the events associated with the annual Edinburgh Festival, and indeed with those who make a similar journey to all manner of festivals and celebrations.

For Isaiah, this whole event is part of God’s on-going creativity, dynamic enough to be called the New Creation. To a group whose identity was formed in the difficulty of exile and whose future identity is tied up with the operation of the Temple, the Lord says, surprisingly, shockingly, that they are going to have to share the central role of ministering to their God in their sanctuary with these pilgrim outsiders. ‘And I will also take some of them as priests and Levites, says the Lord.’ (Is 66:21) Just at the moment when they finally have their own God and their own place to themselves again, God tells them they have to share it with others.

Pilgrimage is not easy, as we read in the letter to the Hebrews (12:5-13), whose addressees, after the destruction of the Jerusalem temple, have to find an alternative place to head for. The other place,then, is the heavenly sanctuary to which Jesus Christ has obtained and given access. Old certainties are to be turned over; a new creativity is at work.

We hear similar messages in Luke 13:22-30: the outsiders are going to take precedence over the insiders. The macrocosm of the place to come to, the city set on a hill, the heavenly sanctuary, has a microcosm in this Gospel reading: the narrow door, the door that is locked. How do you get in?

But it seems to me, that there are two doors: there is the narrow door where a few people expect to get in, but not many do. And there is the presumed door through which the whole pilgrimage from the four corners are just pouring in. Sometimes, it seems as though Christ’s self-giving has fashioned access for us to this heavenly sanctuary, then we ourselves build a framework and a door to make it difficult to get in. There is a well known story about St Peter showing someone round heaven, and they come to a walled garden from which there are sounds of happiness and laughter. ‘Who’s in there?’ asks the person on tour. ‘Oh,’ says St Peter, ‘that’s the Catholics, they think they’re the only ones in here.’

The sum of human achievement cannot be the fabrication of a barrier. On the contrary, it is the creation of space for freedom, a freedom that touches the hearts of human beings and that takes concrete shape in the interconnected lives of human beings.

Recently I came across a passage from Marcel Proust. Here is an amazing writer, bed-ridden for a large part of his life, writing about high society and aesthetics and having a passionate commitment to justice for Alfred Dreyfus. It is worth remembering that the cathedral was one of his images for the totality of art that his novel attempted. But here he describes the awakening of his narrator’s artistic identity in his novel, In Search of Lost Time:

Through art alone are we able to emerge from ourselves, to know what another person sees of a universe which is not the same as our own ….Thanks to art, instead of seeing one world only, our own, we see that world multiply itself and we have at our disposal as many worlds as there are original artists, worlds more different one from the other than those which revolve in infinite space, worlds which, centuries after the extinction of the fire from which their light first emanated, whether it is called Rembrandt or Vermeer, send us still each one its special radiance.

Radiance is a good word for the effect of a work of art. It can both speak of the work of art itself, and also what it does. The best of the arts in the broadest sense illuminate, cast light on truth: the truth about myself, the truth about human beings as we interact with one another and the world we inhabit. Responding to such illumination is an act of self-transcendence, stepping out of our comfort zones into a new space where something creative can happen to us. Self-transcendence is the way of walking on the pilgrimage in search of the glory of God which Isaiah talks about. ‘The glory of God is human being fully alive’, says St Irenaeus; in other words, the radiance of the other who is God becomes grounded in human beings in a mutual searching. At a festival such as is being celebrated in the city of Edinburgh in these weeks, not everything is comfortably religious for the believer; indeed many things may seem to be antireligious. However, the metaphor of the pilgrimage suggests that, on the journey, we don’t have to be altogether comfortable with one another, but that we are all rubbing shoulders in the struggle for a self-transcendence which is overseen by the Holy Spirit in energising the New Creation. The things that we are uncomfortable with can be precisely those which hold up a mirror to the disfigurement of the human that we ourselves in complex ways are party to. We need to understand that we need to be reconfigured as part of our journey towards transfiguration, the grounding of the radiance of the other in us. And for Christians, that dynamic is inherent in what we celebrate as Eucharist. Jesus Christ brings his own transfigured disfigurement to the Eucharistic table, the broken body, the blood shed for us. We bring our desire to be configured by him and with him. It is in that mutuality that both he and we are transfigured by God’s glory, and that is possible for women and men to be fully alive.

Disfigurement calls us to justice, being configured to Christ draws us to love, and being transfigured fashions the ugliness perceived with love into something of the glorious beauty which speaks the truth about humanity and God.

Fr James Crampsey SJ is Parish Priest of the Church of the Sacred Heart, Edinburgh.

Political mindfulness and the plight of modern Britain