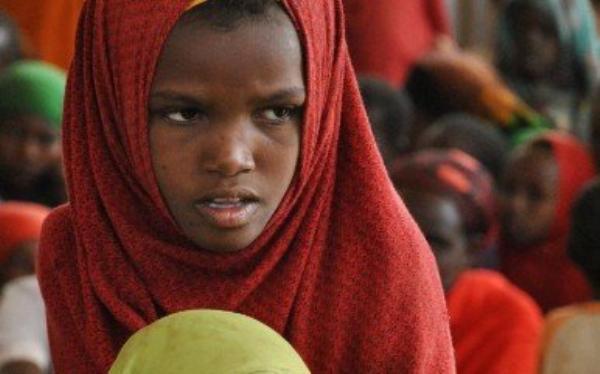 East Africa is currently suffering its most severe drought in sixty years. The worst-affected country has been Somalia, with famine in five districts, resulting in an outpouring of refugees to neighbouring Ethiopia and Kenya. Father Frido Pfleuger SJ, regional director of the Jesuit Refugee Service in Eastern Africa, has just returned from a visit to the Dollo Ado refugee camps in south-east Ethiopia, and in this interview he describes his impressions of the situation on the ground and how JRS is getting involved.

Father Frido, you are just back from a four day visit to the refugee camps in Dollo Ado. Can you describe what the situation looks like?

It is a difficult situation. There are now four camps in the area of Dollo Ado. The first two camps, Bokolmayo and Melkadida, were set up in 2009 and 2010 respectively, so they are a little more developed: they host around 40,000 refugees each. The third camp, Kobe, was set up a couple of months ago and the fourth one, Helawen, just opened on 4 August. By now, around 7,000 refugees should be living there.

The area where the camps are located is totally dry and desert-like. Fortunately, the Genale River provides enough water which is treated and trucked to the four camps.

When we visited the transit centre last Tuesday it still hosted more than 12,000 refugees. They have been camping there for weeks and are now being transferred to Helawen. The transit centre will soon be empty because the number of refugees arriving every day has gone down considerably, from 1,700 in June to 100-140 in August.

We were told that the Somalis send their elders to assess the situation in Kenya and Ethiopia and they found the situation in the Kenyan camps better than in the Ethiopian camps; so they advise people to go to Dadaab (north-east Kenya), which causes a huge problem for Dadaab.

There are now almost 120,000 refugees in the Dollo Ado area. What impressed me most and what is really very sad and touching, is the huge number of children in every camp. More than 80% of the refugee population are children below the age of 18.

There are children everywhere! And they have nothing to do. From my impression, the worst situation is Helawen, because the camp just started last Friday there is no infrastructure at all. There are lines of tents and lots of children in each tent. It is a rocky area with some thorny bushes, there is no shade and there is no space where they can play. It is so saddening to see their situation.

And what I found most astonishing: you greet them and they smile at you, friendly, and look at you with open eyes. Many of them need special treatment because they are malnourished. Some NGOs are already working very hard to make sure the children and in particular the acutely malnourished ones, get fed. It is an incredible situation, very hard to describe. I think JRS has to act very soon, because it is our obligation to help the poorest of the poor, and I have seen them in these camps.

Now that you have seen the situation on the ground, do you have a more concrete idea of how JRS could become involved?

Given that there are so many children under 18 around, I think the best way to create a conducive environment for them is to build schools. When they are in school, they have something meaningful to do and are secure. It also gives them a perspective for their future.

My impression is that the Somalis will stay in these camps for a long time, if the situation in Somalia does not change. And it does not look like it will improve soon, so it makes sense for us to provide education.

Since primary education is run by ARRA (the Ethiopian government’s Administration for Refugee and Returnee Affairs) JRS should provide secondary education in one of the older camps – Bokolmayo or Melkadida – where the number of children is also very high, and we should start as soon as possible.

There is no secondary school in proximity to the camps, except in Dollo Ado. Bokolmayo is 100km from Dollo Ado, and Melkadida 65km. In order to help the youth, we should also start providing other activities in the area of psycho-social support, such as sports activities, theatre, drama, so they also have something meaningful to do over the day. And then we should set up a counselling system in order to train refugees as counsellors who can reach out to the different communities in the camp. With all the violence these people have experienced it will be very important for them to get this kind of support.

If JRS sets up a secondary school, we would also take in students from the local community which is always a big advantage, because it improves the relationship between the refugees and the local community, and it gives both sides a chance to get to know each other. Refugee and native students can talk to one another; they speak different dialects of the Somali language, but, in any case, secondary education would happen in English.

We will also consider setting up boarding facilities for students from Melkadida camp which is about 30km away. The primary school there is still under construction but we were told there are students in the camp who have accomplished their primary education in Somalia. Once we do a more in-depth assessment we will know more. Eventually, we can also help ARRA to set up more primary schools in the other two camps, Kobe and Helawen, because there are so many children and there is no school at all.

What are the next steps for JRS to start working there, and what is the time frame you are thinking of?

Within the next couple of weeks we have to send in a team which will do an in-depth assessment and start setting up some of the buildings and activities. We will need to recruit very good staff, because it is a very tough environment to live in and so far, there is almost no infrastructure or facilities in place. Staff will have to sleep in tents and live in very simple conditions.

The next step would be to start the construction of the secondary school and, maybe at the same time, of a JRS office compound, always on the condition that we have sufficient funds. The most important, however, is the secondary school building because it can be used in many different ways.

Once we are present and have an institution on the ground it will be easier to respond to other needs which we might not even be aware of now. The academic year in Ethiopia starts in September which might pose a challenge because there is no way we can start our activities by September. But I am convinced that we can find a solution, such as starting with an English preparatory class, social activities or a compressed first school year.

If you think back over the last four days, is there something that struck you particularly, that you would like to share?

It was one of the worst things I have seen in my life: All these little children in the desert, in the heat and the dust, on the rocks, between the thorny bushes, looking out of the tent doors, smiling at us, having nothing to do. The camps are like little towns, little towns full of children.

There is food and some water but not much else. It gets very windy in this area and when the wind is strong, the sand gets all blown up and you cannot see further than 10 metres, and these people live there.

There are hardly any men in the camps, most of the families are just single mother families. The men are either dead or disappeared, or they remained in Somalia looking after the livestock, or have been recruited by al-Shabaab or were not allowed to leave the country. The women and the children have been allowed to leave the country, but it is heartbreaking to see all these thousands and thousands of children doing nothing. Therefore, we have to start doing something. It is our moral obligation. We cannot ignore this situation, and I think the plan we now have in mind gives us a good starting point.

Father Frido Pfleuger SJ is the regional director of the Jesuit Refugee Service in Eastern Africa.

Support the work of JRS in east Africa

From hostile environment to loving encounter

iWitness: ‘Freely have you received, freely give’