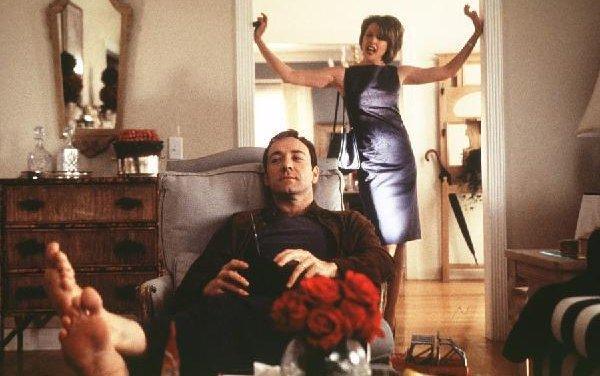 Our fourth Deadly Sin on Film is often thought of as an ‘unspectacular sin’, says Rob Marsh SJ, but we would do well to pay more attention to the real nature of sloth and the dangers of falling into its trap. How does 1999’s Best Picture, American Beauty narrate a slothful existence and something of an Ignatian transformation in its central character?

As sins go, sloth seems a cosy one – a slippers and pyjamas, snoozy sort of sin. What’s the harm of a little laziness, a little too much leisure, the odd siesta in front of the TV with crisp crumbs down your front?

Sloth is indeed an unspectacular sin. To the modern mind it suggests indolence and laziness, with the couch potato as its chief representative. Compare that with greed, lust, or anger and it will not win any prizes in the Sin of the Month Club. Couch potatoes do not seek world domination. They do not wage wars or torture innocents. They do not bring down world economies. Sloth seems at best a sin of omission. Even its corresponding virtue, diligence, sounds boring. Who wants that on his tombstone – ‘He was diligent’?

But sloth used to be about much more than being motivationally-challenged. What got sloth into the ‘Best of’ list and earned it the title ‘the noonday demon’ was its inner heart which is well-hidden today. The early Christian monks knew sloth by its Greek name, acedia, meaninglack of care – when all the things you should care for have lost their savour.

Here is Evagrius Ponticus writing in the 4th century about this noonday devil:

First of all he makes it seem that the sun barely moves, if at all, and that the day is fifty hours long. Then he constrains the monk to look constantly out the window, to walk outside the cell, to gaze carefully at the sun to determine how far it stands from lunchtime … Then he instils in the monk a hatred of the place, a hatred of his very life itself, a hatred for labour. … He depicts life stretching out for a long period of time, and brings before the mind’s eye the toil of the ascetic struggle and, as the saying has it, leaves no leaf unturned to induce the monk to forsake his cell and drop out of the fight.[1]

Acedia is a very restless kind of indolence, a desire to be anywhere but here, doing anything but the one thing given to do. In a spiritual sense, it is avoiding the one thing given by God for the person’s own joy. In a psychological sense, it is avoiding the person’s true self in favour of any number of substitutes. Far from being a state of drowsy rest, Joseph Pieper describes it as ‘that deep-seated lack of calm which makes leisure impossible’. [2]

Kathleen Norris describes the temptation of acedia thus: ‘If I wanted to, I could live just barely, refusing the gift of each day’.[3] That is the temptation of the capital sin of sloth – to live just barely – but is that not simply an unfortunate affliction, a kind of melancholy or depression? What makes sloth sinful? It is the element of refusal, refusal of the gift of each day. It is all the choices that build up the habit of not being moved by the real joys on offer from God so as to eventually not care enough to relish them and respond.

Dorothy L Sayers amplifies this facet of sloth to draw out its societal consequences. It is more than mere idleness:

[It is] that whole poisoning of the will which, beginning with indifference and an attitude of ‘I couldn’t care less’, extends to the deliberate refusal of joy and culminates in morbid introspection and despair. One form of it which appeals strongly to some modern minds is that acquiescence in evil and error which readily disguises itself as ‘Tolerance’; another is that refusal to be moved by the contemplation of the good and beautiful which is known as ‘Disillusionment’, and sometimes as ‘knowledge of the world.’[4]

Sloth can appear to be almost a virtue: the slothful can seem charitable and understanding or even beatifically at peace, but it is the peace of sleep and avoided conflict rather than peace worked for and won.

So what is the answer to sloth? Cassian advises sternly that all you can do is stay in your cell and face down the demon. Aquinas recommends diligence – and a hot bath. The film American Beauty tells a very different story of redemption and one that resonates with an Ignatian understanding of desire.

When we first glimpse Lester Burnham he is asleep – literally and metaphorically. American Beauty, his story, isabout him waking up; waking up to life and to death. It is the power of beauty that wakes him up. It is also what gets him shot.

At the start of American Beauty Lester is ‘living just barely’. He is bored and stuck, finding no pleasure in life or work or family. He is going through the motions – wake, wash, work, eat – but he knows something is missing; he remembers that he and his family used to be happy. He is in the grip of sleepy sloth; he knows he is only half-awake. His wife Carolyn, in contrast, is lost to sloth’s restlessness: she keeps up appearances, practises her self-help mantras, works desperately to sell property and longs to be elsewhere.

Carolyn will not come to her senses until she is shocked by the film’s climax, but Lester’s coming round is the core of American Beauty. What startles him awake is the sight of his teenage daughter Jane’s friend and fellow cheerleader, Angela, and the altogether inappropriate desires it prompts. Yet the film garnishes Lester’s naked fantasies with red rose petals (the variety ‘American Beauty’ of course) suggesting that more than just lust is in play. Lester may be, as Jane says, ‘some horny geek-boy’, but he is also responding to beauty. Beauty rouses him: ‘It’s the weirdest thing’ he says. ‘I feel like I’ve been in a coma for twenty years, and I’m just now waking up’. [5]

Lester’s reaction to this arousing beauty is deeply irresponsible. He quits his job, starts to smoke dope, he lazes around, he buys a hot car, he starts to work out. His wife is furious and his daughter embarrassed. It seems like a step deeper into sloth but with the difference that he starts to enjoy life again, he starts to care.

He reminds me in some part of Ignatius Loyola. His own conversion swapped one sort of vainglory with another. He was just as extreme and hot-headed and proud after his initial conversion as he was before. But in paying attention to his many and conflicting desires he was able to slowly sift out the ones which led him to life and let them eventually transform him.

Ignatius learned to trust attraction enough to let it be the place where God continued to create him. Lester’s own attractions, in a humbler way, do the same job. It is no accident that American Beauty dwells on the revelatory role of beauty.

Alongside the story of Lester’s transformation the film unfolds a thread of theological aesthetics, a story about beauty and its power to show the depths of things. This thread is woven through the ambiguous person of Jane’s boyfriend, Ricky, who observes the world through a video viewfinder and finds beauty in the least promising of places.

Ricky: Have you ever known anybody who died?
Jane: No. … Have you?
No but I did see this homeless woman who froze to death once. Just laying there on the sidewalk. She looked really sad. … I got that homeless woman on video.
Why would you film that?
Because it was amazing.
What was amazing about it?
When you see something like that, it’s like God is looking right at you, just for a second. And if you’re careful, you can look right back.
And what do you see?
Beauty.

Beauty: Carolyn works frantically at its surface; Jane saves up for cosmetic surgery; Lester lusts after a teen; next door, the Colonel (Ricky’s father) suppresses his attraction for men; but drug-dealing Ricky seems to know that beauty can be trusted to open a dialogue with God.

One of the film’s lasting images is of a white plastic bag blown about by the wind, captured on video.

Ricky: it was one of those days when it’s a minute away from snowing. And there’s this electricity in the air, you can almost hear it, right? And this bag was just … dancing with me. Like a little kid begging me to play with it. For fifteen minutes. That’s the day I realized that there was this entire life behind things, and this incredibly benevolent force that wanted me to know there was no reason to be afraid. Ever.
Video’s a poor excuse, I know. But it helps me remember… I need to remember…
Sometimes there’s so much beauty in the world I feel like I can’t take it … and my heart is going to cave in.

In their own way, each of the film’s characters is pursuing beauty, dealing in different ways with attraction, attractiveness and desire – all except the Colonel who has so suppressed his own attraction to men that when, through misunderstanding, he finally lets it briefly emerge, he turns to violence.

Lester’s redemption comes in the nick of time. He has the chance to act out his sexual fantasy with Angela, but a sudden moment of vulnerability in her awakens in him instead a fatherly affection, for her and for his own daughter. He discovers what he really desires. The very thing he has been avoiding is given back to him: his vocation as father and husband.

This moment of epiphany happens just in time for him to get shot. The film climaxes with an impossibly beautiful image of his dead face reflected in a puddle of glossy blood. The moments of beauty that flash before his eyes are narrated by the voice of his spirit, expressing gratitude for each moment of his ‘little life’, and intercut with brief shots showing the impact his death has upon each of the characters around him.

Lester: For me, it was lying on my back at Boy Scout camp, watching falling stars…
And yellow leaves, from the maple trees that lined my street…
Or my grandmother’s hands, and the way her skin seemed like paper…
And the first time I saw my cousin Tony’s brand new Firebird…
And Janie…
And Janie…
And … Carolyn…

We all need to wake up. We all need to care. The manuals set sloth in opposition to the virtue of diligence but American Beauty suggests that the antidote to sloth might be desire, even inappropriate desire, forbidden desire, downright wrong desire. Lester Burnham is saved from sloth by irresponsible desire that finally leads him to something finer. Is that too rosy a view of desire? Maybe. I suppose it depends how much faith we have in ‘this entire life behind things’ and the gracious power of God through beauty to awaken the soul.