Skip to main content
Photo Sum_of_Marc by at flickr.com 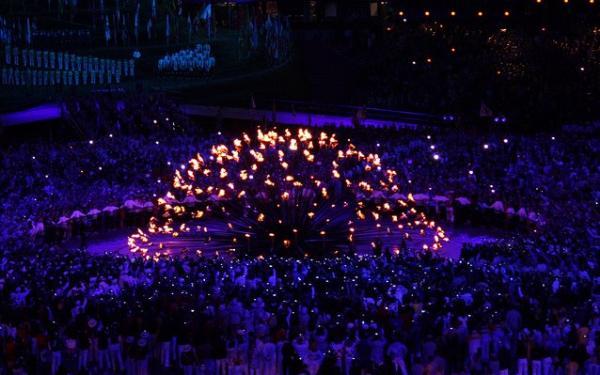 Frank Cottrell Boyce, the writer of the Olympic Games Opening Ceremony that dazzled the world nearly two weeks ago, offers a glimpse into some behind-the-scenes moments in the run up to the unveiling of London 2012’s best-kept secret. Writing exclusively for Thinking Faith, he gives his own take on the various interpretations of the ceremony and explains how he found his own Pentecost in the Olympic Stadium.

I am still having flashbacks to some of the best moments of working on the Olympic Opening Ceremony.

One evening, some months ago: I was alone on the platform at Bromley-by-Bow when it was invaded suddenly by hundreds of volunteers heading home from their rehearsal for the Olympic Opening Ceremony: Londoners of every shape, size, age, race and ability, each carrying a little bottle of water, piled onto the train, laughing and chatting. A party on rails, what Larkin called ‘a frail/ Travelling coincidence’. As, station by station, the party disintegrated, to quote Larkin again, ‘what it held/ Stood ready to be loosed with all the power / That being changed can give’. I had a really strong sense that all the ideas we had had and work we had done for the ceremony were just a pretext. What mattered was the way the event would bring people together, either as participants or spectators: being together was the most important thing.

A Saturday a few weeks before the ceremony: Ihad to go and help to brief the BBC crew at the venue. My wife, Denise, came with me and we spent an hour or so just wandering round the stadium: standing up on the ‘Tor’, walking through the ‘meadow’. Almost everything had been secret until then. Nothing that is secret feels quite real; all secrets have a smack of make-believe about them. But having her with me that day was like having her come to Narnia with me. What was happening was magical and dangerous but it was definitely real at last.

A technical rehearsal, a few days away from the ceremony itself: The audience was composed mostly of tens of thousands of friends and relatives of the performers. So for the duration of the show, thousands of people were pointing down at the performance space yelling, ‘There’s our Wayne!’ or, ‘Look, it’s Suzy!’ It had the warmth and excitement of a £27 million nativity play.

It must have been the same night, after midnight: The performers and the audience had all gone home. The stadium was dark and eerily deserted. Anxious little knots of people were meeting in doorways and technical areas. There was a sudden hush and everyone drifted out into the seating areas. We sat in ones or twos in the vast, empty stands. We were about to see ‘Betty’ for the first time. ‘Betty’ was the codename given to Thomas Heatherwick’s Olympic cauldron. It was made of 204 ‘petals’ – one for each nation. Each national team brought their petal to the stadium with them. During the parade of athletes, the petals would be fitted to their metal ‘stems’ and, at the lighting of the torch, these stems and petals would rise up to create, from each nation’s spark, a single flower of flame. At the Closing Ceremony, each nation would reclaim its petal and take it home. It was a simple, beautiful idea, an idea with a story to tell – an idea in which so much could go wrong! In the deserted stadium that night, the flames were lit. They formed a circle on the floor like a huge campfire. One by one, the tongues of flame lifted into the air. The gas was making an oddly familiar noise, a syncopation of hisses and clicks. I suddenly remembered where I had heard it before. As a little boy I had lain on my grandmother’s hearth rug, looking at the underneath of her gas fire and watching the spectre-blue flames chase each other up and down, clicking and hissing in fascinating sequence. As more and more of the flames rose up, until they were almost all joined together, Mark Tildesley, the ceremony’s main designer, leaned over my seat and whispered, ‘There you go, Frankie, Pentecost’. How did I miss that?! How was it that Mark’s head was in Acts of the Apostles, when mine was in a flat in Kirkdale?!

Since the ceremony I have heard hundreds of attempts to interpret it. Some said it was too lefty; Boris Johnson saw Margaret Thatcher in the heroic Mary Poppins. Some said it was too multicultural; some said too Christian. I have had people ask me if the tree on the Tor was a reference to the cross. The most pleasing comment was from my daughter who said, ‘it was so personal. Loads of things that I like. I just felt that someone had put them all in one show for me.’ I have done a lot of press since the event and many people have pressed me to authorise one interpretation or the other. But the only legitimate one is Gabriella’s.

My big weakness as a writer is that I plan too much. I find it hard to set out without knowing where things are going to end up. When I turned up at the beginning of the process I got out my laptop and started typing. Danny Boyle told me to put it away. He spent months just encouraging us to collect and share things – songs, poems, images – that moved or excited us. In the end, a pattern began to emerge. I was amazed on the night how many of those first images found their place in the show, often in the most unexpected of places. Danny had a photo of a young woman swing dancing, purse in hand, in a dance hall in the fifties. It was drenched in energy and hope. Somehow it became that brilliant, baffling NHS sequence. Danny’s technique was to make us let go of our disciplines and instead ride our own excitement. His vision was to create something visceral, to create a show that did not describe or comment on Britain but made you experience it, through laughter, fear, ecstasy or wonder. The important thing was not the show’s content so much as the fact that the whole nation – and a sizable chunk of the world – would share that experience. Everything we share brings us closer together. The fact that we can share laughs and thrills says all that needs to be said about our common humanity.

It was an intensely personal process and therefore an extremely frightening one. Danny was putting not just his reputation and career on the line, but a great deal of himself. So my daughter was right. I find it miraculous that such a very personal process could speak so eloquently to so many people. Some people have said it was too willfully British, but it got massive ratings in the United States and I have had emails from as far away as Siberia. The more particular a story is, the more universal it becomes because the more of our humanity we share, the more profoundly we connect with one another. So maybe Mark Tildesley was right to remember St Peter standing up in that market place: unskilled in public speaking, not knowing any language but his own, he was ready to put his vulnerability in front of the nations, ready to start out without knowing the ending. Maybe there was some kind of Pentecost here.

Postscript: During the build up to the ceremony, I was greatly disturbed by the decision to allow Dow (the chemical company which bears ultimate responsibility for the Bhopal disaster) to sponsor the stadium’s wrap. I thought of resigning for a while but decided that here was an issue about which people have been resigning and protesting for thirty years with no good outcome. In the end I decided to use my brief moment of access to power, and the creative energy that I found in the opening ceremony team, to create a political proposal. I have sent this to the International Olympic Committee and to the Department for Culture, Media and Sport, and have tried to send it to Dow. You can read it here: http://www.guardian.co.uk/sport/interactive/2012/jul/29/olympics-2012

Frank Cottrell-Boyce has been writing screenplays and novels for over 25 years. His credits include: Millions, 24 Hour Party People, God on Trial and Coronation Street. He was the writer of the Opening Ceremony of the London 2012 Olympic Games.