Skip to main content
Photo by mateus27_24-25 at flickr.com 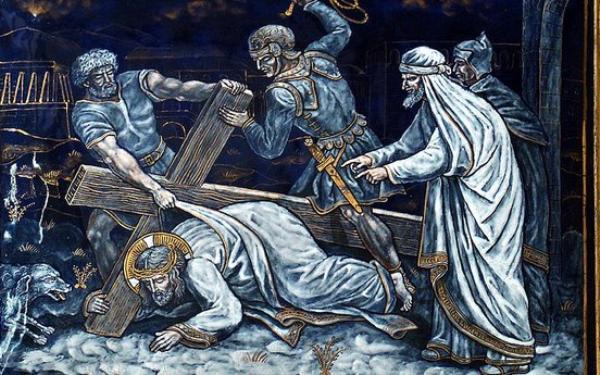 As we follow more and more closely Jesus’s own journey through the Stations of the Cross, Nicholas King SJ offers reflections on the seventh, eighth, ninth and tenth Stations.

Once again, there is no scriptural warrant for this station, however probable the story may be in itself; so here is another story of a disciple who falls.

And Peter was still below in the courtyard. And there comes a single little slave-girl of the High Priest. And seeing Peter warming himself she had a good look at him and says, ‘You were also with the Nazarene, [that] Jesus’. And he denied it, saying, ‘I neither know nor understand what you are saying’. And he went out into the forecourt. And the little slave girl saw him and began again to say to the bystanders, ‘This [fellow] is from that lot’. And he again denied [it]. And again after a little the bystanders started to say to Peter, ‘You must certainly be [one] of them: you’re a Galilean’. And he began to curse and swear, ‘I don’t know this fellow you’re talking about’.

And immediately for the second time a cock crowed. And Peter remembered the word, how Jesus had told him, ‘Before the cock crows twice, three times you will deny me’.

Not very long ago, Peter had been boasting ‘even if I have to die with you, no way will I ever deny you’. This had been in response to Jesus’s quiet prediction: ‘Amen I tell you, you, today, on this very night, before the cock crows twice, will deny me three times’, and we rather wish that Peter had not spoken, for here is his first opportunity to put his money where his mouth is, and see what happens.

Jesus is on trial in an adjacent room, and is saying almost nothing; Peter says far too much. When Jesus does speak, he tells the truth; Peter lies. Jesus stands up to the High Priest, Peter is terrified by one whom Mark describes as ‘a single little slave-girl of the High Priest’ (and you can hardly be more insignificant than that). Why is Peter ‘warming himself’? Because the chill of treachery is upon him.

Can you identify with Peter’s cowardice? Have you ever behaved in that way?

Has anyone ever denied knowledge of you in that way? How did you react? How do you think Jesus might react to Peter’s fall?

A great crowd of the populace was following him, and also [a crowd] of women, who were mourning him and weeping for him. Jesus turned to the women and said, ‘Daughters of Jerusalem, don’t be weeping over me. No – weep for yourselves and for your children. Because, look! Days are coming when they will be saying, “Congratulations to the women who are barren, and the wombs that have not given birth, and the breasts that have not suckled”. Then they will start saying to the mountains, “Fall on us”, and to the hills, “Cover us”. Because if they do these things when the wood is green – what might happen when it’s dry?’

Once again, it is the women in this situation who show great courage. It is they, and not the men, who are prepared to stand out against the crowd and show their sadness (and presumably disapproval) at what is happening to Jesus. Notice also Jesus’s ability to see the needs of others in this lethal situation in which he finds himself. He also delivers a very challenging prediction of the days that will come upon Jerusalem and its population.

Meanwhile he is identified with the criminal classes.

Have you ever known suffering people who had the vision to see the sufferings of others? Have you ever found yourself behaving in this way?

Once again, we have to find a fall that afflicts disciples, rather than anything that is recounted about Jesus himself. But we may remember that in Mark’s Gospel there is a certain identification between Jesus and his disciples. Here the fall affects all the disciples.

And they abandoned him; and every one of them fled.

And a certain young man was following along with him, wearing a linen cloth over his naked body. And they arrest him. But he cast aside the linen cloth and fled naked. (Mark 14:50-52)

This takes place at the moment when Jesus is arrested by the party that Judas brought. The ones who ran away in such disorder are the very men who were joining in with Peter in saying that they would never, ever betray him. What a fall is here! And it gets worse, for one of them did not even have the dignity to remain clothed; rather than share Jesus’s fate, he runs away naked, a terrible disgrace for a Jew.

There is no evidence, alas, for the relatively modern legend that the young man was the evangelist Mark. But it is a strange story.

Could this be your story?

Tenth Station: Jesus is stripped of his garments

And they tried to give him wine flavoured with myrrh – but he didn’t take it. And they crucify him. And they ‘divide his garments, casting a lot over them [to see] who would get something’. Now it was the third hour, and they crucified him. And the inscription of his charge was inscribed ‘the King of the Jews’. (Mark 15:23-26)

If nakedness was a terrible disgrace for a Jew, we notice that unlike the young man in the previous ‘station’, Jesus had no choice in the matter; his clothes, and with them what is left of his dignity, are simply taken from him. He did exercise his choice with regard to the wine flavoured with myrrh, and refused to take it. There is some evidence that a drink of this kind was given to condemned criminals to reduce their pain. Perhaps we are to understand that Jesus was determined to keep his sense from being dulled, or, in the words in Gethsemane, to ‘drink the cup’ of suffering that his father had given him. The reference to dividing garments and casting lots is an echo of Psalm 22, which is the Church often prays over while contemplating Jesus’s passion.

The inscription ‘King of the Jews’ is presumably meant as a joke on the part of the Roman soldiers. For Christians, it is very nearly the truth.

Have you ever felt utterly bereft of all dignity in this way?

Have you been the subject of a commercial transaction of this sort?

Do you know anyone who has had to endure the kind of insulting treatment that Jesus is given?