Skip to main content
Photo by Nick in exsilio at flickr.com 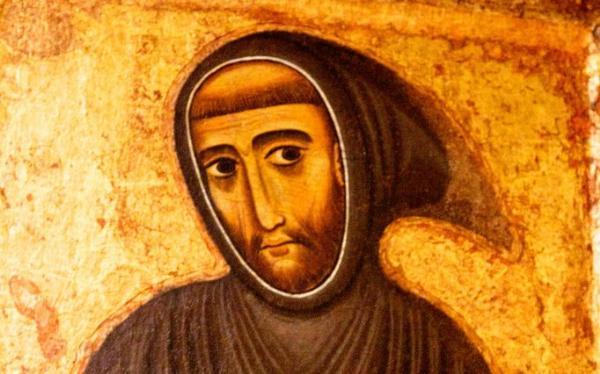 We have spent a lot of time over the past month trying to get to know Pope Francis, but how much do we know about the man whose name he has taken? Brian Purfield explores Francis of Assisi’s unique way of witnessing to the gospel and embracing its challenges.

The figure of Francis of Assisi (1181-1226) has always captured the imaginations of people from all walks of life: Christians and Muslims, royalty and prime ministers, rich and poor, intellectuals and workers, philosophers and theologians, poets and novelists, artists and filmmakers, historians and sociologists, peacemakers and environmentalists, people of all religions or none. Now, for the first time, we have a pope that has chosen the name ‘Francis’.

Shortly after his election, Pope Francis was asked why he had chosen this name. He replied that during the conclave he was seated next to his friend, the Brazilian Cardinal Cláudio Hummes. When it became clear that the cardinals had elected Jorge Mario Bergoglio to be pope, Cardinal Hummes embraced his friend and said: ‘Don’t forget the poor!’ It was at that moment that the newly-elected Pope thought of St Francis of Assisi who was, he said ‘a man of peace, a man of poverty, a man who loved and protected creation.’

These were priorities in Francis of Assisi’s life. While he bore witness to the whole gospel, he tended to emphasise those aspects of it that were least understood or practised in his day, some of which continue to be neglected today. If we look at his life, we can see many reasons why his name has been taken by a pope who has said: ‘How I would love a Church that is poor and for the poor.’

A Father, a Brother and a Bride

Francis knew very well the God in whom he had total trust. For him, God was not someone to be feared but someone personally close, a Father wanting to see his sons and daughters do well, giving them every grace necessary to do so while leaving them free to respond or not in love. Francis often said, ‘Cast your care upon the Lord, and he will sustain you.’[1]

He also had a deep love of Christ. However, it was not the Christ of many of the late medieval paintings – the Pantocrator, the judge at the last judgement - that he loved. It was the Christ of Bethlehem who became one of us because He loved us; the Christ of the Last Supper who gave Himself as food for spiritually starving humanity; and the Christ of Calvary, who died as a sacrifice so that we would be raised up from our own humanity. ‘Consider…in what great excellence the Lord God has placed you, for He created and formed you to the image of His beloved Son according to the body and to His likeness according to the Spirit.’[2]

Overwhelmed at discovering that he had such a Father and such a Brother, Francis’ response was: ‘Love Him totally, who gave himself totally for your love.’[3]His conversion, his penance were things of great joy, for he had found a bride greater than any other, a bride who would never abandon him. Francis wrote of his conversion ‘That which seemed to me bitter was changed into sweetness of body and soul.’[4]

For Francis, the Incarnation was not just the historical event of God becoming one of us. The Incarnation was then, but it is also now. Anyone who accepts the gospel life accepts the commission from God continually to bring forth Christ into our world. Francis put it this way: ‘We are…[His] mothers when we carry Him in our heart and body through love and a pure and sincere conscience; and give Him birth through a holy activity, which must shine before others by example.’[5]

Francis looked around him and saw that almost all of Europe had been Christianised, but Christians had become apathetic. The Muslim world was shut off; the Far East had not yet been reached. Missionary outreach – the challenge of Christ to the apostles to preach the gospel to all nations – was all but dead. Francis founded a new order in the Church, an order of apostles whom he sent out two by two as Christ had done, to stir up apathetic Europe, to penetrate the Muslim religious militarism, to reach the Far East, to respond to the Lord’s call to go to the ends of the earth (Mt 28:19).

Francis lived in a time of rigid class distinction, when even in the monastic rules lay brothers were second-class citizens, when there were masters and serfs, nobles and peasants, maiores and minores; when suspicion and distrust were the order of the day even among friends. He wanted to show that real brotherhood was possible. In a touching phrase in his Testament, Francis recalls his first followers and the start of the Franciscan Order: ‘And after that, the Lord gave me some brothers…’[6] In naming his Order the Lesser Brothers, he wanted to show that brotherhood was his, as well as Christ’s challenge to man’s inhumanity to man.

Francis saw his Order not just as one of brothers, but one of ‘minor’ brothers. Minority, or littleness, contains something of the idea we use today when speaking of ‘minority groups’ – poor, powerless and voiceless. Littleness for Francis was a rejection of the drive for power, prestige and status. It was a desire to become like the anawim of the Bible – God’s poor, helpless and defenceless ones, the ones Christ said were blessed, for theirs is the kingdom of heaven (Lk 6:20). It was a desire to serve and not to be served, a desire to be available, to help, to be concerned, share with, suffer with, rejoice with; a desire to overcome the most evil tendency in any of us – the desire to lord it over another.

Clare wanted to join and work with Francis. In the culture of the time that seemed impossible, yet together they discerned a way forward. Clare and her sisters, in their enclosed life, lived as deep a commitment to the gospel as Francis and his brothers. The ‘form of life’ of the ‘Poor Sisters’ was the same as that of the Friars Minor: ‘To observe the Holy Gospel of our Lord Jesus Christ’,[7] preserving the union of mutual love and observing particularly the poverty and humility of Jesus and of his Most Holy Mother. Many women, then and now, feel second class citizens in the Church. The friendship of Francis and Clare offers hope of a different way forward.

‘A man of peace, a man of poverty, a man who loved and protected creation’

Wealth, affluence, amassing personal property and material goods – these were seen by Francis as deterrents to brotherhood and union with God. Those whose lives are dominated by money and what money can buy are more concerned with things than with people. This is one of the worst perversions of the natural order because it leads so quickly to the dehumanisation of the individual. People are more important than things. Francis’ poverty was meant to witness exactly that.

Francis was seen as a peacemaker in disputes between the maiores and minores in Assisi, between the Christians and the Muslims, between the nobles and their serfs, because he himself was a peaceful man. He told his followers: ‘As you announce peace with your mouth, make sure that you have greater peace in your hearts, thus no one will be provoked to anger or scandal because of you. Let everyone be drawn to peace and kindness through your peace and gentleness.’[8]

Inspired by Francis’ passion for peace, the last two popes have called inter-faith pilgrimages to Assisi. Our day has also seen a proliferation of war among peoples in the name of faith. Francis’ insight that ‘religious war’ was not of God and his desire to act for peace led him to go from the Crusaders’ camp to visit the Sultan in Egypt. This is an inspiration to those who continue to seek for justice and peace.

In 1979, Pope John Paul II proclaimed Francis patron of those who promote ecology. As a friend of the poor who loved all of God's creatures, he invited all of creation – animals, plants, even Brother Sun and Sister Moon – to give honour and praise to the Lord. Francis gives us striking witness that when we are at peace with God we are better able to devote ourselves to building up that peace with all creation, which is inseparable from peace among all peoples. Francis’ deep insight into the inter-connectedness of all of creation and his desire to live simply invites us to take another look at our culture of excesses.

Prayer as a way of life

Prayer, especially contemplative prayer, was so important in Francis’ life that at one point he was tempted to abandon his mission of preaching and retire to a contemplative life. Through the discernment of Saint Clare and Brother Sylvester, God told Francis that his mission was otherwise.[9] But wherever he was - in a cave or the piazza, on Mount Alvernia or in a cardinal’s palace, alone, with the friars or at work - Francis was always at prayer: sometimes contemplative, sometimes spontaneous, sometimes in common with his brothers, sometimes the prayer of work.

Francis and the Church

The Church will always be subject to human weakness. The weaknesses in the Church of Francis’ time were so vast that the Church was hardly a sign of God’s presence. The Church was feared because of its political power; many of the clergy were living scandalous lives; and anti-clericalism, with good reason, was rampant. God called Francis to ‘repair my Church, which you see is falling into ruin.’[10] Francis did so in the way of Christ and not in the way of the world.

The call to repair the Church in our day in the wake of various scandals and abuses of power is as urgent as it was in Francis’ day. We need a shepherd who will deal with the pain and disillusionment, the resultant sense of betrayal that many feel; one who will help the Church become more transparent and accountable.

Addressing the crowds in St. Peter’s Square shortly after his election, the new Pope Francis made a request of the crowd gathered below: ‘Pray for me!’

Francis of Assisi did not wish his followers to be exactly like him. His dying prayer, uttered as he lay on the dirt floor of a hut near his beloved Portiuncula chapel, was: ‘I have done what is mine; may Christ teach you what is yours!’[11] An excellent piece of advice for all of us and a most apt prayer for Pope Francis.

Call and response in St Ignatius and St Francis