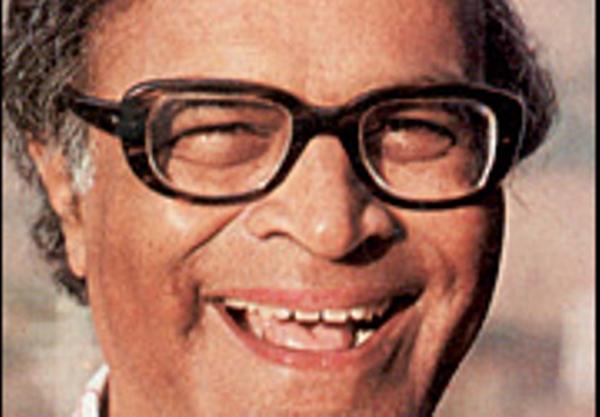 Fr Anthony de Mello is the featured Jesuit this month in a special calendar produced by the Jesuits in Britain.  In this article for Thinking Faith, Karen Eliasen thinks about why de Mello could have been well-described as a ‘contemplative in action’.

The first time I came across Anthony de Mello’s name was not through his writings themselves, but rather through the Vatican’s official response to those writings. This response appeared in 1998, almost ten years after de Mello’s death, in the form of a Notification[1]  put out by the Congregation for the Doctrine of the Faith under the helm of the then Joseph Cardinal Ratzinger. Going through a phase of curiosity about just whose writings in my own times the Church finds objectionable, I found myself reading a brief entitled ‘Concerning the Writings of Father Anthony de Mello, SJ’. I assumed that the issues so affronting the Vatican – too abstract an image of God, too little weight given to Jesus, too deep an undermining of authority – were coming from yet another hard-core but institutionally suspect theologian. But within a week of reading the Notification, the odd coincidence of a small article in a pastoral review magazine coming my way convinced me otherwise – and I was hooked on de Mello. The pastoral article, transcribed from one of de Mello’s unpublished lectures on the Spiritual Exercises  given in the mid-1970s, had the title ‘Quieting the Mind’[2], but it was the heading in bold immediately underneath that made me want to read on: Prayer is fire. There is, I realise, nothing new here, as many centuries of Christian spiritual writing bear witness to. What gives de Mello added appeal is that he is of my own time: the man is on YouTube[3], which makes it all the more interesting to consider what sort of messenger delivers what sort of message. Was he walking the talk when he voiced that age-old insistence that prayer is fire? And if so, might that be what the Notification is really reacting to?

It is not that prayer is merely like fire; prayer is fire, and de Mello warns us to watch that fire intently because it is dangerous. Not just a metaphor for insight and drive, the fire of prayer is a power that transforms people and their lives for better or worse. All good and holy things have their dangers, and among these danger-laden good and holy things de Mello counts, alongside prayer, other familiar experiences (and de Mello is always far more interested in lived experiences than in argued concepts): love, contemplation, wisdom … and not least, truth. It is this latter, truth, that de Mello talks about above all else – or rather, he talks about a ‘keen awareness’ as the transformative appreciation of and response to truth. Unsettling for his hearers, he doesn’t hesitate to use the word ‘violence’ when talking about such keen awareness. Awareness, rather than concerted effort towards a desired goal, brings about transformation. And all transformation, de Mello points out, is violent; but he carefully differentiates between ego-violence, which springs from intolerance and hatred, and nature-violence, which is in obedience to ‘mysterious laws that seek the good of the whole universe.’ This quote comes from one of de Mello’s later published series of talks, The Way to Love[4], in which he very simply spells out what he believes will transform the world towards that ‘good of the whole universe,’ in other words ‘save’ it. In this scheme of things, intolerance and hatred are the antithesis to what de Mello calls clear thinking; so contrary to what we might at first glance conclude, it is not ever-larger quantities of tolerance and love (in spite of the book’s title) that will effect change, but clear thinking. The bedrock of the kind of clear thinking de Mello has in mind is a keen awareness of the ‘abysmal ignorance’ in relation to truth that we all participate in – and de Mello never fails to include himself in this ‘all’. None of us are exempt from this abysmal ignorance because, essentially, the truth is a mystery, and as mystery it is sensed rather than grasped and formulated. This keen awareness is not something to be striven for, or to be acquired through disciplined activity, be that techniques or repression. Rather, this awareness involves a simple letting go of things – or as de Mello refers to it, a simple ‘dropping.’  A natural consequence of this attitude of dropping is behaviour characterised by tolerance and love, and a natural consequence of tolerance and love is a transformed world.

Dropping what exactly, then? Perhaps this is the point at which the Vatican begins to prick its ears in anticipation of the need for a Notification , for what de Mello specifically undermines here is our  ‘programming’ by institutions (including the family) of all sizes and shapes, even if these offer the very best and wisest of traditions. What we have to drop is whatever we have taken in so far of all the traditions and teachings we have already been exposed to, whatever the format or context, whatever the moral value. There is for de Mello something authentic and therefore powerful in the ‘here and now’ whose immediate perception is not fired by others’ take on either the past or the future, but by the alive-and-kicking present, experienced subjectively. That ‘subjectively,’ however, is to be rooted in the keen awareness that de Mello reiterates as the source of any saving transformation. We are not just to swallow unquestioningly even the profoundest of wisdoms of others; we are to drop everything and in that dropping we can hope to find ourselves becoming keenly aware of the here and now. ‘An effortless activity,’ de Mello encouragingly claims this dropping to be, even as he recognises how scared we all are to do just that, ‘scared to lose the only world [we] know: the world of desires, attachments, fears, social pressures, tensions, ambitions, worries, guilt, with flashes of the pleasure and relief and excitement which these bring …’ as one variation of de Mello’s litany runs, a litany familiar enough from the writings of many mystics.

So in discovering de Mello, I found myself engaging with someone hard-core, yes, but hard-core mystically rather than hard-core theologically. Those two qualifiers, mystically and theologically, are so often forced into opposition to one other by institutions who tend to regard their interdependence with suspicion. De Mello was not beyond claiming on numerous occasions that, ‘one of the biggest obstacles to truth is religion.’ In their God-driven searches, mystics can roam far afield from the safety of institutional pronouncements, a roaming often interpreted from the outside as a kind of withdrawal from responsibilities to the world. But de Mello himself was no shirker. Commenting on the role of spiritual directors as purveyors and inspirers of an authentic prayer life, he insists (in that prayer is fire article), ‘Our duty as spiritual directors is to ensure that the inner fire does not make people withdraw from human relations and make them lose their appetite for life.’  Our life always includes others, and ‘dropping’ in this context does not mean ‘withdrawing from’; dropping means to respond to others with a keen awareness of the truth. In de Mello, I began to suspect, I was meeting  a messenger who, with extraordinary and rare effectiveness, was living out his own message, and in that process instilling in the people he interacted with a deep-rooted desire to do likewise: to walk the talk.

For de Mello, prayer was the key practice that made possible, and nourished, a keen awareness of the truth, and by all accounts he himself had a provocative charisma that made people respond to his message from the bottom of their heart. ‘When he spoke of prayer, he radiated a certain force around him that often awakened in the heart of his hearers a real taste for prayer’ (this is how the former Jesuit Anand Nayak[5] puts it in his book on de Mello’s life and spirituality, written as a clear and sober counter to the Notification).  Prayer, with its fiery attributes, invites a movement towards a direct experience of God, and this is what empowers us to withdraw deeply inwardly so as to engage equally deeply outwardly. In the de Melloan universe, deeply is equated with truthfully, and the deeply inward and outward movements are almost experienced in one fell swoop –characterising that familiar exemplar of Ignatian spirituality, the contemplative in action bid to set the world on fire.

The ‘in action’ part of that equation readily fits de Mello himself according to all who met him, whether on retreat, on a course, or socially. His younger brother Bill de Mello, author of a very readable account of Tony’s ‘life and message’ entitled The Happy Wanderer[6], records the testimonies of people from all walks of life: testimonies to his extraordinary energy and joie de vivre; to his booming, contagious laughter; to his great and generous kindness. An ‘indefatigable talker,’ he was consummately at ease giving retreat inputs lasting 6-8 hours for days on end – but he was always lapped up as an exciting and gifted speaker who had an endless supply of wonderful stories to fit any occasion. He comes across in all these testimonies as almost larger than life yet at the same time highly accessible and non-judgemental in his dealings with everyone. Bill recollects his brother’s observation that people usually remember not what you have said, but how you made them feel. Tony de Mello excelled at a sustained ability to make people feel good about themselves at a very deep level without in the least compromising the truth. He was a big talker, but his talking was deep and fired up people.

His refusal to compromise the truth meant that garden-variety niceness played no role whatsoever in de Mello’s big-heartedness. A good number of people have commented that he often seemed to outright enjoy shocking people, but that he always shocked in a way that left people enlightened, and feeling healed rather than feeling hurt. Perhaps it is in his compassionate way of shocking that we can find in de Mello the other, ‘contemplative’ half of the familiar equation. Whatever contemplation he was doing (he apparently always found time in the hour before bed to pray), the fruit was a penetrating and non-judgemental compassion that could shake people to their core. Shock tactics may come across as having more than a tinge of violence about them, but then that is what de Mello insists cannot be avoided in deep-rooted transformation. But I will let de Mello the mystic, the one who provoked the Vatican’s Notification, have the last word on that. It is taken from his The Way to Love: ‘It is this kind of violence that arises within mystics who storm against ideas and structures that have become entrenched in their societies and cultures when awareness awakens them to evils their contemporaries are blind to.’  Such a man, too, was Anthony de Mello, a man of prayer setting the world on fire.

[1] The text of the Notification  is available online at http://www.vatican.va/roman_curia/congregations/cfaith/documents/rc_con_cfaith_doc_19980624_demello_en.html

[2] Anthony de Mello, ‘Quieting the Mind (3)’ in The Pastoral Review , Volume 6 Issue 5. These notes were otherwise left out of the recently published collection of de Mello talks, Seek God Everywhere: Reflections on the Spiritual Exercises of St. Ignatius (Image, 2010)

[5] Anand Nayak, Anthony de Mello: His Life and His Spirituality (The Columba Press, 2007)