Skip to main content
Photo by MI PHAM on Unsplash 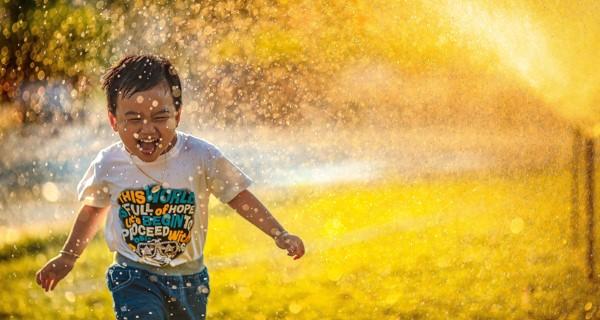 The idea that God’s ways are full of joy and delight has been embraced by many mystics, theologians and spiritual writers through the ages, says Teresa White FCJ. World Laughter Day, which falls on the first Sunday of May, is an opportunity to celebrate the gladness and cheer that come from knowing the love of God.

The squares of the city will be full of boys and girls playing there… They will be my people and I shall be their God, faithful and just. (Zechariah 8:5,8)

What a beautiful picture of ‘the Faithful City’, Jerusalem, as it waits in joyful hope for the coming of the Messiah. The relaxed holiday atmosphere seems to suggest that play is a gift of God, a sign of salvation, and that those playing children are witnesses of eternity. In the following chapter, Zechariah returns to the same theme: ‘Rejoice heart and soul, daughter of Zion! Shout with gladness, daughter of Jerusalem!’ (9: 9) Speaking in God’s name, he makes it very clear that God does not expect the people’s jubilation to be a low-key affair.

People sometimes say that in Western Christianity the generally accepted approach to God, to religion, to ‘church’, tends to be solemn and unsmiling. A non-believer, looking at the average congregation leaving church after Mass on a Sunday morning, might well agree, and even a believer might think there is some truth in this assessment. Perhaps, at least in some parts of Europe, this attitude has something to do with our Jansenist heritage. Yes, much of life can indeed be serious, some of it positively grim: reading the papers, watching the TV news, we are presented with acts of terrorism and cruelty, tragic accidents and unimaginable suffering, and we don’t have to dig very deeply into our own experience to find reasons for anxiety or even despair. Joy, wrote Dietrich Bonhoeffer, ‘does not deny the distress where it is, but finds God in the midst of it, indeed precisely there.’

Darkness creeps into our lives when we do not make time to rest, to get off the treadmill, and when we take ourselves too seriously. Roly Bain, an Anglican priest who is also a professional clown, says in his book, A Call to Christian Clowning’:

God has given us the possibility of dealing with our fallibility, not by feeling terribly guilty about it but by accepting it and laughing about it and transforming it. God’s love is a liberating love with a redeeming smile. The love that is laughter is a gurgling, rumbling, irrepressible love that wells up from the very depths, is quite uncontrollable, irresistible, seems to split us in two. It leaves us changed and full of hope, having glimpsed something of another world, if not the eternal. (p. 39)

Roly’s point seems to be that many of us do not give God a chance to be playful, to smile at us, to laugh with us, to sing with us and dance for joy like those children in the city squares.

Who would not agree that a good laugh has the power to transform even a desperate experience? An amusing situation, a well-told joke, a comical story, can ease an oppressive atmosphere and introduce a note of unexpected hopefulness even when we feel burdened by all kinds of problems. Once, many years ago now, travelling on a train from London to Manchester, I noticed that the young man sitting opposite me was engrossed in a book. I could not see the title, but he chuckled over that book so infectiously that as the train pulled in to Manchester Piccadilly I simply had to ask him what he was reading. It turned out to be The Uncommon Reader by Alan Bennett. He gave the book to me – he said he had just finished it – and I still have it. The man told me that he was on his way to a job interview, and his wife thought that reading this book would help him to relax and therefore he’d be better able to give a good account of himself to his prospective employers. Looking at him, his smiling eyes, his bright, positive expression, I felt it had certainly done that. I’d love to know whether he got that job...

We are made for laughter – we feel the better for it, more relaxed, more confident, more contented. As Victor Hugo memorably said, ‘Laughter is the sun that drives winter from the human face’ (Les Misérables). Hugo might almost have been echoing Francis of Assisi, who many centuries before had said: ‘A single sunbeam is enough to drive away many shadows’. According to Brian Mahoney OFM, the first Franciscans were well known for their joyful approach to life. Francis himself, it seems,

... had no ‘ifs’ and ‘buts’ about God’s love. He was totally taken up and light-headed with the joy of it. He taught people to throw away their self-concern, and approach God with simplicity and childlikeness, revelling in prayer. Those who followed him became known as God’s minstrels and jesters. Ordinary careworn people would flock to be with them, to join the exhilaration and freedom of this sort of merriment…The orders founded by St Francis emphasised poverty, but they were renowned for their singing, joking and merry-making.

Many other mystics also tell us unequivocally that God’s ways are full of joy, delight and laughter, and they believed that God invites us to follow those ways. Mechtild of Magdeburg would have been nineteen or twenty years old when Francis died, and at that point had not yet left her home in Saxony to join the Beguine community in Magdeburg where she was to spend many years of her long life. Indeed she may have known little or nothing about Francis, but she seems to have been a kindred spirit. She wrote in one of her poems: I, God, am your playmate!/ I will lead the child in you in wonderful ways/ for I have chosen you.’ And in another:

I cannot dance, O Lord,unless you lead me.If you want me to leap with abandon,you must intone the song. Then I shall leap into love,from love into knowledge,from knowledge into enjoyment,and from enjoyment rise beyond all human sensations. There I want to remain, yet want also to circle higher still.

Julian of Norwich, born more than a century after Mechtild and living at a time when the Church was deeply immersed in the Inquisition and the serious matter of the refutation of heresy, places her focus on divine grace rather than human failings and errors. She called God ‘the Glad Giver’ and some of her favourite words seem to be around the concepts of ‘rejoicing’ and ‘delight’. She wrote: ‘then showeth our courteous Lord himself to the soul – well merrily and with glad cheer – with friendly welcoming.’ For Julian, joy is a sign of the greatest flourishing of a human life, of a Christian life, and her God is a God of joy, who takes pleasure in the whole of creation.

Another writer who appeared to consider joy and laughter to be essential accompaniments to the spiritual journey was Anthony de Mello. In his book, One-minute Wisdom, he offers many hilarious snippets to encourage his readers to approach the mystery of God, not with serious demeanour and puckered brow, but chuckling and smiling. Here is one of my favourites:

The Master never ceased to attack the notions about God that people entertain. ‘If your God comes to your rescue and gets you out of trouble,’ he would say, ‘it is time you started searching for the true God.’ When asked to elaborate, this is the story he told: ‘A man left a brand-new bicycle unattended at the marketplace while he went about his shopping. He only remembered the bicycle the following day – and rushed to the marketplace, expecting it would have been stolen. The bicycle was exactly where he had left it. Overwhelmed with joy, he rushed to a nearby temple to thank God for having kept his bicycle safe – only to find, when he got out of the temple, that the bicycle was gone!’

I have shared this little story with many groups of people, young and old, and it unfailingly produces gales of laughter.

There are times when we need to abandon the continual need to solve problems, to help and to correct. We need to give ourselves permission to set aside, if only for a short time, our busyness and guilts and worries which can so often lead to stress, broken relationships and anxiety. Then we can once again meet the God who is at home within us. Then we can rediscover the gaiety and joy, the delight and playfulness that God offers us.

Joy to the World?

The Word was God