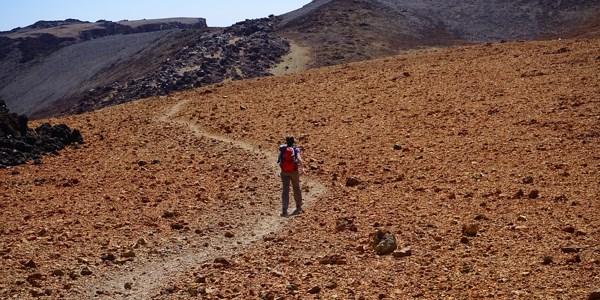 The desert can be a place of transformation, an idea we have been exploring this Lent. But the desire to wander to and through a new landscape can be as instrumental in that transformation as the character of the place itself - ‘the great affair is to move’, as Robert Louis Stevenson wrote. Daniel Kearney reflects on the instinct to pilgrimage that is ‘hard-wired into our very being.’

All of us are pilgrims on this earth; I have even heard people say that the earth itself is a pilgrim in the heavens.[1]

Philip Larkin once wrote, ‘We all hate home/And having to be there’.[2] Not a sentiment shared by all, perhaps, but la grande maladie de l’horreur du domicile, in the words of Baudelaire,[3] is undoubtedly a reality for some. Is this, perhaps, why we wander? To get away, if we are able, from the dull drill of domesticity? For Vaclav Cilek, we wander to find ourselves. He wrote, ‘Once freedom was an obsession for us, and so we roamed without any particular destination in mind; today, freedom is a source of stress and we need to learn who we are and where we belong, and this is why we wander.’[4]

We live now and have our being in a global village; the world has become, if only virtually, a smaller place. Nowhere is inaccessible, and nothing remains hidden or out of bounds for too long. Paradoxically, it feels as if the world is, in every sense, our oyster. Yet still the instinct to wander, to walk through a different landscape, is a source of restlessness within us, probing our conformity with exquisite skill. ‘The great affair is to move’, wrote Robert Louis Stevenson in Travels with a Donkey in the Cévennes, ‘to feel the needs and hitches of life more nearly; to come down off this feather-bed of civilisation, and find the globe granite underfoot and strewn with cutting flints’.

These two existential drivers – Cilek’s search for selfhood and Stevenson’s desire to feel life more keenly – are at the very heart of the resurgence in the phenomenon of pilgrimages. As Robert MacFarlane identified[5], ‘Pilgrimage is a desire to reconnect with landscape and nature, provoked by the increasing dematerialism and disembodiment of virtualised existence’. There might also be a desire to rediscover our spirit of adventure, our willingness to take a risk, which we have lost in our sanitised and safety-obsessed world. When I was a child, climbing trees was a life skill, now it is seen as unruly. We used to play together in the street, now play is virtual and solitary.

Walking recently on the Chemin de Saint Jacques, one of four medieval pilgrimage paths through France leading to the foothills of the Pyrenees and beyond to Santiago de Compestela, I rediscovered the ‘globe granite underfoot’, the childish thrill and fear of climbing trees, and, more significantly, who I am. I discovered the wisdom behind Rowan Williams’ words: ‘Place works on the pilgrim … that’s what pilgrimage is for.’

Before I set off I had read an article about nomads written by the intrepid traveller and walker Bruce Chatwin,[6] and one line had stopped me in my tracks: ‘The best thing is to walk’. Movement is the best cure, he argued, for everything. Moving purposefully, virtuously in another direction, opening oneself up to new experiences and other possibilities. Moving far beyond the precise and tidy futures we, and perhaps others, had planned out for us. And the best way to undertake a pilgrimage is ‘on foot, where one is a man like any other man, with the sky above one, and the road beneath, and the world on every side, and time to see all’.[7]

For me, the reason for the walk had always been about the journey, as much physical as spiritual. I was looking for renewal and reinvention after the end of my teaching career. While it lasted I had had a role, an identity, a label, a job. But I came to understand quickly what Seamus Heaney[8] meant by: ‘You lose more of yourself than you redeem/doing the decent thing’. Now I hesitated to answer when people asked what I did. What did I do? Walk the dogs, up-cycle furniture, ride my bike, write the occasional article for Thinking Faith. I had yet to readjust, if readjusting is what you do, to a different rhythm of life, to moving and being in an alien time zone where calendars were not divided into academic terms or holidays picked out in the broad swathes of a luminous yellow highlighter pen. I was in the place that Bill Bryson described in A Walk In The Woods:

You have no engagements, commitments, obligations, or duties; no special ambitions and only the smallest, least complicated of wants; you exist in a tranquil tedium, serenely beyond the reach of exasperation, ‘far removed from the seats of strife,’ as the early explorer and botanist William Bartram put it. All that is required of you is a willingness to trudge.

I certainly had that.

In ‘The Old Ways; A Journey on Foot’, Robert Macfarlane wrote ‘for pilgrims walking...every footfall is doubled, landing at once on the actual road and also on the path of faith.’ I had a sense of this when we stood on the fourteenth century pilgrims’ bridge at Saint-Chely, with its weathered carving of a medieval pilgrim wrapped in a cloak with the enduring symbols of a staff in one hand and a rosary in the other. I felt the tingle of a nerve in my spine as I contemplated the steps I had taken along my path of faith.

‘You are a stranger and a pilgrim wherever you may be, and you shall have no rest until you are wholly united with Christ’, wrote the mystic Thomas à Kempis. The Letter to the Hebrews (11:13-16) similarly refers to us as ‘strangers’ and ‘pilgrims’ on earth, longing for a heavenly country. Pilgrimage is hard-wired into our very being like a migratory urge because the true pilgrimage is an inward journey, with Christ as the ultimate shrine.

At the base of the statue of Our Lady high above the town of Espalion there was a now familiar sight, the so-called ‘pilgrim cairns’, which are created by pilgrims piling and finely balancing stones and pebbles upon each other. The cairns are often found beside the path, or at the base of the stone and iron crosses that are dotted along the Chemin. At first I tended to ignore them but, after a while, I found myself stopping every so often to place a pebble on a cairn and offer up a prayer.

A habit or a mere superstition, who knows, but this simple, now daily act of balancing a discarded stone on a pile of other stones seeped in to me like a ritual. In truth, it came to be some kind of healing process. Taking time to place a stone on the cairn and not bring the whole thing crashing down was a responsibility, a participation in a collective act of homage with the myriad pilgrims who had gone before me. I felt a sense of community, a fellowship. In some intangible way, I sensed as if I was beginning to reconnect with myself again. I was finding rest for the soul on an ancient path just as the biblical prophet Jeremiah instructed:

Stand at the crossroads, and look,

and ask for the ancient paths,

where the good way lies; and walk in it,

Daniel Kearney is a writer currently completing a book on his experiences on the Chemin de Saint Jacques.

[4] Vaclav Cilek, To Breathe with Birds: A Book of Landscapes (University of Pennsylvania Press, 2015).

Desertification as a spiritual challenge