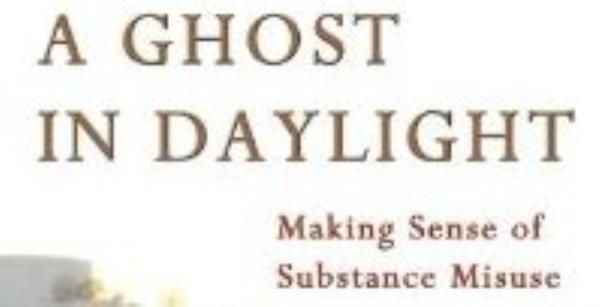 “A Ghost in Daylight” refers to a Junky as written about by William Burroughs on the streets of New York - someone who is physically present on the streets, in our sights and yet also curiously absent from our consciousness. Houlahan uses the metaphor of the ‘ghost on the street’ to explore the pervasive, deep rooted and yet elusive nature of drug use in modern times. The book is clear that it does not set out to inform the reader about drug use from a chemical perspective and instead is focussed primarily on an evolutionary approach to understanding substance use. It sets our current desires for substances within a social, cultural and evolutionary framework and argues that it is these deeply-rooted beliefs and patterns of behaviour that we need to understand and question if we are ever to move onto a more rational and holistic way of understanding drug use.

Through this approach Houlahan covers a wide ranging collection of inter-linking ideas and approaches to understanding substance misuse, using the format of short essays which form the chapters of the book. At times what he suggests seems both straightforward and simplistic and at other moments inextricably entangled and interconnected. Whilst this sometimes makes for a frustrating read, it does serve to reflect the complexities and confusion that surround the exploration of ‘making sense of substance misuse’.

Houlahan develops Bronowki’s ideas of ‘nimble intelligence’ whereby humans take something, manipulate it, elaborate and ultimately expand on it, in order to better meet ‘pleasure needs’. He uses the example of food, where food was simply a way of meeting our human needs for survival. With the advent of fire (nimble intelligence) and the development of cooked food, humans then created a desire for food that went beyond satisfying a hunger need and went on to produce a desire for the pleasure of food. It is this desire for repeated pleasure which, he argues, is inextricably linked to substance misuse. In other words, taking psychoactive substances is a way of filling intimate needs and the repeated taking of these substances is a way for the user to try and recreate the original feel good sensation of the drugs. As De Quincey says, “to taste but once from the tree of knowledge is fatal to the subsequent power of abstinence.”

Houlahan further links this desire for repeated pleasure to the pressure of social groupings, where certain substance use is applauded and upheld as the norm and which is seen as a form of escape from the routine and planned nature of daily life. It is the ability of substances to straddle this gap that permits people, “who are otherwise strongly committed to strategic planning and goal setting [sic] to give free rein to equally dominant modern values - the culture of spontaneity, the culture of risk and adventure and the culture of going with the flow.” (2006:103)

These are stirring words and yet ultimately, where I think the book falls down is in the lack of a sense of rigour and clarity about what constitutes ‘critical awareness.’ Without fully defining this and giving an indication of how this could be used in a practical way to work with clients who have substance misuse issues I found myself feeling increasingly frustrated whilst reading the book. I understood the point of deep connections that Houlahan was making but felt that the book failed to deal adequately with the question he set himself in the first part about whether it is enough to see the deep seated connections and yet not act on them. His implication was that more needed to be done, but at the end of the book I was unclear about how this could happen? What the next steps might be?

In this way I felt ‘The Ghost in Daylight, making sense of substance misuse’ whilst performing like the Ronseal advert, (it does what it says on the tin) failed to deliver a fully resounding satisfaction at the end. I certainly understood more, but yet had little sense of how this ‘making sense’ could translate into action. Although Houlahan himself is careful not to make any claims that the book is a practical handbook, the information on the book jacket implies that there are many suggested practical ideas for counsellors and policy makers, which I did not think was entirely evidenced in the text.

Accumulative and critical reinterpretation of knowledge is a good thing, but in the exploding and practical field of substance misuse it would have been good to have a few more pointers about how his theories could be developed to work in practice.

Find this book on the Veritas web site