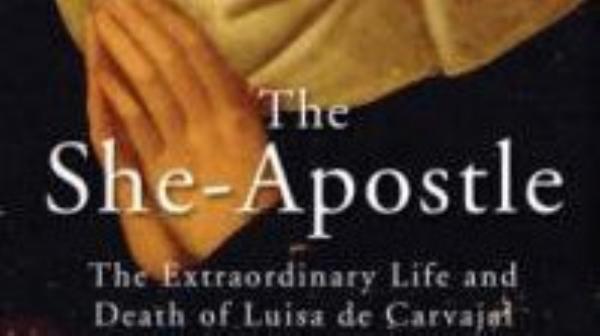 Many of the best stories start in the middle. The story of The She-Apostle begins, with Dickensian vividness, as the dismembered remains of two Catholic priests are conveyed in a carriage by night through the dangerous streets of London, to a small house at the very edge of the city. There, they are received with reverence and relief by an anxious Spanish woman, Doña Luisa de Carvajal, the She-Apostle of the title. This name had been given to her derisively after she covertly travelled England some eight years earlier to support the Jesuit mission and, if possible, die a martyr's death. It was she who had planned and financed the difficult and treasonable task of retrieving the bodies from a deep pit near Tyburn Field, where they had been buried a few days previously. Glyn Redworth then takes his readers back to Luisa's early years and upbringing to examine the influences that brought her from the highest ranks of the Spanish nobility to a life of poverty in London, where nonetheless she exercised a strange authority.

Redworth wears his scholarship lightly. He describes Luisa's childhood: her birth as the adored only daughter in a family of sons; her early orphanhood; her education alongside royal children; and her eventual fostering by an uncle who had such high aspirations for her spiritual growth that he imposed on her the most extreme forms of 'discipline'. On his orders, the young Luisa was regularly flagellated with appalling severity. Redworth raises the possibility of there being an element of unwitting sexual perversion here, but he does not dwell on a reductive modern analysis of motive. Instead, he concentrates on the paradoxical nature of a culture in which obsessive regard for worldly honour and status ran alongside an intense religiosity which nurtured guilt and glorified martyrdom. There is a resonance for us in what might have seemed incomprehensible even a decade or two ago; recent global events have made us aware that there are those for whom self-immolation is the noblest of ends. Redworth does not labour this; the clarity and objectivity of his account allows the reader to see the similarities.

The author skilfully conveys the paranoia and repressions of London in the wake of the Gunpowder Plot. Even within the Catholic community there were tensions between those who sought an accommodation and those who were passionately against compromise. However, it is not all politics: the story that Redworth tells of Jacobean London is worth reading for itself. In order to recount the personal story of Luisa's life, he been able to draw upon many little-known accounts, memoirs and letters. Then, as now, there was a great deal of informal communication – travellers' tales, spiritual memoirs and, of course, letters. After Luisa's death, there was a short-lived attempt to have her canonised and, consequently, there is a well-preserved archive, both by and about her, which was made available to Redworth. He accepts that, apart from its historical interest, much of this writing is of slight literary merit, except for her poetry. Here he makes the grand claim that some of her poems are amongst the finest of the Golden Age.

The fact that she was a woman was a major constraint upon all her projects. When she attempted to found a non-cloistered community, she met the same hostility as other women with similar aims. (Her near contemporary and foundress of the Congregation of Jesus, Mary Ward, who faced similar opposition, has only this January received the public recognition that was her due.) Luisa, however, had staunch allies in the Jesuits, who had a use for her considerable wealth and for her fierce zeal, which they hoped might attract the kind of opposition in England that would sustain anti-Catholic sentiment. The persecution, even martyrdom, of a noble lady would attract useful publicity. Redworth questions the extent to which she was a pawn of the Jesuits, but he presents her as woman with the wit to see through the manipulation and use it for her own ends.

She was a larger-than-life figure, with a tendency to raise a furore wherever she went. Nothing suited her better than a confrontation with a 'heretic'.

She had 'a voice like a sonorous trumpet' and, on one occasion, to her great satisfaction, was hauled off to prison after a vigorous public wrangle in Cheapside. Perhaps it was her position as a valued only daughter, together with what is described as her 'fierce intellect', that had nourished her sense of self and turned her into the strong-minded individualist who overrode all opposition.

The She-Apostle is a book for many different types of readers. Those interested in social history will find it a window into a fascinating period. Feminists will have their darkest convictions reinforced. For those who simply enjoy a good adventure, the tragicomic tale of Doña Luisa holds interest to the end. There is indeed tragedy in the fact that all her brave longings to be a missionary, a martyr and a saint seemed to come to nothing. Yet Redworth, by bringing her so vividly to life, makes her, with all her flaws and bigotries, an admirable figure. She probably did more than she is credited for to sustain and inspire the beleaguered Catholics of London at a time of persecution. The missionary priests are well-recorded, whilst she and similar ardent spirits, like the heroine of Middlemarch, performed ‘unhistoric acts’ and ‘rest in unvisited tombs.’

The reviewer, Oonagh Walker, is a retired teacher of English.