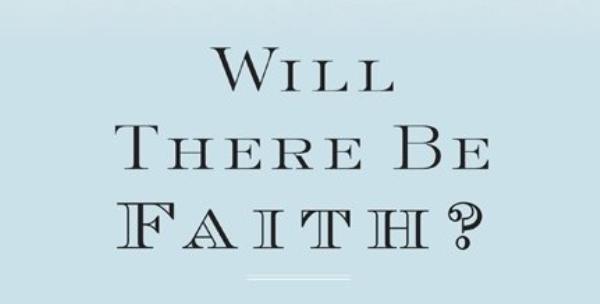 As a Religious Educator of forty years, Will There be Faith? is the third of the three most significant books of my time. In 1985, A. Patrick Purnell wrote Our Faith Story – Its telling and its sharing and in his chapter entitled, ‘Gospel versus Materialism’, he wrote:

The confrontation between the gospel and this world makes itself felt nowhere more acutely than within the life of the school, which continually has to function between an ethic which sets great store on personal achievement as the road to success, and one based on the gospel which speaks of the first being last and the last being first.

We live in a society in which success is measured in monetary terms. There is enormous pressure on a young person to do well at school, to get good results, to get a good job. Inevitably in such a system, exam results are packaged with a price tag. Learning has become a consumer product. High among the qualities parents look for in evaluating a school comes from the school’s place in the league of exam results. Harsh this may sound but parents, like the school, are caught up in a system over which they have little control.

The tragedy of this system for the many who are not successful is failure. Success breeds failure.

If a market culture in education encourages the pursuit of material interests, what becomes of a Catholic school’s prime commitment to religious, spiritual and moral interests? If calculation of personal advantage is necessary for survival in the market, how can Catholic schools remain faithful to values of solidarity and community?

But he is optimistic that it may be possible because,‘Christian culture is aware of the injunction to render to Caesar the things that are Caesar’s and to God the things that are God’s’ and that, ‘with good judgment and critically aware educational leadership Catholic schools in contemporary settings can find a workable synthesis’. He cites the 1997 Bishops’ Conference document, ‘The Common Good in Education’ as counteracting ‘the rising dominance of market culture’ and quotes the document’s emphasis that, ‘Education is about the service of others rather than the service of self.’ (CES, 1997, p.13)

Fifteen years on from this document, Thomas Groome asks again where Catholic education might stand in a secular, postmodern, material world experiencing financial calamity. What are the ‘… deep and universal values that must permeate Catholic education in order to render it truly Catholic’?

While John 10:10 is oft quoted in school mission statements these days, with its emphasis on ‘life to the full’ implying education ofthe whole person, education for is often ignored. Groome does not ignore it and more to the point, education about the common good and justice and peace is central to his cause. He quotes the Synod of Bishops of 1971: ‘Action on behalf of justice and participation in the transformation of the world fully appear to us as a constitutive dimension of the preaching of the Gospel’[1] and adds, ‘So if what we preach and teach does not require and prompt people to do works of justice, we are not representing the gospel of Jesus Christ.’ In a similar vein, Groome emphasises the need for an education in world faiths and an interfaith dialogue.

I am inclined to take the premise of Groome’s title just one step further. Commenting on the verse from which it is taken, Groome says; ‘Jesus’ question reads like a throwaway line or a rhetorical rumination to himself. Taking it at face value, however, it looks as if he really was wondering whether his own mission would endure over time.’ (p.1). But Luke’s is the gospel of the poor and to recognise the two stories between which this verse nestles, the parable of the persistent widow and Jesus blessing the children, is to make it completely relevant. Widow and child are the Biblical symbols of vulnerability and they are at the centre of Jesus’s mission. They represent the poor and the weak, those who depend on and trust in others. Therefore Groome’s question is not so much about whether or not the Son of Man will find faith in terms of religious knowledge and understanding but rather, whether or not he find disciples full of trust, forgiveness and love. Are we teaching our children to be full of trust and forgiveness and love, and in harmonious relationship with God and others?

You may ask how new Groome’s ‘new vision’ is? It is an approach that was available with the Peruvian Catechism of the 1980s but it is revitalised comprehensively here. The book is theoretical, practical and a valuable contribution to Catholic education in this decade, a handbook for everyone involved in Catholic education. In spite of being American and lacking a British context, Groome brings a global perspective. His examples are personal and scriptural and, like always, his exegesis provides practical applications to value. This book is gripping, enlightening and most of all completely relevant for this particular moment of economic and educational change.[2]

The reviewer, John Williams is a Secondary Adviser for Catholic Education for the Diocese of Westminster.

[1] World Synod of Catholic Bishops, Justice in the World (1971) §6.(This Synod document is currently available as a reprint to mark its 40th anniversary from Pax Christi.)

[2] Particularly with the publication of the new ‘Religious Education Curriculum Directory’ for Catholic Schools and Colleges in England and Wales (Catholic Bishops’ Conference, June 2012)

St Henry Morse SJ: ‘A saviour of life unto life’
Alfred Delp: committed to Christ
Ignatius and the Stars
‘The Fight Between Carnival and Lent’
Persepolis