Skip to main content
The Winning of the Carbon War 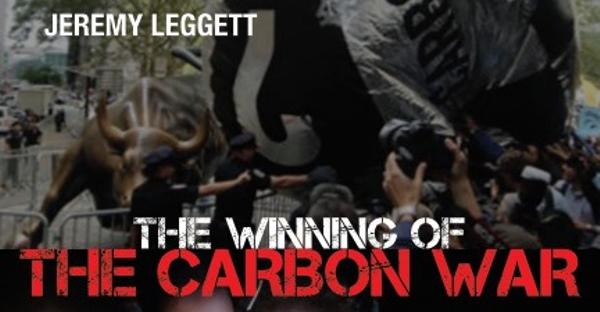 Jeremy Leggett could be called a ‘climate convert’. A geologist who once worked in the oil industry, his metanoia was twofold: he turned against the fossil fuel industry to become an environmental crusader (including some time with Greenpeace) and a social entrepreneur. In the latter role he chairs SolarAid, part-NGO, part-business, which produces subsidised solar lamps for sale in ‘electricity-stressed’ parts of Africa. SolarAid aims to provide an alternative to paraffin lamps for the poor, to reduce the burning of fossil fuels and provide an example of how developing countries can leapfrog the dirty phase of development of the Industrial Revolution. Leggett is also the founding member of Solarcentury, a successful conventional solar energy business, 5% of whose profits go to support SolarAid. Arrangements such as this are Leggett’s attempts to practise what he self-deprecatingly refers to as ‘nicer capitalism’.

It is the role as a climate crusader which bulks largest in this book, a sequel to a previous volume entitled The Carbon War. The Winning of the Carbon War is a highly absorbing read, a personal diary of the time leading up to COP21 in Paris and of the high drama of the conference itself. As Leggett himself admits, his own carbon footprint is considerable as he flits around the globe addressing everything from anti-fracking demonstrators to gatherings of oil bosses. In every paragraph, but without being strident or patronising, he conveys his passionate belief that decarbonisation to save the climate is the most important struggle of our age, and the recent stunned reactions of climate scientists to the string of dire temperature records broken this year only underline how right he is.

Leggett doesn’t use the warfare metaphor lightly. For him this is a crucial struggle, a clash of ideas and of strategy, mostly with the fossil fuel forces and their co-opted politicians who, despite all the scientific warnings, resist the implications for their industries. The pity of the war he describes is that so many are so ignorant of just how critical it is and that some who should know better are still happy to perpetuate that ignorance, to obfuscate, confuse and simply lie.

But it’s the economics of the crisis that Leggett uses to get our attention. The fossil fuel people hope that the low coal, oil and gas prices will rebound and the status quo ante, when energy company bosses were the masters of the universe, will return. According to Leggett this is not going to happen. The prices will fluctuate but he argues that investing in fossil fuels today is ultimately like putting money into canals at the moment the railways were being built.

The other outfit Leggett works for is Carbon Tracker, an NGO which analyses environmental data and their effect on the economy. This group does the analytical heavy-lifting which backs up the view that fossil fuels constitute a massive economic bubble. In my view Carbon Tracker is one of the most influential think tanks that most people have never heard of. Its rigorous and devastating analyses of the economics of old energy systems versus the new ones has made many investment managers sit up, take notice and move out of coal, oil and gas. Some of the levels of debt that oil companies are running up in their search for more shale and tar-sands oil are pretty terrifying. So far, Carbon Tracker’s predictions have been uncannily correct, which has gained it much respect. Even the Governor of the Bank of England, Mark Carney, has listened and voiced disquiet about stranded fossil fuel assets and the potential they have to trigger a major economic meltdown like the 2008 sub-prime disaster. Carbon Tracker is hastening the energy transition.

Leggett and Carbon Tracker are obviously sympathetic towards the fossil fuel disinvestment campaign. However, their main aim is to sound a warning to investors, ordinary pensioners for example, whose future may be tied up in assets which Carbon Tracker analysts believe are well on the way to becoming penny stocks thanks to inevitable government regulation and disruptive clean technology.

While appealing to enlightened economic self-interest, the Carbon Tracker crew also hope that an ethical sense will ultimately prevail and persuade oil companies and power utilities to make what Leggett calls ‘a u-turn’: to admit the error of their past ways and, crucially, transfer their billions into renewable, climate-friendly energy. So far some of the big electricity companies have made the change. Big oil appears to be a harder case, but even here cracks are appearing, especially since the price of oil fell from over $100 per barrel to under $30 and is now back at $50, demonstrating just how volatile it is. The personal drama is particularly powerful here, as Leggett knows many of the oil bosses from his pre-conversion period. There are some awkward encounters and he documents his feelings about these with almost Ignatian self-awareness.

Pope Francis is frequently mentioned and with approval. One chapter heading quotes him – ‘The Dung of the Devil!’ (Translation: unbridled capitalism). Leggett regards Francis as a true leader in this struggle and hopes, perhaps a little naively, that the billion plus Catholics in the world will all throw their support solidly behind their pope. He also notes how Francis’ encyclical, Laudato si’, has encouraged other religious leaders to step into the fray with statements of their own. Some observers were a little disappointed when Francis addressed the US Congress and did not actually use the words ‘climate change’ although it was quite clear that he was talking about it. Leggett regarded this as a wise diplomatic tactic, one calculated to win over the congressional fence-sitters, an analysis which reflects Leggett’s own style. Although this is a kind of civil war, Leggett would prefer it to be won through defections rather than defeats. Hence he does his diplomatic utmost to win over his opponents in the fossil fuel industries to the side working for a zero-carbon world.

This is not always easy, of course, especially when dealing with some of the more unreconstructed men (mostly) in the oil business. Of one character he says implacably, ‘I portrayed him as a “master of propaganda”: an architect of intended sabotage at the climate negotiations so malign as to amount to “a new form of crime against humanity”’. In another place he also refers to ‘the distasteful flat-earth political posturing of the Republican Party’. As for the Cameron government in the UK, as an Englishman from Hastings this seems to be Leggett’s heaviest cross. He is frequently at a loss as to why the Conservatives cannot see the writing on the wall, even when it appears in the form of green articles in The Telegraph and resistance to Cameron’s pro-fracking policies from Tory voters in the Conservative heartland. It seems that Cameron and his cabinet colleagues have acquired an idée fixe about fracking and nothing can dislodge it, even the prospect of dire economic consequences and loss of votes.

The position of the Cameron government illustrates a general observation that Leggett makes, that many national governments are now hopelessly out of touch with ordinary people on this issue. Public opinion has moved remarkably quickly and politicians are struggling to keep up. Fossil fuel lobbyists, especially in the US, have been happy to hold them back. Hence many people have given up on central governments and are forging ahead by themselves. Cities, towns, provinces, organisations, businesses, are often vastly more ambitious in their green targets than central governments and national politicians.

Leggett cautions that some of the dirtiest battles might yet have to be fought against what he calls the ‘high priests of the incumbency’, organisations like ExxonMobil which he thinks might go down fighting and whose bosses are ‘likely to face jail time in their dotage, imposed by a society looking back in anger’.

Leggett’s optimistic conclusion, however, is that, after the watershed moment of Paris with its surprising support for a sub-1.5 degree Celsius warming target , the carbon war can be won and we can be hopeful for the future of humanity.

I found this book to be an exception to the rule that we under-appreciate the things we get for free. It can be downloaded in PDF free of charge at Jeremy Leggett’s website, which also features a video summary and update of The Winning of the Carbon War. The profits from the hard copies go to raise money for SolarAid.