Skip to main content
Photo by Jeff Weese at flickr.com 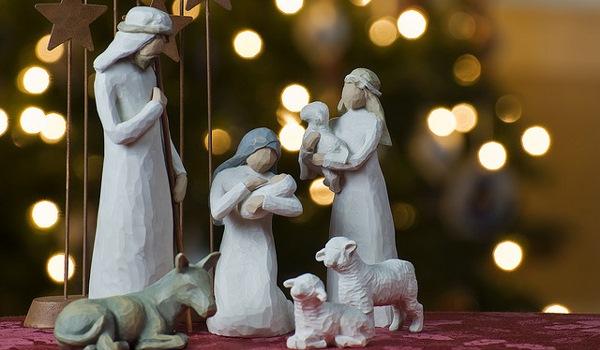 At Midnight Mass on Christmas Eve, we will hear the passage from Isaiah 9 which includes the fascinating series of names whose significance we have been considering during Advent. Nicholas King SJ concludes our series by asking how the titles ‘Wonderful Counsellor, Mighty God, Everlasting Father, Prince of Peace’ informed early Christian thinking about Jesus, and how they can inspire our Christmas prayer.

As the celebration of Christmas rushes towards us, it becomes essential to work out who we think this Jesus really is, whose birth in a stable we are about to commemorate. That was the position in which the first Christians found themselves. They did not, as we sometimes suppose, immediately rush out and write the decrees of the Council of Chalcedon. Instead they did what we must do, and not just at Christmas: they sat down and contemplated the mystery of Jesus. How were they to do that? They were all good Jews, and had a library of texts – what we call the ‘Old Testament’ – about the relationship between God and the people of God, to which they inevitably turned.

One text from this library that will be in our minds and ears over Christmas is from Isaiah 9, which is the First Reading at Midnight Mass. In its original setting, it was probably dealing with the appalling threat presented by the invasion of Israel by Tiglath-Pileser in 732 BC, which could have destroyed both the Northern and the Southern Kingdom – except that God was at work. And so the prophet sings of ‘a great light’ that has been seen by ‘the people that walked in darkness’. Remarkably, it takes the form of a baby that has been born or is to be born, possibly the same baby that his mother ‘will call “Emmanuel”’, at Isaiah 7:14. You can understand therefore why Christians scrutinised this passage for help once they started to think about the all-important fact that Jesus was born, and about the circumstances of that birth. The culmination of the passage is the list of four ‘titles’ or ‘names’ that the prophet bestows on the child who is to be born, and it might be useful to look at these four phrases (‘Wonderful Counsellor’, ‘Mighty God’, ‘Everlasting Father’, ‘Prince of Peace’), and see how they affected early Christian thinking about what had happened in Jesus.

It is thought that all four of these titles owe something to the kind of language used about Egyptian monarchs, and ‘Wonderful Adviser’ (as it could be translated) would remind Jewish readers of what was said about God when Israel was delivered at the Exodus (see Exodus 15:11, for example). When the early Christians reflected on it, however, it took on another meaning, one that deepens the mystery of Jesus. For in John’s Gospel, in the discourse put on Jesus’s lips at the Last Supper, there is a brilliant theological innovation, what Jesus here calls the ‘Paraclete’. This could mean ‘Adviser/Counsellor’ or ‘Counsel for the Defence’. In 1 John 2:1, it refers clearly to Jesus; and at John 14:16 Jesus implies that this is indeed the case, when he says ‘I shall ask the Father, and he will give you another Paraclete’, who is then defined as ‘the Spirit of Truth’.  The next use is at 14:26 where it is described as ‘the Paraclete, the Holy Spirit, which the Father will send in my name’. Do you see how the mystery of Jesus has now been wrapped up in the rich community which is the identity of the one God? It does not matter that we do not understand how this can be so; what matters is to see that it is beyond anything that we can grasp. Then at 15:26 we go deeper into the mystery, when the Paraclete is further described as ‘the Spirit of Truth which comes out from the Father – that one will bear witness about me’. Finally, at John 16:7, the Paraclete is, we learn, the one whom ‘I shall send to you’. So there is an immensely close link between this ‘Counsellor’ and who Jesus is. We might profitably reflect on that as we kneel at the crib this year.

It is not clear what this title meant in its original setting, but it certainly provided an option for how those good Jews who wrote our New Testament might speak about Jesus. The most Jewish of all the gospels is that of Matthew, and one thing that a good Jew simply cannot do is to rush around proclaiming that human beings are God. But see what Matthew does: when Jesus comes to the disciples, walking on the water, he utters a very divine-sounding ‘I am’ (Matthew 14:27), and when he finally gets into the boat (along with the bedraggled Peter), ‘they worshipped him, and said “You are truly the Son of God”.’ Then the other occasion on which Matthew uses the idea that Jesus might be God is at 28:20, the very last words of the gospel, where we hear Jesus tell the baffled eleven who remain of his original group ‘look! I am with you all the days’, which sends the alert reader straight back to Matthew’s opening chapter, and his assertion (1:23) that Emmanuel means ‘God with us’. Matthew’s first hearers will not have missed this point. But is Jesus ‘mighty’? Not in the obvious sense, for he is murdered at the story’s end; God, however, is in charge, and that is enough to be going on with.

This is not, clearly, a title that we can properly apply to Jesus, but it may serve to remind us that in reflecting on all these titles we are being invited deeper into the mystery of who Jesus is, and the mystery of who God is. ‘Fatherhood’ is right at the heart of the matter, especially in Matthew’s Gospel. At Jesus’s baptism (3:17) we hear the voice of God proclaiming ‘this is my beloved Son’, and compare this also with Matthew’s account of the Transfiguration, (17:5). In addition, the ‘fatherhood of God’ is right at the heart of Jesus’s religious experience, and Matthew makes that clear in a very interesting way. Have a look at the Sermon on the Mount (Matthew 5-7), and you will notice that Matthew has put the Lord’s Prayer (‘Our Father…’) right in the middle of the sermon, even rather awkwardly, since it breaks up the pattern that Matthew creates, of doing things in secret, to be noticed only by ‘your heavenly Father’. Once you have seen that, you may also notice that the Lord’s Prayer holds the whole of the rest of the Sermon together. What makes sense of all this teaching is that God can be called ‘Father’, not just by Jesus, but also by those whom Jesus calls ‘brother and sister’. You might also think, of course, of the prayer that in Mark’s Gospel we overhear Jesus making in Gethsemane, to ‘Abba, Father’ (Mark 14:36, and it stuck in the memory of those first Christians, to be quoted at Romans 8:15 and Galatians 4:6). And what about ‘everlasting’? Once again we can go back to the last words of Matthew’s Gospel, ‘all the days, until the close of the age’. All these titles, in their original setting, and in the Christian recycling of them, speak of God’s unfailing fidelity.

This title did not really make it into the New Testament, though you might like to look at the beginning of Hebrews 7. The Letter to the Hebrews is a meditation on the significance of Jesus, and you might call it ‘Jesus – the Real Thing’. Like all those early Christians, the author of Hebrews raided the Old Testament for language to capture the reality of Jesus, and in chapter 7 he fixed, like several of his Jewish contemporaries, on the mysterious figure of Melchisedek, from Genesis 14, and gave him the title of ‘King of Peace’, a kind of forerunner of Jesus himself. The other moment in the New Testament when Jesus is presented as ‘prince of peace’ is at Luke 19:42, where Jesus weeps over Jerusalem. It is important to remember that for Luke, Jerusalem and its Temple are virtually characters in the narrative. Luke’s Gospel begins and ends there, while Acts begins there, and keeps coming back, until the terrible moment at 21:30 when the Temple doors are slammed shut. With that in mind, listen to what Jesus says to the city, through his tears, and just after the crowd’s deceptively enthusiastic welcome as he enters Jerusalem: ‘If only you also had known the things that make for peace – but now it is hidden from your eyes…you did not know the time of your visitation’. This gives profound meaning to our last title, ‘prince of peace’, and serves as a reminder that we shall not understand Christmas unless we understand that the crib is inevitably overshadowed by the Cross.

So there you have it: these four titles do not give us the full story of Jesus, but they point, each of them, to three important elements that must be there in our Christmas praying. First, the mystery of Jesus is beyond anything that we can understand; if you think that you have clearly grasped who Jesus is, then you have not been paying attention. Second, we do not realise the truth about Jesus unless we see that his birth is also the first step on the road to Golgotha. Finally, and this is perhaps the main thing that we learn from the titles we have been considering, we shall not understand Christmas unless we set it in its context as part of the story of God and of the people of God.

He came all so still

The social reality of Christmas

The Christmas story according to Matthew