Skip to main content
Photo by michael_swan at flickr.com 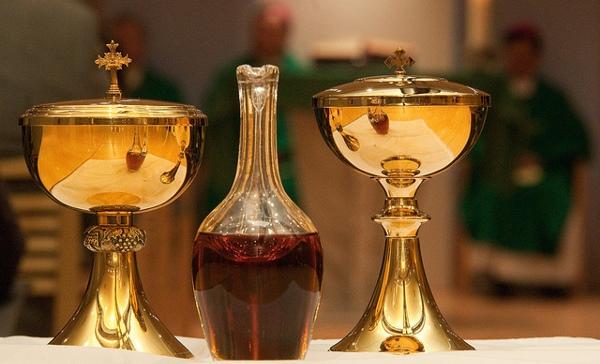 In the bread and wine we have ‘both sign and realisation of a new creation, binding it together and transforming it from within.’ For the feast of Corpus Christi, Fr Harry Elias reflects on the communion with Christ into which we and all of creation are welcomed through the Eucharist.

This is what Paul says about the Last Supper, which he calls the Lord’s Supper:

The Lord’s Supper was for Paul a sharing, a partnership or communion (in Greek: koinonia) with the sacrificial offering of Christ by the eating and drinking of bread and wine, and through Christ with God. Mention is made of three interrelated embodiments of Christ’s self-offering: the body of Christ that was put to death; the bread, taken, blessed and shared; and the many who partake of this bread.

The body of Jesus was seen from the outset as a sacrificial body. In Luke’s Gospel, Simeon takes the baby Jesus in his arms and tells Mary that the child is destined ‘to be a sign that will be opposed’ and that a sword will pierce her soul, too (Luke 2:34-35). Throughout his life Jesus was committed to the will of his Father and gave up his own life for the sake of reconciling and gathering together his people with God. It was through his sacrifice that Jesus received his new, resurrection body and established the new covenant ‘in his blood’ for the forgiveness of sins, a covenant of which the prophet Jeremiah had spoken (Jeremiah 31:31-37). The Passover setting of the Last Supper in Matthew, Mark and Luke was a recalling of the old covenant in which God took Israel as his people after their exodus from slavery in Egypt. That was a covenant of love for a particular people that had to be spread to all others.

At the Last Supper, Christ took bread and wine, blessed them (gave thanks to God for them) and declared the bread and wine to be his own body and blood, his sacrificial body, the embodiment of his sacrificial offering. He then gave them to his disciples to share. Earliest church tradition attests that the bread and wine were not merely a sign of Christ’s sacrificial body but actually were his body: the bread and wine had become a new creation. By becoming Christ’s flesh and blood, their identity was that of the Word of God (John 1:1). In offering the bread and wine, and in their being eaten and drunk, we come to communion (koinonia) with Christ in spirit, and through him with the Father, ‘so that, just as Christ was raised from the dead by the glory of the Father, so we too might walk in newness of life’ (Romans 6:4). Through our faith in Christ handed down to us by the Church, the joy and spiritual strength of hope we receive from the bread of life, the heavenly manna (John 6:50-51), enables us to endure the misfortunes in the wilderness of our lives. The Lord invites each one of us to his supper, to relax, rest and be refreshed in his personal love and in the Father’s love.

The third embodiment of the sacrificial body of Christ mentioned by Paul is the many who ‘are one body’. In baptism, we are born anew (1 Peter 1:23), and in the one Spirit baptised into one body (1 Corinthians 12:13). We are transformed into the likeness of Christ’s sacrificial body and take on his identity, the identity of the Word of God, without losing our innate individuality. ‘I have been crucified with Christ’ says Paul to the Galatians ‘and it is no longer I who live, but it is Christ who lives in me’ (Galatians 2:19-20). Those who are baptised become, Peter says, ‘a chosen race, a royal priesthood’ (1 Peter 2:9). We are asked, ‘by the mercies of God, to present [our] bodies as a living sacrifice, holy and acceptable to God, which is [our] spiritual worship’ (Romans 12:1). As priests in, with and through Christ the High Priest, we can offer our own selves with our works to the Father in order to make atonement and intercession. For Paul, the suffering in his own flesh causes rejoicing as it is ‘completing what is lacking in Christ’s afflictions for the sake of his body, that is the church.’ (Colossians 1:24)

Paul urges us to live a life that is holy not by being ‘conformed to this world’, but by being ‘transformed by the renewing of [our] minds, so that [we] may discern what is the will of God – what is good and acceptable and perfect (Romans 12:2). Having called Christ our Passover, Paul goes on to say: ‘Therefore, let us celebrate the festival [of Christ’s passing over from death to life, the day of his resurrection], not with the old yeast, the yeast of malice and evil, but with the unleavened bread of sincerity and truth’ (1Corinthians 5:8). Holiness includes as well ‘[maintaining] the unity of the Spirit in the bond of peace’, witnessing as one body to the one Lord and the one God (Ephesians 4:3-4). This is why Paul had to warn the Corinthian church that to indulge in any form of boasting which caused divisions was to eat the bread and drink the cup in an unworthy manner, to eat and drink judgment against themselves. We need to ‘examine [ourselves] and only then eat of the bread and drink of the cup’ (1 Corinthians 11:28-29). John’s Gospel, in recounting Jesus washing the feet of the disciples instead of the institution of the Eucharist, brings out the significance of the latter as a mission to serve others in our daily lives.

Through the Incarnation, the body of Christ became inseparable from creation, so that creation is given the hope that ‘it will be set free from its bondage to decay and will obtain the freedom of the glory of the children of God’ (Romans 8:21). The assurance of that hope is the Holy Spirit given to us (Romans 8:15-16). Paul goes on to say: ‘we know that the whole creation has been groaning in labour pains until now; and not only the creation but we ourselves, who have the first fruits of the Spirit, groan inwardly while we wait for adoption, the redemption of our bodies. For in hope we were saved.’(Romans 8:22-24). As stewards of creation, we are the ones who must help to realise creation’s longing. As we come to the altar and offer up ‘the fruits of the earth and the work of our hands’, both are blessed and are transformed into Christ’s sacrificial body in which he, and now we and all creation become an offering to the Father in order to receive freedom in newness of life. In that hope we can continue our struggle for that newness to flourish, for creation to yield the abundance and delight of its food and healing, knowledge, power and wisdom, beauty and wonder, so that it will become transformed finally into the fit environment of our own redeemed bodies – the fresh wineskin for the new wine. The final festivity to come is compared to the wedding feast of a king for his son (Matthew 22:2), with Jesus as the bridegroom and the new creation as his bride (Revelation 21:1-2).

The enactment of the Church’s faith in the common remembrance of the new covenant in Christ’s sacrifice is not just a way of passing on knowledge, or merely a symbol shaping a community. The bread and wine is sacrament – both sign and realisation – of a new creation, binding it together and transforming it from within.

The Letter to the Colossians: Jesus and the Universe