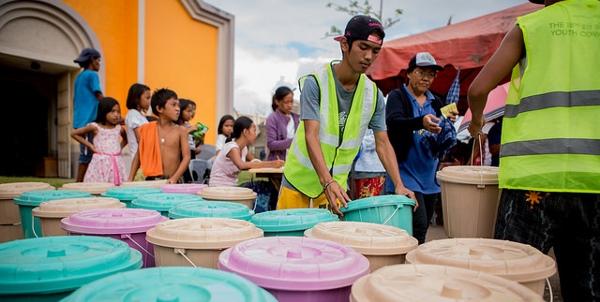 The importance of the work done by local actors in providing humanitarian responses to emergencies and natural disasters cannot be emphasised enough, says Anne Street, but local organisations receive less than 1% of global humanitarian aid money directly. How and why are CAFOD, and other organisations taking part in this week’s World Humanitarian Summit, hoping to address this funding arrangement?

The first ever World Humanitarian Summit has been taking place in Istanbul on 23-24 May. Representatives from the giants of the aid sector – the UN agencies, the Red Cross, and high-profile international aid bodies – have been in attendance, as have faith-based organisations including CAFOD and Christian Aid, and many heads of state.

Less prominent have been the non-governmental organisations (NGOs) in the countries where most aid money is spent. Yet it is these local actors who are first on the scene when there is a natural disaster or emergency. They understand the local culture better than outsiders and their work will carry on when the foreign experts and the television cameras have departed.

An example of the effectiveness of working through local organisations was the response to the recent Ebola crisis in West Africa. It is easy to forget that when the disease first flared up in 2013 there were predictions of a million deaths and fears that it would inevitably spread to Britain and other developed countries. However, the latest World Health Organisation report puts the number of deaths at 11,300. If Ebola has largely been contained, though not completely eradicated, much of the credit is due to the timely action of local workers and volunteers whose work, and the considerable risk they faced, is largely unreported.

The Ebola humanitarian response is a clear example of the changing roles of different actors. International medical experts were vital in bringing their technical expertise, which did not exist in the countries where the outbreak occurred. But it was only really when local faith leaders were trained and mobilised to work with their communities to stop some of the unsafe practices such as the touching and washing of the highly infectious bodies of people who had died of Ebola, that infection rates started to drop and the epidemic begun to come under control.

Britain’s Department for International Development (DfID) provided £5m funding for a ‘safe and dignified burial’ programme carried out by CAFOD, as part of a faith-based consortium, with its local partner Caritas Makeni in Sierra Leone. Thanks to their roots in the community, local workers understood that the biggest enemy was lack of understanding. They were able to dispel myths and help communities protect themselves. They also mediated with the authorities to allow a small number of relatives, accompanied by Christian or Muslim clerics, to witness burials, and graves were marked for later identification. In the early days of the outbreak, after masked health workers seized the dead for burial in mass graves, victims were often buried in secret. This spread the disease to many more people.

The programme was highly successful in reducing the potential death toll from Ebola. It would seem eminently sensible, not to say cost-effective, to give more money to local organisations, but the amount currently channelled directly to them by international humanitarian bodies is astonishingly small: just 0.2% of all humanitarian funding. CAFOD supports Charter4Change, which calls for the proportion to be increased dramatically, to 20% by 2018.

Nobody pretends that this will be easy, and shifting the direction of aid will take time. If such a partnership is to work, local NGOs will need training, reorganisation and an all-round increase in capacity, but the big beasts of the aid world will also need to change. Some big UN agencies pay next to nothing to national NGOs for their running costs. How can you have a truck to take relief supplies to refugees, or transport water pipes or cement or tarpaulins, without sufficient money to service the vehicle or change its tyres? And in many emergencies the internationals start by hiring the best people from local aid bodies, crippling the effectiveness of the latter.

At the moment there is a perverse incentive for international NGOs to get bigger and bigger, to show how their own teams and experts are delivering food and water, building temporary shelters and permanent homes, and providing water systems and sanitation. This captures media attention and raises funds for them to do more and grow even bigger. Missed Again, a recent study of the response to Typhoon Haiyan in the Philippines, showed that local NGOs were the first to help, but were largely shouldered aside when the international organisations arrived. Though the local organisations had the knowledge and skills, what they lacked more than anything else was the access to funding to pay decent salaries to their staff, who were often poached by UN agencies and international NGOs who could pay far higher wages.

In the short term international organisations must dedicate time and money to supporting local organisations to develop and grow. But once that is achieved, local NGOs must be enabled to work without having to answer constantly to a variety of foreign donors, all of whom have their own reporting standards and accounting requirements. Proposals to accomplish this have been put before the Istanbul summit. Those constantly denouncing British aid as a waste of money are unlikely to be satisfied, but it could reduce the kind of quixotic projects dreamt up by international staff which critics have seized upon, such as staging Hamlet in Haiti or breeding rare fish in Madagascar.

Anne Street is Head of Humanitarian Policy at CAFOD.

Tensions between peace and violence

‘Give them something to eat’: The Christian approach to food aid