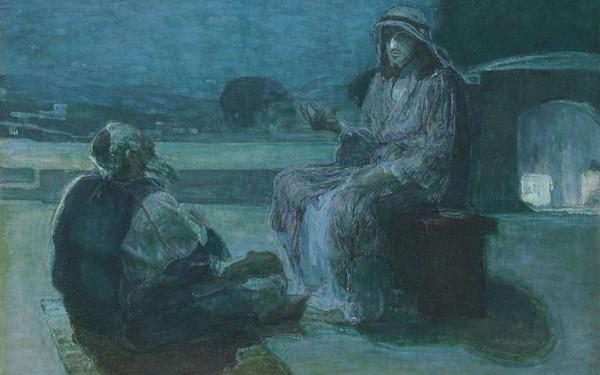 Did you read Tom Shufflebotham SJ’s recent article on prayer for The Way, which you can also find on Thinking Faith? He follows it by pointing us in the direction of some New Testament characters who can be a source of encouragement for anyone who might be questioning whether they have, or still have, faith, or who might feel that prayer has deserted them.

Nicodemus flits in and out of John’s Gospel. It sounds as if he may have come away dispirited from a night-time conversation with Jesus (chapter 3): his embryonic faith had shown up as limited, unadventurous, mean-spirited. When he tries (chapters 7 & 12), timidly but with some dogged courage, to put in a word for Jesus, he gets short shrift from the Pharisees – and, it seems, from the evangelist, too. However, after the crucifixion (chapter 19) he is there, and he brings spices for Jesus’s burial. While all looks to be darkness and defeat, he doesn’t seem to say anything; he just does his corporal work of mercy, and that is no insignificant crumb of faith. And his name will forever be associated with the Jesus Christ who died and rose.

Or take Bartimaeus, the blind beggar of Jericho (Mark 10:46-52). Jesus praises his faith and heals him. But notice the last glimpse we have of him: he ‘followed Jesus along the road’. This road seems to be: (a) wherever Jesus is going; (b) Jerusalem, since Jesus is in fact going there to face the consequences of living a life of such integrity; and (c) as the first Christians had no word for ‘Christianity’, they spoke of ‘this way’, ‘this road’. We can guess that Bartimaeus, knowing nothing about Jesus, Son of David, except that this Jesus had just turned his life around, now follows on the road with that same faith that Jesus had just praised. That we could not pass an exam on our faith does not mean we have a lack of faith: it means we have the foundation of faith. At this stage, all Bartimaeus knows of Christianity is the heart of Christianity – Jesus. But for the moment it is enough for Bartimaeus to ‘have life through his name’. The development of faith and the accurate knowledge will come later.

Or Mary of Magdala. As we find her in John 20, she is standing by the empty tomb looking for a corpse. ‘They have taken my Lord away and I don’t know where they have put him.’ How often these same words seem to describe our flickering experience of faith or prayer. Yet her loyal staying and holding on lead to the joy of recognition, and then she becomes the ‘apostle to the apostles’, carrying the flame of faith to the dying embers in the hearts of ‘the brothers’, Peter and the rest.

Very significant is the experience of the Gaoler in Acts 16. Like us, perhaps, he begins with his securities. He has his job and status; he has his keys and his prisoners; he has his bosses, the magistrates, and from them he has his orders regarding Paul and Silas: ‘Keep a close watch on them. So, following such instructions, he threw them into the inner prison and fastened their feet in the stocks’. To let these Christians escape would be more than his job – or his life – is worth, as the narrative makes clear.

Then suddenly in the middle of the night, an earthquake ‘shook the prison to its foundations. All the doors flew open and the chains fell from all the prisoners.’

Whatever his ‘close watch’ amounted to, it had not been close enough – he had been asleep anyway. ‘He drew his sword and was about to commit suicide, presuming that the prisoners had escaped. But Paul shouted at the top of his voice, “Do yourself no harm; we are all here” He called for lights, then rushed in, threw himself trembling at the feet of Paul and Silas, and escorted them out, saying, “Sirs, what must I do to be saved?”’

This is music to the ears of Paul and Silas. ‘Become a believer in the Lord Jesus, and you will be saved, and your household too.’ Paul once sent a man to sleep – and to his death – with a sermon (Acts 20) and now with relish ‘he preached the word’. After which the Gaoler washed their wounds (in the disciples he was tending the body of the Lord as truly as had Nicodemus) and he and his household were baptised. ‘Afterwards he took them into his house and gave them a meal, and the whole household celebrated their conversion to belief in God.’

In this beautiful account, lived Christianity gleams like a jewel: the conversion; the preaching; the tending of wounds; the baptism; the meal; the celebration. The risen Lord lives among these Philippians. Some years later, Paul would write to them: ‘I believe nothing can happen that will outweigh the supreme advantage of knowing Christ Jesus my Lord. For him I have accepted the loss of everything, and I look on everything as so much rubbish if only I can have Christ and be given a place in him … All I want is to know Christ and the power of his resurrection and to share his sufferings by reproducing the pattern of his death…’ (Philippians 3:8-10). One can imagine how the Gaoler and his family must have thrilled as they listened to the words of their one-time prisoner; and how the Gaoler must have recalled that his life had been so firm and secure, his career assured … until the earthquake turned his values upside down.

The Gaoler’s experience is a paradigm of how faith often develops. He had his securities, but now everything firm seems to crumble. The ground gives way, the structures dissolve and there is confusion in the darkness. Afterwards it becomes apparent that all the crumbling is prelude to the emergence of something far more valuable.

And so it is often with our faith. For many it seems to crumble (perhaps suddenly, perhaps very slowly, almost imperceptibly): it seems as if God has gone missing. But that breaking-up has to happen so that something more profoundly true, more rich and valuable, could emerge from a deeper level. Our faith has changed, or rather it has been transformed, so that it may grow and remain true to itself. And this is because faith is a personal relationship with God, who is infinite and infinitely beyond our grasp … and yet with us: in God we live and move and have our being, as St Paul reminded the Athenians.

Prayer is the expression of our faith relationship with God through Christ. What is true of faith is true of prayer. Prayer must crumble as faith must crumble. This may come through some kind of ‘earthquake’, or it may come over the years in instalments that are barely noticeable. If we communicated with our parents (or anyone else) at the age of 26 or 46 exactly as we did at the age of 6, something would be seriously wrong. It would mean that we had not grown, had not developed.

‘I’m concerned that my faith seems to have gone’. If it had gone, you wouldn’t be concerned about it. ‘But I wish, I really do wish I could pray as I used to.’ If you really wish, then prayer is happening within you (the Holy Spirit is praying within you – see how St Paul puts it in Romans 8). It may not feel like prayer: you are being invited to grow in faith. Try to pray, without fear or worry, and you will be praying. As St Augustine kept insisting, ‘your desire is your prayer’.

Tom Shufflebotham SJ is a Jesuit of the British Province. After teaching in Africa and Britain he worked at Loyola Hall, Liverpool, and more recently was for 21 years on the staff of St Beuno’s Ignatian Spirituality Centre. He now lives in Preston.