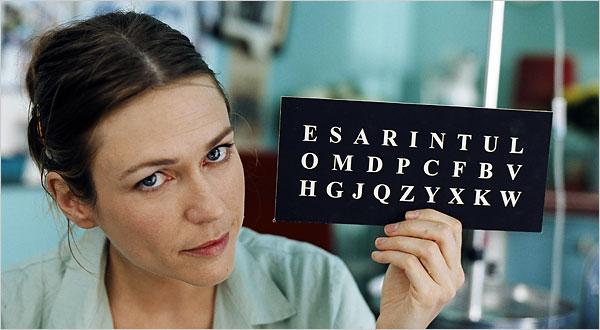 
Imagine that you suddenly wake up in hospital to find that the only thing you can move is your right eye.  You can hear everything, but can’t speak; you can see through that one eye, but the only possible means of communicating is through blinking your eyelid.  This is what happened to Jean-Dominique Bauby, the chic, womanising editor of Elle magazine, who suffered a massive stroke and wakes up to find himself in this condition. Remarkably, he goes on to write his best-selling memoir, The Diving Bell and Butterfly on which the film is based, dictating each letter to a faithful assistant who is following a ‘blinking’ code.

This triumph-over-adversity biopic is engrossing from the opening scene, as the film begins from the right eye’s point-of-view, plunging the viewer into the suffocating horror of “Jean-Do’s” situation.  This horror gives way to self-pity and anger, and eventually redemption as he uses his imagination to transcend the limits of his body, piecing together his memoirs.

The story itself is powerful enough to capture the imagination and make an impressive film, however it is taken to a different level with the wonderful flow of powerful imagery in the hands of director Julian Schnabel and cinematographer Janusz Kaminski (who won Oscars with Schindler’s List and Saving Private Ryan).  Filming mainly from the restricted ‘one-eye’ point of view can be a  risky way to shoot a film, leaving the viewer frustrated with an unwelcome feeling of being too ‘locked in’, but here it  works.  It works mainly because the film gives us plenty of breaks in the form of flashbacks as ‘Jean-Do’ remembers his past in a remarkably unsentimental and candid way.  The visual feast produced by Schnabel and Kaminski is animated by great performances.  Matthieu Amalric as ‘Jean-Do’ somehow can absorb you with his intensity in spite of his paralysis.  Max Von Sydow plays the ageing father of Jean-Do, and seems to be the only person that our patient really cares about.  Surrounded by patient and loving women, all stunningly beautiful – his long-suffering wife, his speech therapist, his physiotherapist, his scribe – a constant theme is the nurturing presence and power of women in spite of Jean-Do’s misogyny.

It may be tempting to think that there is an overkill of worthy films about the heroic  struggles of the physically or mentally afflicted, often succumbing to sentimentality, they make an impression through their earnestness rather than through their craft.  This film bucks the trend, avoiding the clichés of the genre.  It was refreshing to come out of a film having been absorbed from beginning to end and still wonder to myself “Do I actually like the hero?”  The jury is still out on that one, but other juries have already cast their verdict…. a triumph at Cannes, nominated for four Oscars… can you afford to miss it?

The Diving Bell and the Butterfly trailer released

A Short History of Lent