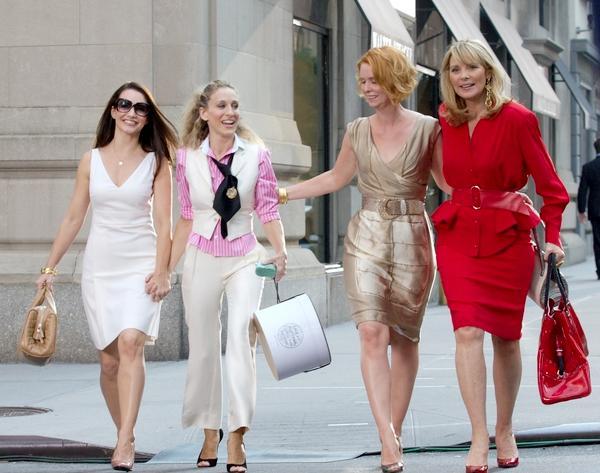 
While the males have Indiana Jones, there is without a doubt only one film on the lips of any female this summer. Yes, that’s right, Sex and the City has landed.

With enough hype to outshine even the latest Spielberg/Lucas collaboration, there is no question as to whether or not Carrie and Co will make megabucks for cinemas across the land. But that still doesn’t answer the question…soulless cash-in or a loving farewell to our favourite New York ladies?

Picking up four years from when we last saw them, it appears that Carrie, Samantha, Charlotte and Miranda really did all find their own happy endings. Having given up her single girl column for settled bliss with her very own Mr Big, our heroine now makes her living as a novelist and Vogue writer. Charlotte is still residing in her Park Avenue paradise alongside husband Harry with the addition of longed-for, adopted daughter Lily, while tough-talking lawyer Miranda lives with her family over the bridge in Brooklyn. Even the perennially single Samantha appears to have found love in the arms of actor, Smith Jerrard.

But as the film proves, the fairy tales may have had it wrong.  We see the four friends question their lives and choices as they encounter problems ranging from the small, “are 76 guests at a wedding an odd amount?” to the rather bigger, “is it wrong to love oneself more than your partner?”

As is the problem with any TV-show-turned-movie, the challenge is taking the essence of Sex and the City and turning it into something different for the big screen, while still retaining what everyone loved about the small screen series. And at this the writers succeeded. The clever addition of several new characters adds fresh faces to a sea of familiar ones. There is also more material to work with now: the four have different issues and are in more complex situations than the ones facing them on the show. We see deeper into their characters than ever before as they deal with their own personal struggles with life and you will leave the cinema feeling as though you know each one a little better.

However, almost in contrast to this, the side of the girls we already know is caricatured, slightly too much. Charlotte is pro-marriage to the level of the ridiculous; Miranda is more no-nonsense than ever before and Carrie’s cute little quirks verge on the annoying.

The other difficulty faced by the writers is how to create problems for the film to work around, and this does lead to several scenarios that do not quite ring true. After all they have been through together, could Mr Big still have doubts over his feelings for Carrie?  Would Miranda really throw away her family’s happiness over one mistake?

But these are just minor issues. The true essence of Sex and the City – more than the all the man-drama, more than New York City and more than the (still fantastic and plentiful) costumes – is the enduring friendship between four women facing the ups and downs of the adult world.  And it is this that the film gets perfectly right. Whatever life may throw at you, there is nothing more important in life than friendship. Cheesy it may be, but for the ultimate fun, heart-warming ride, nothing will beat it.  And for this, the film is certainly worth the hype.

The scandal of extortion