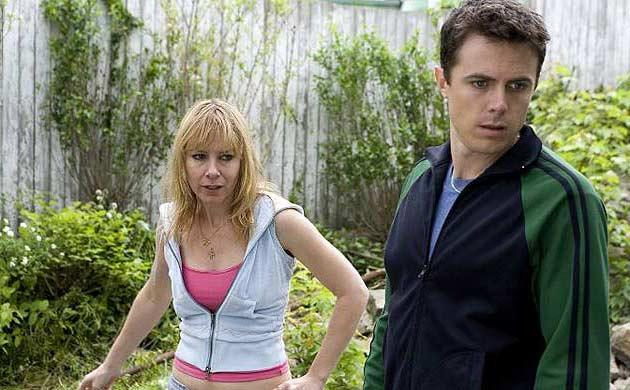 
Gone Baby Gone is best viewed as a series of moral conundrums: characterisation and plot are both distorted to confront the audience with serious ethical questions. After the extending opening establishes the working class location and a mumbled monologue has signalled the key themes of community and connectivity, Ben Affleck’s directorial debut settles into a downbeat meditation on the challenges for a righteous man.

An adaptation of Dennis Lehane’s novel, Gone Baby Gone weaves through an underclass of drug-dealers, murderers, alcoholics and paedophiles. The main narrative concerns the abduction of a young girl: Patrick Kenzie (Casey Affleck) is a private investigator called in by the family. Uncovering connections between the girl’s mother and a local drug-dealer, Kenzie and his partner Angie (Michelle Monaghan) team up with the police task force, only to cause the girl’s apparent death. The action then lurches from one ugly interlude to another, as Kenzie discovers that good intentions are often excuses for self-interest and corruption.

Ben Affleck’s script suffers from weak characterisation: the villains are stereotypes and the antagonists deliberately inconsistent, since the drama depends on sudden shifts in perspective. The story is stretched beyond credibility: again, this is necessary for the film to sustain its moral impact. Fortunately, the idiosyncratic Boston dialect, excellent performances from Casey Affleck, Ed Harris and the ever-gentlemanly Morgan Freeman, along with some gritty cinematography, all combine to hold the attention: the more thoughtful scenes, which could easily have descended into static debates, are contrasted with sudden bursts of well-managed violence.

Patrick Kenzie is the film’s moral centre: determined to do right, he is capable of sudden violence and barely walks on the right side of the law. He subscribes to a dogmatic morality that sets him against the police, a well-intentioned Freeman and, eventually, his lover. The gradual revelation of deeper corruption is handled sensitively: even by the end of the film, it isn’t clear whether Kenzie has done the right thing, his life effectively ruined by his decisions. Ed Harris and Morgan Freeman- the latter subverting his grandfatherly persona- are not only, by turns, his allies and opponents: they represent an alternative morality that is attractive and pragmatic.

It is the strength of this film that it refuses to offer easy answers or a happy ending, but encourages the audience to engage with the issues: despite the heavy adult themes, it never titillates or sensationalises. The moral debates have the intensity of classical drama, as ideas about justice and sin are translated into a vivid Boston vernacular. And doing the right thing is never presented as easy, certain or final: the last scene casts doubt on Kenzie’s behaviour and demonstrates the high cost of his absolutism.

This makes Gone Baby Gone a distinctive, provocative film: rather than relying on spectacle, it invites the viewer to discernment. Affleck’s previous script- the popular and undemanding Good Will Hunting- played out childish fantasies. Gone Baby Gone transforms his weaknesses as a writer- poor characterisation and unrealistic plotting - into tools that intensify the atmosphere and purpose of a police procedural drama that escapes the usual clichés. Visually engaging, it has a breadth of reasonability and a depth of intelligence, and more than deserves the critical plaudits.