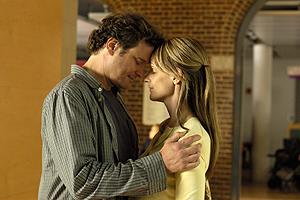 
Helen Hunt’s directorial debut sells itself as a romantic comedy, but in spite of bravura performance from Bette Midler comes up short on the laughs. It plays so loosely with the genre’s conventions that it is almost disappointing that the lovers resolve their problems and create their happy post-modern family: the conclusion undercuts much of the film’s disturbing emotional honesty and grafts a sentimental resolution onto a surprisingly acidic depiction of love and heart-break.

The couple at the centre of the film- April (Hunt) and Frank (signifier-of-romance Colin Firth) - are both clearly damaged by their recent break-ups and their jerky, doubt-filled relationship contains as much desperation as passion. Despite the montage and protestations of April, their affair looks like nothing so much as a rebound, two badly hurt individuals clinging to each other and trying to cope with the difficulties that their character flaws bring upon them. Bette Midler as April’s birth mother is manipulative and vulnerable, insecure and brash, bringing a cynical perspective to the couple’s passions and desperately trying to do the right thing, even though she admits her lack of any moral compass.  The plot emerges from the unflinching characterisation and as a study of human fallibility it is remarkable.

Even more remarkable is April’s ongoing relationship with God and her Jewish faith.  The familiar myth that the Judeo-Christian tradition is a monolithic moral and spiritual entity is sharply undermined by April’s very specific Judaism. The film is littered with rituals and prayers, and the final resolution sees April accepting both herself and a deeper understanding of God’s nature.  April’s journey, which begins with a traditional Jewish wedding and ends in a multi-cultural modern family of races, faiths and adoptions, is illuminated by Jewish folk tales and observances. She argues with God in a manner that is far more common in the Old than the New Testament.

The film stands on the strength of April and Frank’s chemistry. They are uncertain, angry, carrying baggage and frightened both of intimacy and absence. The early exchanges are tentative, fiery, but their love moves far too rapidly to the sort of eternal romanticism that exists only in stupid rom-coms. It is only the conventions of the genre that make this desirable or even acceptable. The subversion of those conventions is what makes the film an unexpected treat, and Hunt is on shaky ground when she forces the finale.

A strong script, a willingness to present both physical and emotional imperfection on screen, a few laughs from Midler and a complex portrayal of human relationships: Hunt has made a movie that engages with mature issues in a thoughtful way. There are missteps. Salman Rushdie makes a bizarre appearance as a doctor and Matthew Broderick,  as April’s immature husband, is such a stereotype that it is incredible that anyone would marry him. And the ending is almost a betrayal of the film’s integrity. April and Frank are obviously together for the wrong reasons, and even a speech cribbed from The Eternal Sunshine of the Spotless Mind cannot short-cut the obvious time and attention that their relationship would need.