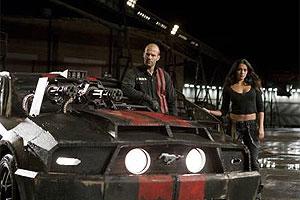 
"In 2012 the economy collapses..." reads the opening frame of Death Race. Therefore, given the current state of global finances we must take this film as a dramatic pre-construction, facts from the future, and so let me tell you all about the inevitable. Our markets will collapse, unemployment will reign, crime will escalate, prisons will be privatised and within one of these prisons there will be a three-stage race to the death with armoured cars driven by psychopathic inmates which will be broadcast on a pay-per-view basis via the internet, $99 for each stage or $250 for all three. Ok, maybe this isn't the prophecy I thought it was. Maybe this is just a ludicrous Hollywood action film. But it's a pretty good Hollywood action film.

Jason Statham stars as Jenson Aimes, a former racing driver who is framed for his wife's murder so that Hennessy, a ratings-hungry prison warden can have him take the place of Frankenstein, the viewers' favourite driver who was killed in the last race. The swapideedoo is made easy by the fact that Frankenstein 1.0 was so badly disfigured by his frequent crashes that he wore a mask. And because winning five races earns a driver their freedom and because Frank had already won four, all that needs to be done now is for Jensen to win.

Some of you might recognise the premise as The Running Man meets Wacky Races. It is, but it is also a vague remake of Death Race 2000, the 1975 cult film that had a similar dystopian setting and gladiatorial motor racing. That film was made by Roger Corman, the so-called "King of the B-movie" for his prolific output of exploitation movies. Death Race 2000 was the epitome of an exploitation movie. Its race took place from one side of America to the other, the drivers were normal citizens and they had to kill other citizens as the highest kill count won the race, not the first across the line. In this Hollywood remake there are all sorts of qualifiers: the lead character is an innocent man, the race is set in prison, and only convicted criminals participate. But that's not to say this film is morally superior. We're encouraged to enjoy the vicarious thrill of Jensen's murderous revenge. We're supposed to giggle at the hubris of a driver who survives a massive crash only to be run over moments later while boasting of his indestructibility. And most notably, when one character smugly explains the presence of sexy women in the passenger seat as being "all about ratings, fast cars, pretty women," the line is delivered without a hint of awareness that this film is guilty of the exact same exploitation. At least the 1970s version was honest about its manipulations.

Nonetheless, Death Race is pretty good at what it sets out to do. The script is tight, the one-liners are terrible, the action set-pieces are well-paced and thrilling and the whole thing rushes by very smoothly. In fact it’s like watching someone else play a computer game. Each race stage/game level has its puzzles, baddies and end-of-level boss. The second level, for example, culminates with a super-armoured juggernaut that is decorated with manned gun turrets, has its own soundtrack and runs on testosterone.

So if it’s fast cars, big guns, pretty girls, gratuitous violence, and the uncomplicated, rasping tones of Jason Statham that you are after...  Death Race.

Bishop Herbert Vaughan and the Jesuits: Education and Authority