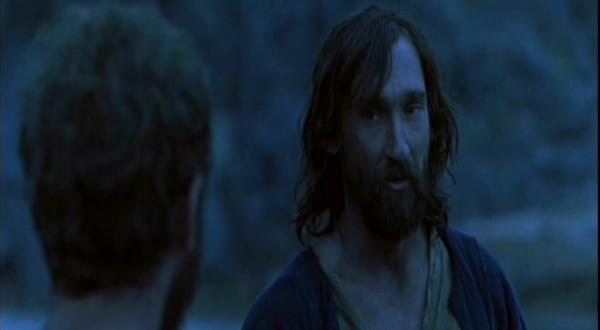 After seeing the second part of BBC1’s The Passion, Michael Kirwan reflects on what is shaping up to be a Passion carefully tailored for our times – a politico-religious thriller with intensely personal drama.

For the record, Joseph Mawle’s is not (yet) my favourite on-screen portrayal of Christ. It will take a lot to dislodge the haunting intensity of Enrique Irazoqui in Pasolini’s Gospel According to Matthew, or even Lothaire Bluteau in Jesus of Montreal, and I don’t think Mawle’s face has that kind of iconic power. Does this matter? The BBC’s excellent (so far) Passion is not a definitive version of the gospel story, because no such version can exist: not in the way that cinema has its definitive version of the life of Gandhi, or of Lord of the Rings. As we are at last beginning to realise, each generation discovers the gospel story anew, seeing the face of God but also finding its own concerns reflected back. And what is required from the BBC Passion in 2008 is a retelling of the gospel narrative for a post 9/11, post-Life of Brian audience.

The first of these could so easily have been overstated, but thankfully is not. We have a feverishly unstable puppet state in the Middle East, whose anxious colonial administrators seek out insurgents and puzzle over local religious sensitivities. Add to this, a potentially explosive pilgrimage festival: have we ever been more attuned than we are today to the political ‘background noise’ of the passion narrative? The disgruntled Irish and north of England accents somehow bolster the familiarity as well as the strangeness of this landscape, reminiscent of the medieval mystery plays.

A politico-religious thriller, then, but the drama is intensely personal. It is entirely plausible that Caiaphas, fearing for the Jewish state if enthusiasm for Jesus gets out of hand, should be especially on edge because his wife is in an advanced stage of pregnancy. Jesus and his disciples, including Judas and his mother Mary, are all allowed to wrestle with the destiny towards which events are hurtling, but which they must still embrace for themselves.

Given this strong interweaving of personal and political themes, the roles of Pontius Pilate, Judas Iscariot, and High Priest Caiaphas are pivotal. The respective actors (James Nesbitt, Paul Nicholls, Ben Daniels) seem to be rising to the challenge. Almost a ‘character’ in itself is the role of money: more specifically, what Marxists would call the ‘commodification’ of the sacred, the idea that what is holy can somehow be bought and sold. In the opening scene of Part 1, Jesus buys the donkey on which he will take a highly symbolic ride into Jerusalem – only to give it away afterwards, just as he lets a dove fly free which was intended for sacrifice. There are the familiar set-pieces around this: payment of taxes to Caesar, the upsetting of the merchants’ tables in the Temple, Judas and his paymasters – but the theme is emphatically reinforced by a scene in which Pilate rents out the ceremonial robes of the High Priest to celebrate Passover, in exchange for a coffer full of taxed silver. Why does Caiaphas tolerate this humiliating exchange? Because it is the price of the Roman ‘peace’ which everyone desires so much.

Hence the subversiveness of Jesus’ declared intention to overturn this mercantile debasement of the holy. He reproaches an anxious Matthew for still thinking like a tax-collector: ‘we are not here to barter’. Asked if he believes in sacrifice, Jesus answers yes – but a different kind of sacrifice (many centuries later, of course, Christian theologians will speak of Jesus’ self-gift as a ‘marvellous exchange’). Jesus’ refusal to barter is a threat both to Jerusalem’s lucrative pilgrimage industry and its political accomodation with Rome.

The ‘humanity’ which most critics have commented on is a definite hallmark of this finely-acted production. This is also why The Passion might be a fine riposte, thirty years on, to Monty Python’s infamous contribution to Jesus cinematography. The BBC production bravely echoes The Life of Brian in a few scenes, in its thuggish Roman soldiers and disgruntled Judaean subversives. The gamble pays off; we sense that the gospel story, well told, does a much better job than the Python crew. Jesus’ withering excoriations of the Temple authorities are of course devastating. His steady, powerfully compassionate focus on political and religious cruelty and its ‘unclean’ victims – children, the disabled, prostitutes – takes us where, for all its satirical power, The Life of Brian ("crucifixion’s a doddle") cannot even think about going.

I have a few cavils: a rather pious clunkiness to much of the dialogue, though this is worth it for the gems of insight and humour which are also in there. And one might ask whether the prostitutes in all the Jesus films have to be quite so ravishing. More seriously, there is a clear avoidance of Jesus as worker of signs and wonders, apart from his prediction that he will rise again after his death. This may be understandable given the wide audience the BBC is trying to reach, but it succumbs to an impoverished view of Jesus’ miraculous signs: detachable from his authority and message, dispensible for a sceptical age. As a result the dramatic possibilities of, for example, the healing of the man born blind or the raising of Lazarus have been censored out. Nevertheless, on the evidence of the first two parts of The Passion, here is a thoughtful and well-crafted exploration of the gospel story, fully deserving the accolades it has received so far.

Michael Kirwan SJ is Head of Theology at Heythrop College, University of London.  He is the author of Discovering Girard (Cowley, 2005).

Watch this episode on BBC iPlayer (available until 24 March)

Faith before the flood: The Ark

The Passion, Part One: 'An Almost Unanswerable Question'

The Passion, Part Three: 'The Faces Mirror Our Own'