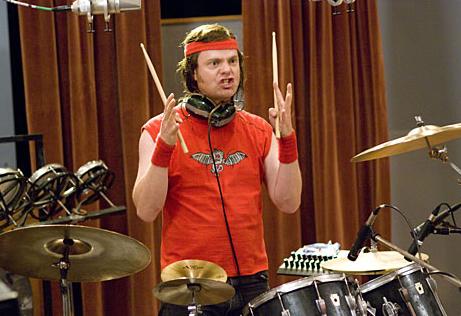 
You know what you're getting with this one. An aging, immature nearly man gets a second chance at rock and roll success which puts to rest the ghosts of his youth and allows him to grow up. Although these formulaic genre films can sometimes be entertaining (School of Rock for instance!) The Rocker is a waste of time.

Rainn Wilson plays Robert 'Fish' Fishman, a drummer who got unfairly kicked out of 1980s poodle rockers Vesuvius just before they were signed. Twenty years later Vesuvius are rock legends and Fish answers phones for a living. He gets sacked, moves in with his sister and ends up playing with his nephew's band A.D.D. Then they get famous and yeah yeah yeah.

It shouldn't be so bad, its cast and crew is a veritable list of accomplished talent. Writers Wallace Wolodarsky and Maya Forbes cut their teeth on The Simpsons and The Larry Sanders Show.  Director Peter Cattaneo proved himself with The Full Monty. The cast is handpicked from the some of the best sitcoms around: Jeff Garlin from Curb Your Enthusiasm, Will Arnett from Arrested Development, Jane Krakowski from 30 Rock, Christina Applegate from Married With Children, and finally Rainn Wilson from The Office (US).

It may have been over ten years since The Full Monty but director Peter Cattaneo has only made two other films, both indies, and this lack of experience must be the reason that The Rocker is so confused in its tone. It's never sure if it wants to send up or celebrate rock and roll and doesn't come close to either goal. The redemption of Fish is an inevitability yet the romance between Fish and Kim, the mother of A.D.D. front man is sidelined to make room for needless exposition -doesn't Cattaneo realise that such a paper-thin premise doesn't need to be explained so much?

As for the cast, they don't do much. Wilson works hard but can't save it. The charisma of the other stars is non-existent to the point that they might as well be anonymous, but it's only through the good will these actors have earned in previous work that this film is tolerated at all. Fish’s nephew Matt is played by newcomer Josh Gad. He’s a soft-hearted fat boy with curly hair just like Knocked Up’s Seth Rogen, Superbad's Jonah Hill, and that kid out of Drillbit Taylor. They must be cloning these guys. Hollywood hasn’t seen a bunch of weirdly similar people like this since the Baldwin brothers came to Tinseltown.

For many people in the UK, this will be their first encounter with Rainn Wilson. In America, Wilson has become a big name TV star thanks to a memorable guest turn in Six Feet Under and through his role as Dwight Schrute in the highly acclaimed American version of The Office. The Rocker was clearly meant to be a vehicle to launch Rainn Wilson’s movie career but the question now is whether it will scupper it?

Care in the Community

Why would anyone want to be a Jesuit today? The wisdom and example of Peter Canisius
The renewal of religious life and Fratelli tutti: Reading Fratelli tutti for religious
Finding freedom with St Ignatius
Spiritual and Religious: The Benefits of Being Both
My Own Personal Ignatius