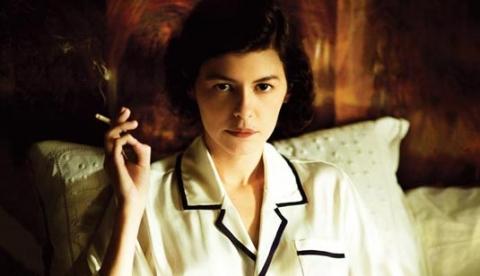 The fashion industry is just about appearances: vain, shallow, and deluded in believing in its own importance. We’ve heard this critique before in films like Zoolander, The Devil Wears Prada and this summer’s controversial comedy, Bruno.  The claim that ‘fashion is an art’ is often the affectation of fashionistas so ridiculous that they seem unreal, and as such is ridiculed as pretentious to form a running joke in such films. In Coco Before Chanel, we have a film that takes fashion seriously. It frames the story of a young woman who becomes both artist and entrepreneur, and uses fashion as a weapon in her struggle for financial and personal freedom.

Coco Before Chanel is a rare kind of film. While the making of ‘great men’ is a familiar theme in our cinemas (think Ghandi, Ali, W.), to have a woman – at least one who is not a queen – as the protagonist in such a biopic is less common. However, as with any ‘great man’ film, it can only be as good as its lead performance.

Audrey Tatou has a big obstacle to overcome. In Britain, at least, she is lovingly remembered as the Parisian hopeless romantic in the title role of Amelie. However, she undergoes a spectacular transformation to become the witty, tough and cynical Coco. Yet both characters are dreamers, and Tatou brings this character trait to both roles in a similar way with her huge, deep black eyes. The way she acts with her features is extraordinary: with the same smile she can portray in one scene, happiness, and in another, tortured façade. She seems able to manipulate every line of her face to portray the complicated Coco.

Coco begins with Coco née Gabrielle Chanel (though her surname is cleverly rarely mentioned) being taken to a convent orphanage. Despite the early appearance of the nuns, there is no mention of religion in the rest of the film, which is a shame; when examining a character’s motivation and direction, surely an exploration of the religious dimension of their development would be fascinating, even if the character disregards it. Growing up in a bleak-looking convent would surely have had some effect on Coco. One can only guess that her desire for fame on the cabaret stage was in some way a rebellion against a morally rigid upbringing, but this is never suggested. Instead, the film goes down the familiar route of saying that it was all because Coco missed her daddy and needed some attention.

So Coco seeks fame by pursuing a rather cheesy song-and-dance act with her sister. While performing, she catches the eye of playboy Ettiene Balsan (Benoit Poelvoorde). He is not handsome, but charming, funny and, most importantly, rich. Coco then immerses herself in exploiting the lovable oaf, and he seems happy to be taken advantage of, so long as he is allowed to take advantage of her, not just as a concubine but also as a ‘geisha’ to entertain his guests.

Primarily, the story of Coco’s early life centres on her love triangle with Balsan and his suave British friend and business partner, Arthur ‘Boy’ Capel. There are few more clichéd plot lines, but the ingenuity of this film is that, for the most part, the real feelings of the men lie hidden not only from Coco but also from the audience, and so we feel the angst of Coco’s tortuous risk-taking with her.

Ultimately, however, Coco’s love story does for her what a love story should do: it allows her to be herself. Coco-in-love transforms herself from the exploited exploiter into an independent woman. And this is when fashion comes back into the picture. Coco uses her clothes as an expression of who she really is. She rejects the soft, fluffy fashions, and opts for a stronger, androgynous, original look. As she becomes more confident as a person, her clothes represent her more truly. For Coco, fashion was not about following a trend, but was a manifestation of her individuality and the ambiguity of her interior life. Eventually, her style becomes her fortune, the source of her success.

But the film left me with a question: what kind of greatness did Coco really achieve? Wealth, fame and power, yes – but did she give up too much on the way to achieving what she believed she wanted? The movie is non-judgmental about the morality of her actions, including concubinage and adultery. It takes the familiar stance that while wives are for economics, mistresses are for love, and honours the latter role as if being a mistress was a part of who Coco was meant to be. Complex moral problems are too easily dealt with and are accompanied by an accepting nod (‘she is what she is’). Tatou’s dazzling performance is a sight to behold, but the darker questions that her story probes are left unexplored. Instead, the film showcases the pretty highlights of the love and glamour, without developing the shadows that would have given the portrait of Coco real depth.

Barbara Ward: Her Life and Letters