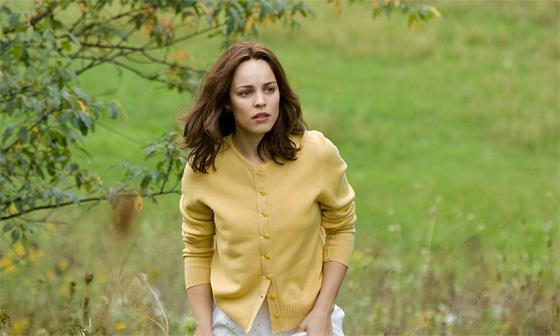 
The Time Traveller’s Wife, an adaptation of the recent and successful novel by Audrey Niffenegger, is a romantic, love-triumphs-over-all tale. Clare Abshire first meets Henry DeTamble (Eric Bana) when, as a child, she is playing in the meadows of her wealthy parents’ estate. Most children have fairies or dwarfs at the bottom of their garden; Clare has a reluctant time-traveller, a man who appears at random moments with no clothes. On their first meeting, he calls to her from the woods to ask for her picnic blanket, and from then on she leaves some of her father’s clothes for him, piled neatly on a tree stump. Over many years (at least for her), the two strike up a friendship. When Clare turns eighteen Henry stops visiting her there, but she spends the next few years at art college, waiting for Henry to appear again and for their romance to blossom. During this time, Henry is unwillingly pulled from one time to another, jumping throughout his own lifetime, often re-visiting the first occasion when he time-travelled, when his mother was tragically killed in a road accident. Frustratingly – and typically for time-travelling stories – no matter how many times Henry travels back to that time, he can never change the pattern of events.

Eventually, the couple, desiring a future and a child together, decide to investigate further what is causing Henry’s ‘condition’. They approach a geneticist, Dr Kendrick (Stephen Tobolowsky), who scans Henry’s brain and discovers, rather unremarkably, that it creates a high level of electrical activity when Henry travels – much more than that no one ever comes to understand!

Much of the film is set in dark, colourless tones: most of the rooms used are dull, dirty and timeless, sometimes making it difficult to place the time period the story has taken us to, but also marking the sadness of Clare (Rachel McAdams) and Henry’s lives, the constant loss, bereavement and unpredictability. Henry’s time travelling is marked by crime: he has to steal clothes whenever he arrives in a new time and he gets beaten up, arrested and at one point has an accident leaving him in a wheelchair. Some of these moments are related with a little light-heartedness and comedy, but after a while the clothes hunting becomes a pointless and superficial distraction from the impact of the time travelling itself.

Severely lacking in the film, however, is any discussion of the concept of time, how it can be understood, or the mystery of how or by whom it is ordered. Viewing the film from the perspective of faith, questions are raised about how our life’s journey is formed or fixed. Henry cannot prevent certain events from happening, which naturally leads the viewer to question whether the events in life occur as a result of our own choices, or of God’s. This issue is touched upon, albeit briefly, when Henry asks Clare to marry him: she says ‘no’, but goes on to say she was just testing out her own free will, and then of course agrees to marry him. Several characters in the film know of Henry’s travelling, all of whom naturally keep it a secret, but strangely they fail to have any real discussion about it. When Clare is challenged by a long-time friend about how she can maintain this kind of relationship, she says simply: ‘It’s a problem’. It seems that knowledge of what is going on has the effect of making people complacent rather than enquiring.

If you are happy to view the film as an easy-to-watch, romantic tear-jerker, and can put aside any frustration at the missed opportunities for something deeper, The Time Traveller’s Wife is certainly worth watching. The performances are moving; some of the minor characters, particularly Arliss Howard as Henry’s father, give outstanding performances.