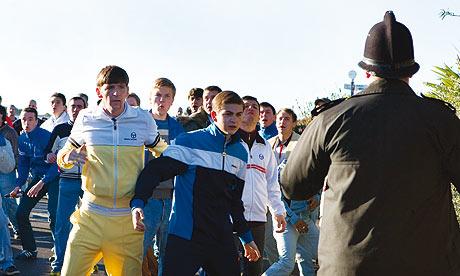 
Set in the early 1980’s, Nick Love’s film The Firm looks at rival factions or “firms” of football hooligans. The plot, featuring a disillusioned young man, Dominic, who is seduced by the virile romanticism of the alpha male gang leader Bex (Paul Anderson) is slightly clichéd and formulaic. Dominic (Calum McNab) ticks all the boxes of disenfranchised youth; Working Class, No prospects, Fed up, No identity. I’m surprised Love hasn’t chucked in an absent father figure for good measure. In fact Dominic’s parents (Eddie Webber and Camille Coduri) are comedic refreshment to an otherwise predictable set of characters. Their good natured jibes – such as comparing their son to a “post box” when he dons a red Fila tracksuit to fit in with the others at the West Ham firm are amusing – a personal highlight of the film.

Whilst adding a fashionable and stylish string to the film’s otherwise flimsy bow, clothes are an important part of what it means to be in a gang or any organized group itself. On first glance it seems that the clothes just add to the whole style-over-substance aspect of the film. Dominic sheds his scruffy jeans-and-jumper look for a more regimented image of designer tracksuits and trainers which although making him look like a “liquorish allsort” signify the shedding of his old personality. He must adopt the clothes and in turn the mentality the gang requires. The stylish branded tracksuits add not merely glamorised nostalgia and sleekness but also remind the audience of the dangerously homogenising power of gang cultures and organised hierarchies as a whole. In a scene in the local pub we see Dominic wearing the same clothes as Bex in an almost homoerotic act of idolisation. Following a humiliating mockery at the hands of the firm’s second in command, Dominic is sent into a downward shame spiral. It is moments such as this where Love’s desire to make his film different from other football films shines through; through clothing we witness the young man struggling to come to terms with his feelings towards what it means to be masculine and having one’s own identity.

That said the film whilst sensibly avoiding long scenes of needless violence still doesn’t really break away from the mould of its predecessors (Green Street, Football Factory etc). Unlike its older and more superior classmate- Shane Meadows’ This Is England (which like so many British films of late, it is indebted to), The Firm gives no real motivation for the mob’s thirst for violent clashes with the rival firms. Yes, Dominic is looking to break free from his dreary life of normality, but for a film that spends so much time filming the firm itself it gives no real explanation or motivation for “putting 125 stitches” in the rival mob leader’s face. The football aspect is largely non-existent; not once do we see the passion of the game and its devotees.

Only once do we really get a sense of the pain behind Mob leader Bex’s frustrations. In a painful scene we witness Bex playing with his child before ringing up his Milwall counterpart, the comically named Yeti, to organize a fracas in London Bridge. Unaware that his baby is searching in his jacket, Bex continues his poisonous exchange with the Yeti. And in what is the most disturbing scene in the film, we see the baby remove Bex’s Stanley knife from his pocket before using it as a lollipop. Only then do we catch a glimpse of Bex’s emotional struggle. But even this realisation is a fleeting one, after he casually relays to the mob, how his baby “got hold of his Stanley… ”,  before casually proceeding to rally his troops into another big fight, this time with bats and knives.

The strengths of the film occur not when we witness Bex’s overwhelming dialogues of how ‘him and his boys’ will smash the living daylights out of the other mobs, vowing to be crowned supreme thugs of England and beyond. Rather the best parts of the film involve Dominic struggling to find his own identity, struggling to become a man, and Love’s comically accurate portrayal of the dialogue between a teenager and his family. With the football hooligan genre already dense and overcrowded the presence of yet another half-baked examination of the underbelly of football culture seems a bit uninspiring. In addition, Nick Love was already stepping into dangerous territory by adapting the critically acclaimed TV Programme of the same name. The Firm, whilst being commendable for its tendency to steer clear of scenes of extended violence to create excitement, ultimately fails to give the characters any real sort of psychological complexity. Yes, they are performed well but surely the actors must have been annoyed that their characters are little more than clichés.