Skip to main content
Photo by Newfrontiers at flickr.com 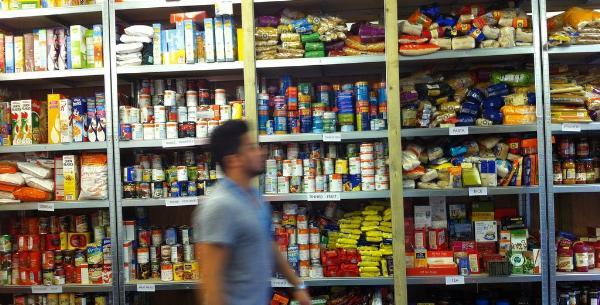 The growth in the number of food banks in the UK in recent years has been something of a divisive issue, with some people praising this form of support for vulnerable people and others criticising the approach to the problem of UK poverty that food banks embody. ‘A food bank is, and always should be, a short term response to a particular crisis,’ says Paul Chitnis – so what is the long term solution, and how should Christians be addressing this crisis?

Is there anything which demands our righteous anger more than the brutal, wilful injustice which condemns 870 million people to go to bed hungry each night?  And this, in a world where malnutrition among the wealthy is steadily rising in the form of diabetes and obesity.

Death is, of course, a necessary part of life.  But the futile emptiness of a man-made death, which hunger always represents, seems to cheat death of any meaning.

In the war-ravaged savannah of southern Sudan before independence, where decades of conflict had left millions of people without food, I met a young mother carrying a small wicker basket on top of her head.  She had walked many miles in the scorching sun to meet me and as she lowered the basket, I saw that inside lay her twin children aged eighteen months.  They were so sick and emaciated that I mistook them for newborn babies. The most awful moment came when their mother placed each limp child to her wasted breasts to feed them what little milk she had.

I remember thinking that, because poverty and hunger are neither necessary nor inevitable, this woman and her children were yet more innocent victims of the sickeningly inequitable distribution of food and resources in our global economy.  Food aid to southern Sudan was essential in saving the lives of millions of people but it certainly was not the answer to the structural problems which gave rise to the conflict and which still persist as we have seen in recent weeks.

Of course, southern Sudan was an impoverished, war-torn country in Africa, where food aid in response to a humanitarian crisis is not unusual.  Surely food aid in the UK, a country of enormous wealth, is an entirely different matter.

Edwina Currie, the former Conservative minister, thinks so.  She refuses to believe that people in the UK are going hungry. Her Twitter feed is littered with her view that food banks are unnecessary because giving alcoholics, for example, tinned soup does not solve their problem.  She said that people attending food banks should not spend money on tattoos and dogs. She also believes that if food is offered free, people will queue up to take it.

The response to Currie’s comments has been largely critical, accusing her, amongst other things, of a lack of compassion.  And who can blame a British politician for feeling embarrassed at the growing number of people using food banks?  However, I wonder if these criticisms are wholly unjustified.

It is hard to disagree with Currie’s view that food banks are not the answer to hunger, poverty and mental illness in the UK any more than food aid was the answer to the war in southern Sudan.  A food bank is, and always should be, a short term response to a particular crisis.  It can also have unintended consequences; for example, creating dependency or undermining local food production if not managed carefully.

Joey Ferrigno is the manager of a food bank based at the Jesuit-run university chaplaincy in Manchester.  He points out that you cannot just walk in off the street into a food bank to obtain food: you have to be referred by other agencies, most of which are government-run. This contradicts the freeloading stereotype that some people have of food bank clients. And the food provision is scarcely a feast: three days of food provided three times over six months, if required.  His clients are referred because of a variety of needs including benefit changes or delays, domestic violence, debt and low pay.

Ferrigno is highly discerning about the reasons for food banks.  Some are policy related and others reflect the complex web of social problems which affect contemporary Britain.  He is also keen to stress that food banks are a kind of community hub to which people come not just for food but to receive support with a wide range of needs.  In other words, a lack of food is often a symptom of a deeper structural or personal problem.

‘It takes a lot of courage to walk through the door of a food bank’, says Ferrigno, referring to the innate sense of shame that many people feel.  The material misery caused by low income, poor housing, relationship breakdown and loss of livelihood is devastating.  It breeds fear and a sense of worthlessness which can easily fester and corrode from within.  This, in turn, leads to a human misery which is so much more difficult to tackle: the erosion of self-worth, the indignity of being dependent on others, the terror of life and relationships ebbing beyond one’s control.

St Ignatius, the founder of the Jesuits, insisted that his companions become involved in ministering to the poor and the needy.  Determined to ‘help souls’, Ignatius translated a rather vague desire into concrete projects.  For example, he founded a house in Rome to care for and, wherever possible, rescue women who had become prostitutes.  When someone pointed out to Ignatius that many of these women would fall back into prostitution, he responded by saying that if, out of love of Christ, just one of these women gave up sinning for a single night, all his efforts would be rewarded.

But St Ignatius also knew that it would be better to prevent prostitution in the first place.  So he supported a group called, somewhat pointedly, ‘The Society of Wretched Young Women’.  He did much to rescue very young girls from an environment that would inevitably lead them into prostitution. Ignatius was not content to view prostitution through a narrow lens but to set it in a wider societal context.

This is surely the authentic Christian approach.  The Trussell Trust, to which the Manchester food bank belongs, is the largest provider of food banks in the UK.  It is an organisation ‘motivated by Jesus’ teaching on poverty and injustice’, which believes ‘in turning faith into practical action, living out God’s love for the poor...’  In 2012-13 its 400 food banks fed 347,000 people nationwide. Of those helped, 127,000 were children. The Trussell Trust claims that the rising cost of food and fuel combined with static income, high unemployment and changes to benefits are causing more and more people to turn to food banks for help.

In the Spiritual Exercises, St Ignatius invites the retreatant to adopt the same sentiments as Christ.  This means doing what Jesus did, with the sentiments of His heart.  I am certain that if Our Lord were to be physically present today, we would find him at a food bank, compassionately and generously helping those who had the courage to call.  But we would also find Him doing something to change the underlying causes of poverty, whether in the UK or overseas.

Pope Francis seeks to illuminate this point.  He refers to the command that Jesus gave in response to the disciples asking him to give food to a crowd: ‘You yourselves give them something to eat.’ (Mark 6:37)

The Pope teaches that this, ‘means working to eliminate the structural causes of poverty and to promote the integral development of the poor, as well as small daily acts of solidarity in meeting (their) real needs…’  (Evangelii Gaudium, §188)

Food aid in the UK is a sad but necessary response to the sizeable number of people in 21st century Britain who find it hard to make ends meet.  Christians, in response to Jesus’s command to ‘give them something to eat’, are recognising that if our efforts can alleviate the pain of hunger for even one day, it is worth doing.  But they are not the answer to the needs of people in the UK.  For this, we need to look more deeply at the human attitudes and political structures which cause poverty, inequality and hunger at home and overseas.

Paul Chitnis is the Director of Jesuit Missions.