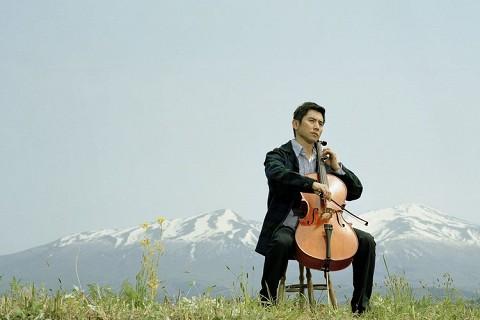 Daigo Kobayashi (Masahiro Motoki) wants to make a career as a concert cellist, but the orchestra he plays with in Tokyo folds and he is forced to return with his young wife to his hometown in the country. He looks around for a job and stumbles across one that he thinks is part of the tourist industry but turns out to be about dealing with death. He becomes apprenticed to an ‘encoffiner’ a sub-class of Japanese undertakers, who do the highly ritualised business of preparing and placing the body of the deceased in its coffin.

This is normally done in the presence of the family and therefore requires extreme sensitivity and delicacy, even involving putting make-up on the face of the deceased. The encoffining ceremony is an emotion-charged moment of farewell for the next of kin and so how the encoffiners do their job makes a crucial difference for the mourners. However although such men are required and even in a way appreciated by Japanese society, they are frequently shunned as ‘unclean’. Hence Daigo keeps his new job secret from his wife.

His first experiences are a baptism of fire (one in particular is not for the squeamish) but the artist in him is slowly drawn to the beauty and power of the ritual involved in the work and indeed much of the feeling in this unusual film resides in the depiction of these scenes. An understated sub-theme is the developing relationship with his gruff, elderly boss who becomes a substitute for the father who abandoned Daigo and his mother when he was six years old.

The encoffining work leads Daigo to start playing the cello again, this time not for money or ambition but to nourish his own spiritual needs and those around him. The theme-melody of the film has a simple, haunting beauty which might send the viewer to the DVD shop.

Eventually Daigo’s wife finds out what he is doing and, unable to persuade him to do a ‘normal job’, walks out. She returns when she discovers she is pregnant and uses the pregnancy to try to manipulate him into leaving his job. Does he want to have to tell his child that he is an encoffiner? she asks. However the death of a mutual friend for whom Daigo performs the encoffining ceremony, affects a powerful moment of understanding for his wife and a change of heart.

This major unlocking of an emotional logjam for her is followed by an even greater one for him. He gets the news that his long-estranged father has died. He now has to decide whether to attend the funeral or not. Somewhat predictably he ends up doing the encoffining of his own father, which is a pivotal moment in the drama.

The film is shot through with beauty: the snow-covered mountain of his hometown, his orchestra playing the ‘Ode to Joy’ in Beethoven's 9th, the subtle choreography of Japanese greetings and of course the highly ritualised encoffining scenes. There is also hope (including hope for life after death) and humour. All solemn rituals go hilariously awry sometimes. And even people who deal with cadavers have to eat. Thus Daigo’s boss has a healthy appetite and he encourages his employees not to allow the nature of their work to get in the way of a decent meal.

It intrigued me that some top reviewers sneered at this film, distancing themselves from its deep emotion by mocking it as ‘sentimental’. It seemed to me (and to many who responded to their reviews) that these commentators were struggling to face the earthy facts of death and how ordinary people can be helped to come to terms with it by their traditional funeral rites. However, I imagine that the average Catholic viewer will relate immediately to the focus on ritual and the way it symbolically eases people through the difficult or even unbearable events of life.

To my mind, Departures deserves all the awards it has taken.

What is Marriage? Man and Woman: A Defence