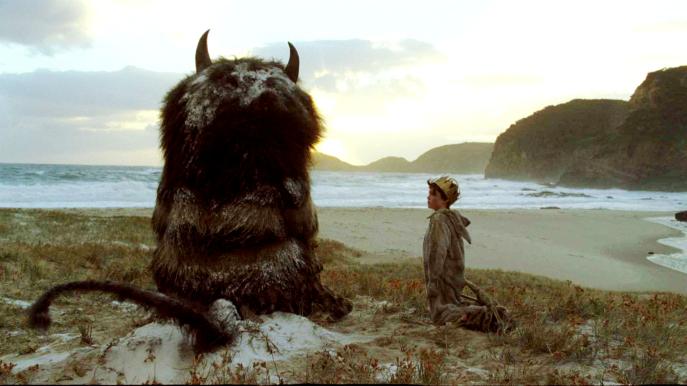 Max is the child fleeing from his frustrations with his imperfect, lonely life – solo mother stressed out with it all, older sister whose boyfriends are too big for Max’s games – leaping from wildness to vulnerability, wrestling his dog to the floor then crying as his igloo is squashed with him in it. His temper whips out in frustration and through his howls he enters the mirror world of the wild things. Under big skies he sails to an island inhabited by this unhappy group of creatures who believe his tales of his own greatness and make him their king. What unfolds is Max’s attempt to create the perfect community, where the only things that are allowed to happen are those that should happen, and anyone who isn’t allowed in gets their brains eaten out.

But this is no childish film. Each monster characterises a human need. Carol takes pleasure in his bigness, wants to protect everyone and lashes out when his adoration isn’t returned. Alex the goat complains that no one ever listens to him and is hurt by all the rough rumpus they conjure up. There’s Judith, whose downward predictions save her from raising any hopes. The list goes on, and if the characterisations sound trite here the fault is in the description rather than the film. Each monster is strikingly real. Each performs for love and repeats the performance even though they are never satisfied with the love they receive back. It’s impossible to watch this and not think:  there’s me – there’s my friend X – I remember her doing that to me – that’s what I do when I feel unloved! The young boy seated behind me grew bored of the film after the first appearance of the monsters; his parents sat in rapt silence.

This community of monsters is a community of people that flit between child-like and adult behaviour. Max is the king and then the child; the monsters have seen it all before yet hope that with him it will be different. If there wasn’t so much love in the film it would be debilitating viewing: how are humans meant to get by with each other if our needs are so immodest and our disappointment with each other so bitter? The wild things are caught in a trap of repetition, their memories of hurt and wound keeping them warm.

At times the tone and slowness of the film feels like an aunt giving you a didactic lecture that you know to be true but still want to hurry up to the conclusion. Thankfully Jonze resists this. It’s no structured fairytale: no magic quest for Max to go on that will solve each of the monsters’ weakness. The symbol of forgiveness between him and his mother with which it ends, Max’s eyes opened slightly more to her vulnerability, is the softer and truer climax. Wild things they may all be – but by the end you want to hug the whole metaphorical lot of them.

Grey Wisdom: not quite the last word on religious pluralism
Counting Sabbath days in pandemic days
Aging, Retirement and Christianity
Daniel Berrigan SJ: Going back to the poetry
Spiritual and Religious: The Benefits of Being Both