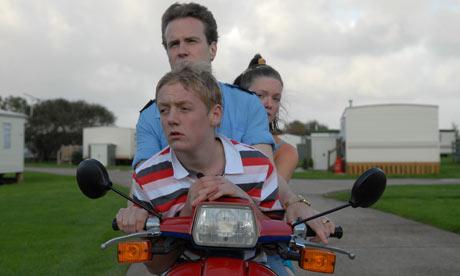 
In July 2008 I saw a short community film called Whispers, made by some talented sixth-formers about life in school; it concludes with some out-takes. In one of them, an eleven-year old girl called Ida Poulssen cracks a joke.  Sitting with one of the other actors on some stairs outside a classroom she takes a line of the script, but twists it: ‘I’ve got something to tell you – I’m pregnant;’ and then she collapses with laughter at her own wit.

When eleven year olds – even perceptive and well-taught ones – notice such plot clichés, writers and film-makers should really pay attention and conclude that there are some plot motifs that, after years and years of soap operas, are just impossible to use any more.

One of the issues with The Scouting Book for Boys is the slow ‘turn the screw’ effect of these commonplace plot ideas, which undermine the more original insights of the piece.   There are no Eastenders cliff-hangers exactly, but about half-way through the teenage Emily (Holliday Grainger) does finally get to tell us all that she is indeed pregnant.  It’s a revelation that was greeted in the cinema with a kind of quiet sigh of regret by all around – less for Emily’s loss of innocence than for the tedious inevitability of the moment.

It begins so promisingly, with some interesting tracking shots thorough the bizarre setting of a caravan park, well-observed extreme close-ups, and an eye for the absurd detail of English provincial life that draws heavily on Mike Leigh and Martin Parr.  After the scene is so nicely set, we learn gradually that fourteen year-old Emily lives in a caravan with her drunken mother.  She and her best friend David live on the holiday park where their parents work as support staff or cheesy entertainers.  Emily’s mother is (pretty predictably) deemed incompetent to look after her and Emily is consequently to return to her father, something she is very reluctant to do (though we never learn exactly why).  The news forces Emily to run away from home and, with the help of David, she hides in a cave.  Everything ramps up with the involvement of the police and their interest in Emily’s relationship with an older man who also works on the site.  I don’t think it’s giving much away to say that the residents eventually turn on this man in a hue-and-cry against paedophiles that simply adds to that quality of pathetic, tragic, inevitability about the plot.

Emily’s drunken mother (half-empty chardonnay bottle in hand) bears such a striking resemblance to Amy Winehouse that this reviewer thought she was Amy Winehouse.  She’s not – the character is played by Susan Lynch.  But a key weakness in the whole piece is down to clunks like this, where the ensemble pulls apart:  this collection of actors did not gel, and that is principally down to casting.  Someone decided that you could get a twenty-two year old woman and an eighteen-year old man to play children of fourteen.  This sort of thing occasionally works in theatre, where the audience is somewhat further away, but under the camera’s perceptive gaze the result is stagey and over-blown, resulting in a quality that film people call ‘mugging’.  It’s also just a bit weird – disturbing, but I suspect unintentionally so.

That’s not to say that they aren’t good performances, they’re just in the wrong place.  Thomas Turgoose (This is England, Somers Town) is particularly mesmerising as cramped, confused, sex-starved David.  But he’s been dealt a loosing hand in a script that fails to explain key elements in his character development.

It’s a shame, really, because there’s so much in Tom Harper’s first feature that’s interesting.  Particularly lovely are the extreme close-ups.  These use a very shallow depth of field to capture tiny details of the skin, faces and bodies of Emily and David, and thus create a special sense of intimacy that counterpoints nicely with the luscious shots of the Norfolk landscape.  There’s also one genuinely shocking moment of unexpected violence – but a flash of real drama destroyed by some lumpen sound-effects and cumbersome camera tricks.

The film is full of ideas, but too many, and a many that don’t cohere – the result is clunky, often over-theatrical and very dissatisfying.


THE SCOUTING BOOK FOR BOYS TRAILER - In cinemas 19 March

In search of mental wealth

Heaven on earth: On conversion, vocation and Religious Life