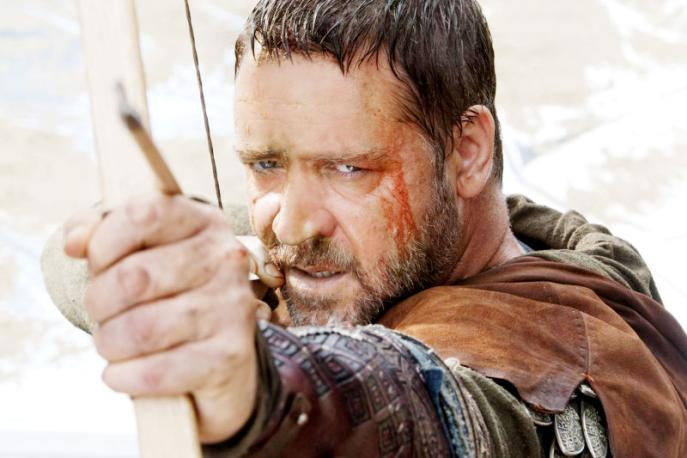 
Accents can be dangerous things – I was once thrown out of a car for the jocose use of the sort of ‘standard Northern’ that Russell Crowe deploys in Robin Hood. Mind you, Russell Crowe’s accent seems to have got him into more trouble than mine did. Admittedly, when I was ejected from the car, the driver (a Yorkshireman, inevitably) was angry about much more than my insensitive use of a regional accent. But that’s not important, right now.

But my accent was at least consistent. Though to be fair to Russell Crowe, his is not the worst accent in this film – that prize goes to the Canadian Kevin Durand playing Little John with what I think is meant to be an Ulster brogue, though I’m not entirely sure. The second prize for Hollywood Dodgy Accent of the Year goes to Will Scarlet (Scott Grimes). Grimes does some voice work for the cartoon series American Dad, but here, his ‘Welsh’ accent is as unconvincing as his artificially enhanced red hair.

Crowe’s controversially Yorkshire characterisation is one of a number of attempts to ‘do things differently’ that make this version of Robin Hood tolerably entertaining. Here are what this reviewer considers to be the three other good bits:

1. Robin Hood and Marian are developed as a middle-aged love-story, a slow burn attraction of commitment and a marriage based on heroism, decision and sacrifice, rather than some preposterous fantasy of courtly love;

2. Crowe makes Robin Hood into a working-class hero, a common long-bow man who emerges from the rough and raucous life of the rural labouring poor;

3. The war-fighting bits are great (but then, they always are, these days).

There are however, some absolute stinkers in this film, and not just the slippery accents. There is a shockingly clunky bit of history-lesson-in-dialogue in the opening moments of the film, where Eleanor of Aquitaine and her son John declaim their dislike for each other, and go into extraordinary detail about the political and historical consequences of their distaste. It’s a bit like watching a family quarrel at Christmas time where one angry relative links the quality of the turkey to the economic situation in Greece, and another ripostes by explaining that the choice of Christmas presents is a further example of the policy failures of the Blair government. It’s the sort of ham-fisted attempt at filling-in the backstory that you wouldn’t even be able to get away with on Casualty these days.

This attempt to give the film a claim to historical accuracy seems particularly bankrupt given the gradual descent into fantasy that occurs as the two hours unravel: minor slips in heraldry pale into insignificance in a film in which the French invade England in Operation Overlord style landing craft, Maid Marian rides into battle like Joan of Arc, and in which Robin Hood is transmogrified into a revolutionary leader whose rhetoric results in a draft of the Magna Carta. What nonsense.

That’s only the half of it: Russell Crowe and Ridley Scott’s Robin Hood is not merely a national hero, he’s a man, a real man, a man with a tortured past, whose warlike soul masks a lost childhood and a brutal separation from a loving father. And there’s more – that father was no ordinary peasant dad, but a great mason, a cathedral-builder, who led a rebellion against oppression in his day, as his son would come to do so in his own. It’s a thoroughly laboured attempt at developing a father-son theme that readers will recognise from Gladiator, where Russell Crowe was father to a murdered son, who would have his revenge in this world or the next. Though it worked so well in Gladiator, on this occasion even Max Von Sidow couldn’t save this element of the film from a dutiful sense of box-ticking obligation.

There’s also the moment where Robin, serving with the crusades in France, challenges King John on his decision to massacre 12,000 Saracens. Perhaps this is one of those interesting moments where societies remake mythical heroes to tell the stories of their time – and how wonderful that Robin Hood could become a hero of multi-culturalism. Alternatively, it’s just nonsense, and someone should have had the courage to tell Ridley Scott that you could type this sort of stuff, but you really shouldn’t get people to say it.