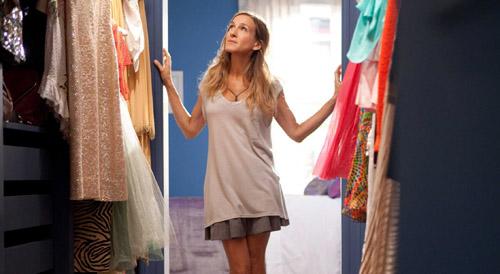 
The critics have had a PC feast over the Sex And The City (SATC) sequel, branding it from anti-Muslim to homophobic and degrading to women. Reviewers have lined up in succession to declare their disgust at the morally bankrupt film and now even the fans have given up defending the SATC girls – but what has changed since the series?

We meet Carrie, Charlotte, Miranda and Samantha two years after the previous film. Carrie and Big are dealing with married life; Charlotte is raising her children (with the help of a braless Irish nanny); Miranda has a new boss who doesn’t respect her because she is a woman; and Samantha is determined to defeat her menopause in favour of an eternal sexual appetite. Potential PR work sends Samantha to Abu Dhabi and the all-expenses paid invitation is extended to all the ladies. They arrive to discover themselves in absolute luxury, starting with a private jet which takes them to their own chauffeur-driven Mercedes, an exclusive penthouse and their own private butlers. Samantha supposedly has sex on the beach and Carrie shares a kiss with an ex and....

.....Well that’s it. Nothing else happens. They go to Abu Dhabi, reflect on their lives and then return. Unfortunately the lack of a plot is not an exaggeration; there is no action and resolution, no substantial changes, anything to overcome or a climax. The short-lived and flaky plot lines that do surface are dealt with in a flippant and predictable manner.

As a Sex and the City fan, I recognised the last film wasn’t a masterpiece but I adored it nonetheless and with millions of others waited in anticipation for this sequel. The HBO series provided us with the escapism of the stunning and unaffordable clothes and lifestyle, allowing us to indulge in the shallow side of a grown woman’s fantasy. The glamorous side (and costume budget) developed and sophisticated throughout the series. Many aspects of their lifestyle were financially unrealistic but we (SATC fans) didn’t care because we were always grounded with those ‘real people’ moments. Like Carrie falling in Gucci, getting dumped by post-it or those familiar scenes of a bad date. The first movie went on to satisfy our cravings for more of this reality/fantasy combination that encompassed our lavish wants with our everyday realities.

The writer has opted for fantasy over reality and when we do see them experience problems and difficulties they frankly just seem spoilt and whiney. This is exemplified when Charlotte opens up and discusses her struggles about raising children, a moment of potential authenticity until it is smashed into a million pieces with the declaration: ‘What do the women without help do!?’.

The show polarised the prudish Charlotte with the crude Samantha and let us identify with each of the characters to different degrees at different moments. The series made us feel proud to be strong, independent and sexy women and provided us with a witty female take on sex and relationships.

This film focuses on the vanity, self absorption and excessive consumerism that may indeed be present in our culture but the celebration of it proves to be an embarrassing display of behaviour. Things were taken to a whole new embarrassing level with the shockingly blatant product placement: Suzanne Somer’s hormone replacement therapy and Pringles (Carrie actually held the box to the side of her face and posed). It is at these points that we realise the girls have become less about independence, self-discovery and giving women a voice and more about middle-class superiority and self-importance. It appears the success and fame of the characters has led to the three dimensional, subtly complex characters becoming overacted caricatures of their previous existence. The women may have some of the same mannerisms and catchphrases but sadly the characters have become unrecognisable parodies of the girls from the series and their stories no longer transmit to a wider audience. I would say that SATC2 was a case of style over substance, but honestly many of the costumes were neither flattering nor groundbreaking fashion statements.

Admittedly I did laugh out loud on numerous occasions during the film, but on balance I cringed more. The series was a well written show, albeit with its fair share of cheesy puns and extended metaphors; this film was far more slapstick and focused on those embarrassing puns (while eating a date: ‘I've got a date already!’).

On the topic of poor humour, the film has been picked up on for its insensitivity towards Islamic culture which begs the question, why was it set in Abu Dhabi of all places? Having been refused permission to actually shoot in Abu Dhabi and being forced to film in Morocco meant the filmmakers were under no delusions about the controversy it would cause. SATC was never meant to be and has never been sensitive or politically correct. The series discussed often controversial topics like sex, drugs, race and religion in a very candid way and many of us loved its inappropriateness. In some ways, I admire their commitment to not conforming to PC demands and portraying a realistic reaction of four such women to such a different culture. Natural curiosity I can understand, many of us may have wondered how women eat in public whilst wearing a burka, but the presumption that Islamic women are suppressed and poorly treated has a distinct stench of American superiority and became increasingly patronising. What they inadvertently and rather ironically achieved is a belittling their own culture by unintentionally revealing and reinforcing the stereotype of the loud and garish Americans abroad who pity anyone that does not live their way of life.

It frustrates me that many of the reviewers still target the film for the display of crude female behavior in a way that they never inflict on the male screen equivalents. In addition, the women have received a verbal bashing for looking older – why are these very attractive women being sneered at simply because they are older and look older? The hypocrisy in criticising the film for representing women so superficially and then in the same breath judging the film on how ‘haggard’ the women look is overwhelming. How many scripts are written for women? Not many and when one is, it is immediately under attack based on appearance and how they ‘represent women’. Why does a woman on stage have to take this responsibility while their male counterparts can play slutty, violent, selfish or ignorant without any kind of social responsibility?

If we are going to criticise this film then can we please do it for relevant reasons: the overacting, the demise of four brilliant characters, and the lack of plot. Especially and most unforgivably is the fact that Carrie still (this has been noted during the series) does not understand how to appropriately use an apostrophe as demonstrated by this inaccurate use of punctuation: ‘Terrible two’s’.

Talking about terrible 2s .... that’s all I need to say about SATC2.