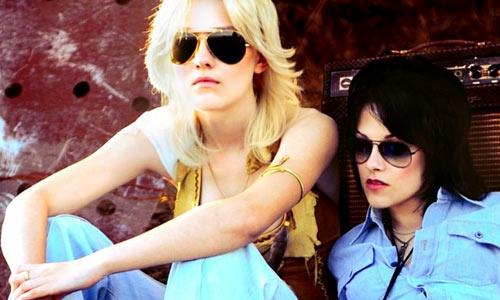 
1975 and the female music stars to which a young girl might aspire include Joan Boaz, Joni Mitchell and Ella Fitzgerald; in London, the Sex Pistols are playing their first gigs; rock, and what will become punk, are men’s games. For women, the choices might have seemed to be limited to jazz or acoustic: musical passion had to be clothed with wit, grace and elegance. But what if you wanted to dress up and go wild? The Runaways charts the life of the eponymous band, made up of five teenage girls in California – the growth and success, followed by the inevitable drug and ego-fuelled collapse. If it sounds like a stereotype then this is because what bands tend to do, and the film reaches out beyond historical fact into a fun, at times challenging, depiction of what happened during the band’s explosion and implosion.

The film centres on lead singer Cherie Currie and Joan Jett. It’s very much Joan’s story, even though the screenplay is based on Cherie’s book Neon Angel. Joan was one of the film’s executive producers and in this light the characterisation becomes quite interesting – Cherie is a character to whom things happen, whether it’s her being chosen for the band from a nightclub where she’s sitting pouting, or being taught to sing, or losing out in her battle with drugs. Joan, on the other hand, is the dark-haired and anarchic rock star; the film stops with Cherie working in a wedding salon listening to her ex-band mate being interviewed about her solo work on the radio.

As with all films about youth, The Runaways is about awakenings and energy. Its opening shot is of Cherie being surprised by her first period, her older sister taking charge as the younger sibling starts to panic. Then it’s the boredom of the girls’ hometown, the dreariness towards which life seems to be heading (alleviated by dreams of Bowie and Suzi Quatro). Audiences are used to seeing the journeys towards adulthood of adolescent boys and it is striking to see the girls engage in the behaviour one might expect from any touring band of teenagers facing adulation and freedom. This is part of the girls’ ambition – to have as much fun as the boys do – and the montages of the tours are stylishly done and unnerving, patched pieces of memory put surreally together; probably very similar to what remembering a punk rock band’s world tour is like.

This energy is harnessed and capitalised on by the wonderfully odd producer, Kim Fowley. The film is at its best in the line it treads with Kim. He’s upfront about his commercial interest in The Runaways, and they were, in a sense, as pre-fab as any of the clones marching towards Number One today, but side by side with his business sense is a real sense of fun. His is the studied eccentricity that masks a love of performing for performance’s sake. The girls get screwed over, as you know they always will, but there’s little sense of bitterness; as Joan and he scream at each other on either side of a studio’s soundproof glass he’s clearly loving the fact that they will no longer do what he tells them to.

The question of exploitation lies at the heart of The Runaways and it doesn’t pull back in showing some of the liberties that were taken with the girls: most of all with Cherie, who is pulled out of her house one afternoon and made to perform in an under-dressed photo shoot for publicity shots. Watching her be ordered to pose like a “good dog” is quite shocking – she’s played by Dakota Fanning, a sixteen year-old who actually looks like a sixteen year old, and you suddenly remember that for all her snarling and posturing, she’s very vulnerable. The film itself slips into a lazy exploitation of the girls during the tour in Japan, when there’s lots of soft focus cherry-red lipstick, but it generally manages to keep its cool.

The Runaway’s loveliness doesn’t come from its pretty young faces but from its capture of the heady frustration of creativity and boredom. It’s the dissatisfaction that Joan, the artist, feels with the ways things have been said, of the limited possibilities that life seems to be presenting, when every day is silent and grey – and the refusal to accept the monoliths and conformity that are being offered her. This is the spark of divine creativity breaking out in the gloom – and if the music is to your taste too, then it’s a heady mix.

Saving liberalism from itself

The Continuing Significance of Bernard Lonergan

John the Baptist in Advent
Waiting for the King
Amazonia as a mirror of humanity
Spiritual and Religious: The Benefits of Being Both
What is Ignatian leadership?