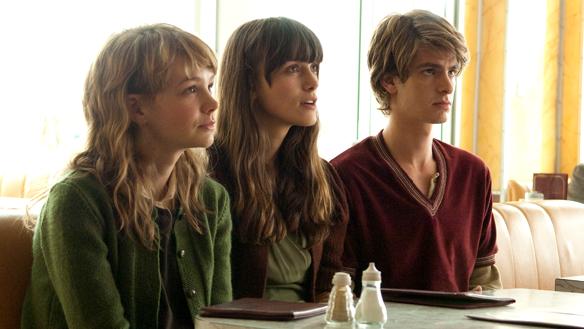 
The 2010 London Film Festival opened on Wednesday with an adaptation of Kazuo Ishiguro’s novel Never Let Me Go. It is a strong beginning to the Festival, which has a wide spread of films over the next fortnight, many of which will be on full release in the UK over the coming months. Never Let Me Go strikes a firm note between seriousness and populism – it’s likely to become heralded as another success in Ishiguro’s roster of novels and films.

Although in terms of its themes Never Let Me Go looks back to Brave New World, its most recent tonal partner would be the adaptation of Ian McEwan’s Atonement; not only for Keira Knightley getting her smile into another semi-period drama, but for its scope: here are three lives laid out from childhood to death. Kathy, Ruth and Tommy begin the film in Hailsham boarding school, whose idiosyncrasies to them are an unquestioned part of the fabric of an adult world that always seem capricious and odd. The story is told through the eyes of Kathy, who watches both Ruth and Tommy move toward their deaths.

Their world in the early ‘70s in Britain seems normal enough, until the flickers of strangeness become more consistent – the tagged wristband that they must check against the scanners whenever they leave or enter a building; the distance which the children are kept from the lives of those outside the school, and the buildings where they spend their adult lives; the apocalyptic stories the children are told to keep them obedient. This is story-telling as done by a novelist in firm control: not only does the minimal information invite us into the revelations of the children, but it forces us to watch with full attention. The speed at which we absorb a novel in comparison to a film gives an author much more scope to lay down details whose counterparts will rear their heads in later chapters, but on the screen Never Let Me Go still works in the same way. The batch of pornographic magazines that Kathy discovers at 18, for example, are explained to us a decade later, their true significance left hidden at the time.

Never Let Me Go, perhaps inadvertently, is one of the most Catholic films I’ve watched in a long time. To explain this without giving too much away: its emphasis, both in the dystopia it creates and in its emotive force, is at the furthest reach possible from a utilitarian view of human life. ‘We didn’t use the gallery to look into your souls,’ the adult Kathy and Tommy are told, ‘we used them to see if you had souls at all.’ These aren’t souls in the vague way that souls and ‘energy’ were harvested in The Matrix, these are souls as the term used to describe the unique, divinely inspired right to being human that Catholicism demands for all individuals. The children grow up as mere tools struggling to defend themselves as important in their own right: the semi-fictional society in which they live is ours, with a few of its utilitarian tendencies extrapolated down a line of realistic social logic – if we can defeat death and illness through a sacrifice of a few, why would we not want to?

If the film was simply a lecture in bioethics however, no matter how true its argument, it would never reach mass appeal. In Vladimir Nabakov’s Ada or Ardor, Van Veen discovers a way to measure the ‘texture of time’ through the distance moved from childhood and adolescent love, and Never Let Me Go operates in a similar vein. Here the relationship between Tommy and the two girls, though necessarily simplified from its portrayal in the novel, acts as the tangible sweetness from which the three lives depart. Their romances in this case are their souls, lived; and it is this that will capture the popular imagination, rather than any well-formed essay or apologetic on the innate sanctity of human life – think of Juno and how it succeeded in stimulating imaginations around the questions of teen pregnancy more effectively than any official program will.

Ruth’s attempts at healing the relationship between the three of them as her death closes in makes explicit the metaphor that has run beneath the story – the foreshortened lives of the children mirror the narrowing effect that mortality has on all of our earthly lives. Kathy makes the link between the children’s lives – filled with the operations of obscure forces beyond their control, repeated losses, and ultimately in the irony of the euphemism for death that they all use – ‘completion’ – that by the end, so much can feel incomplete – and the lives of those for whom they have been bred to serve. Though the film carries with it this very materialistic sense of death closing everything, it’s hard not to feel sympathetic with this experience of life, especially during the moments when the truth of life after death feels like something said in another language. Never Let Me Go is a mature film made in worrying times, and Catholic viewers will find deep resonances in its narrative.