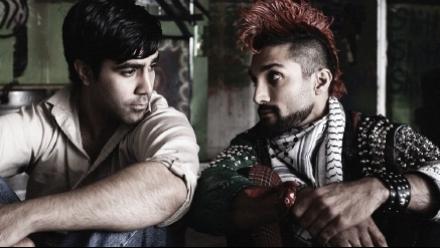 
Oddly enough there are two films about Taqwacore, the Islamic punk scene that began life as a novel. As befits its genesis, one is a documentary and one fictional. The curators of the London Film Festival chose The Taqwacores to appear in the festival and I think they might have been better off choosing the documentary Taqwacore: The Birth of Punk Islam; though The Taqwacores is entertaining enough, it’s of more interest as a cultural artefact than it is as a story.

The Taqwacores is also the name of the novel that inspired the real life musicians to fuse together their faith with their musical tastes. Written by Michael Mohammed Knight, a convert to Islam, it charts his rebellion against his white-supremacist father and then later, against the more authoritarian religious leaders; in one direction his rebellion took him to Islam, in the second movement, towards punk. His story might have ended there had his novel not touched chords (presumably C, F and G) with similarly positioned musicians across the US.

What the film The Taqwacores gives us is a kind of North American The Young Ones, with Yusef the square guy who turns up at the student house of punks and rejects to learn that his previous worldview was so limited and he just needs to embrace reality with all its craziness, man. The film has been heralded for portraying Muslims as ‘cool’ and though for anyone with half an imagination it’s no surprise that you can be Muslim as well as being gay, funny, drunk, or philosophical, it is an indictment of mainstream films’ homogeneity that for a Muslim character not to be a villain is still an achievement.

The initial interest fades however, as you realise that the story is going to be a standard discovery arc for our Yusef. He meets the spiritually liberated nymphet who makes a shot at him and then rejects him because of his inexperience. He intervenes in the battles between Amazing Ayyub (think a version of Peep Show’s Super Hans before he ‘matured’) and the uptight Umar. He is the auditor of Jehangir’s wild dreams for a future free of sects and acceptance for all. These are all fairly stock happenings in the coming-of-age of any big screen nerd, and that’s no bad thing in itself; the flaw is that The Taqwacores isn’t quite cool enough a film to pull it off. The skater scene is a good example: the high jinx by the boys aren’t particularly high and seem very late ‘80s, when graffiti was still dangerous – as it is, I was reminded of the nice kids who play on the council-designated skate park on London’s South Bank, where tourists can take pictures and pose with them on their very small bikes.

There would have been more interest if the film had dissected the dynamics as to what makes a scene, but unlike, say The Wave, it doesn’t ever cut below the surface. There isn’t much of a critique of its mixed ideology of surrender to God and offensiveness through punk, though the tension is perhaps the point. In the climactic final party, despite its contrived ending, there is a memorable shot of Rabeya lifting up her burqa and spitting something awful into the face of one of the more dogmatic punks – this is probably the best capture of Taqwacore’s supposed philosophy, the fusion of rebellion and religion, the outsiders giving back as good as they get.

There’s also the question for adult viewers of the authenticity of their rebellion. I know nothing more of Michael Mohammed Knight’s story other than the facts above but it does seem that his rebellions were more of a running away rather than a running towards. In our world, truth is almost always rebellious, almost always counter-cultural: you don’t have to read too many of Jesus’ words to realise that obedience to the Father can make you a real social reject. Yusef’s rebellion from conformity finds him lying on his bed looking through a pornographic magazine – and is there anything more conformist than a young man bowing to peer pressure in this way? Jehangir’s revolution towards tolerance ends up turning back on itself – it’s the old liberal squat, wondering if you have be tolerant towards those who are intolerant, and thinking yourself into inaction or self-disgust – whereas a greater revolution of the heart suggests that tolerance in itself isn’t the main goal of being alive, and hence diffuses any false, intellectually liberal paradox.

If you intend to fulfil your quota of one punk-based film this year I’d probably recommend The Runaways rather than The Taqwacores, as unusual as the latter’s subject matter is. I’ll leave Jeffrey Lewis to see you out, he who knows a thing or two about growing out of tribal dressing –

I saw a hippy girl on 8th avenue
She barely looked at me for a second or two
and I suddenly realized I no longer looked much like a hippy…
I was talking to my friend Eric just to see what he thunk
and he said 'Jeff, it's weird but I no longer look like a punk’
I guess we don't need our clothes for an identity crutch
and we looked at each other and we didn't look like much
and we looked out at the world like a movie theatre
at all the hippies and the punks and the skinheads and the skaters
and someday or other maybe sooner or later
they'll come to the realization
that what's important is whether you can carry on
a human conversation and it's not what you wear on the outside
it's what you think and feel on the inside

(Jeffrey Lewis, ‘I Saw A Hippy Girl On 8th Avenue’ from It’s the Ones Who’ve Cracked That the Light Shines Through)

The Hiddenness of Priestly Life